“So what’s going on here then?” I ask. “Two good friends just got even better [friends],” replies TransferWise co-founder Kristo Käärmann laughing, while Monzo co-founder Tom Blomfield, who is also on the video call, smiles approvingly. “Sorry for spoiling your news,” I tell the pair, who I’m interviewing ahead of an announcement today that the two companies are working together.

The partnership, which TechCrunch outed nearly three weeks ago, will see TransferWise power international payments for the U.K. challenger bank’s 750,000 customers. It is the second new bank partnership that TransferWise has unveiled this month, after the fintech unicorn announced that it has begun working with France’s second largest bank BPCE Groupe.

TransferWise also powers international money transfer for Germany’s N26, and Estonia’s LHV. However, a previously announced partnership with the U.K.’s Starling Bank never materialised and has since been disbanded.

Asked why Monzo has chosen to work with TransferWise, Blomfield reiterates the challenger bank’s goal of becoming a “hub or control centre” for your money. This won’t necessarily all be done by Monzo, he says, “but with partner organisations who plug into this hub”. TransferWise is the first of these.

International payments has also been one of the most requested features by Monzo users since the challenger bank posted a roadmap of things it intends to “fix” over the next three months now that the switch from a pre-paid card to a full current account has been completed.

“I’ve personally been a TransferWise customer for five or six years and the service is amazing,” says Blomfield. “Compared to my old bank, it’s really, really transparent, the fees are really fair, and they’re continually working on bringing fees down and to make transfers more instantaneous. So I can’t think of a better partner to do foreign transfers with than TransferWise”.

I ask Käärmann how different the conversation is with a challenger bank like Monzo — which arguably has nothing to lose by partnering with TransferWise and will generate affiliate revenue on each transfer — compared with larger incumbent banks who have historically generated fat margins on foreign exchange fees. He says it is similar, and usually centres on the fact that customers are already using TransferWise and that if a bank wants to put those customers first it makes sense to offer TransferWise functionality within its own app.

“When we announced the large French bank, which is clearly an incumbent — a massive incumbent — they were thinking about their customer,” he says. “That maybe does feel a little bit rare for banks to think this way, but they figured that ‘if we are going to do this, then why don’t we do it properly’. They were actually fully driven by their users and thinking about how to get the best user experience”. 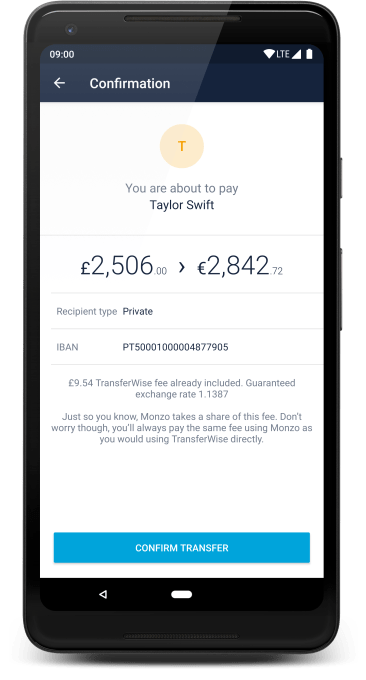 The TransferWise functionality will start rolling out to Monzo users as of today and will let them send money from their current account to 16 of the most popular currencies, with “more being added in the near future”. The user experience will be near-identical to TransferWise’s own app, and will see transfers happen at claimed ‘mid-market’ rates in addition to TransferWise’s low and transparent fee. This means you’re told upfront exactly how much you’ll pay in fees and the amount you’ll receive in the exchanged currency.

“One of the coolest things for us, other than just working with cool people, is there’s another bank in the U.K. who is transparent with their international fees,” says Käärmann. “We’re kind of getting to the place where once there is enough banks who are as transparent in their foreign fees as Monzo is then it becomes quite untenable for everyone else to keep hiding their fees and that’s very interesting. Not just for us as companies, but more generally in terms of how banking works”.

One notable dynamic to TransferWise adding another bank partner is that the fintech giant recently launched a banking product of its own. Positioned as a companion to your existing bank account, the TransferWise “Borderless” account and debit card lets you deposit, send and spend money in multiple currencies. Acting like a local country bank account, it is primarily designed to solve the specific problem of earning, receiving and spending money abroad and TransferWise says it is not intended to be a fully fledged bank replacement — at least not yet.

“We’re pretty chilled about it,” says Blomfield when I ask him if TransferWise’s tentative entry into the bank account space was in any way a concern. “Honestly, we are not competing with TransferWise. Both of us are looking at the big high street banks, as either partners or competitors. Our customers come from Barclays, Lloyds, HSBC and RBS. I think anything that increases both of our brand awareness is a really positive thing. We have 750,000 customers, which is something like 2 percent of the adult population, we’re targeting the other 98 percent who are still using the big banks. I just think there is so much headroom in this space that it would be crazy to think that we are competing with each other”.

“If we take a step back, what is the problem we are solving?” says Käärmann rhetorically. “The problem we are solving is that moving money across borders is expensive”. He then reiterates a point that TransferWise co-founder and Chairman Taavet Hinrikus has made often, which is that the company is entirely agnostic on how customers access the service. The more money moving via its infrastructure, the better, with economies of scale also meaning it has been able to lower fees on an increasing number of routes.

“For us, it doesn’t really matter if the money is in a bank account that is connected directly to TransferWise or if it is in the Borderless account,” he says. “There’s really no difference, and I know the user experience is better today if you’re banking in the U.K. with Monzo, so that’s what users should do”.

At this point I can’t resist mentioning Revolut, the digital bank startup and newly crowned unicorn that, on paper at least, competes with both TransferWise and Monzo. Revolut’s original “attack vector” (to borrow Blomfield’s phrase) was cheap foreign currency exchange coupled with a debit card for traveling. And although not yet a licensed bank, it has rolled out bank account features at a shockingly fast pace, putting it on feature parity with Monzo in a number of instances.

Rightly or wrongly, I put it to Käärmann that there is a market perception that Revolut is often the cheapest option when spending or sending money abroad, even if questions remain about how it determines prices, especially at weekends, or if the startup actually makes money on foreign exchange at all.

“When you talk about other people getting into that space, we should be happy if someone figures out how to do parts of it, some routes, better than us or faster than us or cheaper than us,” he says, somewhat diplomatically.

“I wish these things were sustainable as well. We’re super anti-subsidising, just because we think that over the long-term it doesn’t make sense to get some users paying for other users’ transfers or for some routes to pay for other routes. Progress is going to be faster if it’s clean. But, at the end of the day, if there’s a better solution, we actually endeavour to recommend that better solution. It would be nice if that better solution was also transparent and we can confidently say that they’re not just better in the next 5 minutes but that they are going to be better for the next 5 hours when you can put in your transfer. It’s only fair to the consumers — they’re not stupid — that they should go wherever is cheapest, if they need that, or somewhere that is more convenient”.

Cue Monzo’s Blomfield to caution me not to get too caught up in the London fintech echo chamber. “Most people in the U.K. have never heard of Monzo or Revolut or TransferWise,” he says, “and so our mission over the next five years is to take market share off all of the big banks, who I think are gouging their customers on things like foreign exchange. There’s so much open space in front of us because big banks just aren’t able to keep up”.