Bringing a user’s hands into VR has been a pretty logical move for ambitious companies in the space. The mouse and keyboard just don’t make sense, and while more conventional physical controllers make sense for games like first-person shooters, gloves bring a lot to use cases that require a bit more finesse. We’ve seen glimpses into some of the work that Oculus is doing on VR gloves, and hand-tracking tech has been pursued by quite a few other startups, as well.

Plexus is launching out of Y Combinator’s latest class of startups with ambitions to bring a low-cost solution that puts a flexible glove onto users’ hands that will deliver feedback for AR and VR without leaving them confused and their hands super sweaty.

The Plexus glove relies on the existing tracking systems of HTC and Oculus headsets, though they’re also working on their own more svelte solution based on licensed SteamVR tracking tech. Basically, the tracking sensors grab the position of where the hands are in space via the magnetically attached tracker and, after calibrating a resting state of the user’s fingers, individual sensors communicate their position to the game engine.

The silicone glove is a pretty effective design. Velcro straps secure the glove at your palm and the individual finger controls hook onto the end of your fingertips with motors that offer tactile feedback to users. 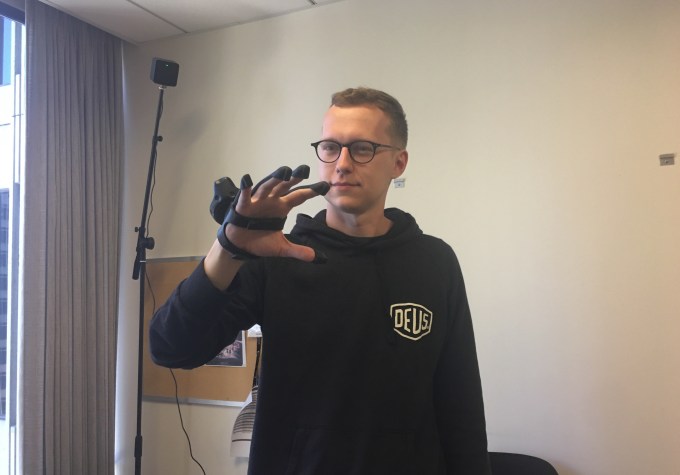 I had a chance at a demo and the design makes navigation pretty effortless with most of the weight placed on the back of the wrist. After strapping on a pair of gloves, I was able to hold virtual items in my cupped hands and manipulate the position of objects.

There is clearly still some work to be done on the software end in regards to motion latency. Plexus is shipping the gloves with toolkits for Unity and Unreal game engines. It’s clear, though, that a lot of the hardest work to tackle with gloves fall on the software design and the interaction engine that allow the physics of your real-world hand movements to do what you want in VR.

Plexus is first approaching users on the enterprise side. It’s understandably pretty difficult to gather traction on consumer platforms that are already complicated enough to figure out on their own. By shipping developer kits at just $249 per pair, the company has a shot at gathering early interest from devs with whom $1,000+ kits have failed.

The company is looking to ship its first pairs of gloves in August, though they’re taking reservations now on their site.