Facebook’s been criticized for tearing America apart, but now it will try to help us forge bonds with our neighbors to the south. Facebook Messenger will now offer optional auto-translation of English to Spanish and vice-versa for all users in the United States and Mexico. It’s a timely launch given the family separation troubles at the nation’s border.

The feature could facilitate cross-border and cross-language friendships, business and discussion that might show people in the two countries that deep down we’re all just human. It could be especially powerful for U.S. companies looking to use Messenger for conversational commerce without having to self-translate everything. 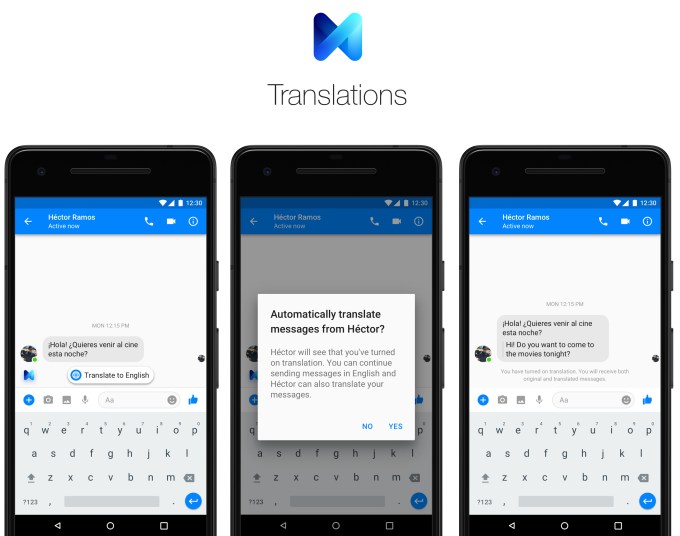 Facebook tells me “we were pleased with the results” following a test using AI to translate the language pair in Messenger for U.S. Facebook Marketplace users in April.

Now when users receive a message that is different from their default language, Messenger’s AI assistant M will ask if they want it translated. All future messages in that thread will be auto-translated unless a user turns it off. Facebook plans to bring the feature to more language pairs and countries soon.

A Facebook spokesperson tells me, “The goal with this launch is really to enable people to communicate with people they wouldn’t have been able to otherwise, in a way that is natural and seamless.”

Conversational translation is a lot tougher than social media posts, though. When we chat with friends, it’s more colloquial and full of slang. We’re also usually typing in more of a hurry and can be less accurate. But if Facebook can reliably figure out what we’re saying, Messenger could become the modern-day Babel Fish. At 2016’s F8, Facebook CEO Mark Zuckerberg threw shade on Donald Trump saying, “instead of building walls, we can build bridges.” Trump still doesn’t have that wall, and now Zuck is building a bridge with technology.