A group of legislators in California have sneakily but comprehensively “eviscerated” the state’s imminent net neutrality bill, removing a huge amount of protections in a set of last-minute amendments. State Senator Scott Wiener called the hostile rework of the bill “outrageous.”

California’s net neutrality bill has been cited as an excellent example of what states can do to protect their citizens now that the 2015 rules have been officially rolled back and weaker ones substituted. And in some ways it actually went further than the FCC’s popular rules, which were a bit more conservative on, for example, the practice of zero rating.

While the FCC found that zero rating practices could basically be pursued up to a certain point, the California bill would essentially render illegal the ones that exist today.

The California rules (SB 822) would allow zero rating to happen, but prohibit the part where an ISP could prioritize certain apps or businesses over others. So they could allow all music, or medical data, or indeed video advertising traffic to be free to consumers — but not just Spotify, or just this insurance provider, etc. Consumers get the benefits and are protected from most of the quiet but substantial ill effects.

But late last night the chair of the committee through which the bill must pass, Miguel Santiago, proposed some “suggested amendments” that completely removed the zero rating rules and several other important protections.

Now, disagreements on proposed laws are perfectly ordinary and that’s what committees like this are for, to balance different viewpoints and ostensibly produce a better law. And Sen. Wiener has indicated that he and the others behind the bill are willing to negotiate.

“We attempted to work with the committee and made clear we were willing to make amendments, but we also made clear what our bottom lines were, and what we couldn’t remove from the bill,” he told me. “The way the committee went about doing this is pretty outrageous.”

Normally the amendments would be proposed and the author of the bill would work with them on how to integrate them — if they can’t reach an agreement, the bill doesn’t pass the committee. But in this case the committee literally proposed the changes late last night and forcibly injected them first thing this morning. 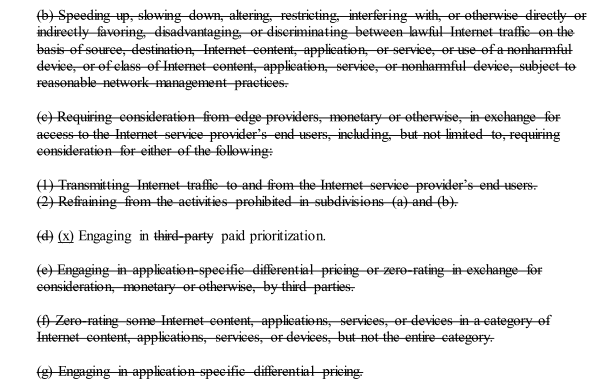 To be clear, the amendments aren’t minor changes: pages of rules and definitions are entirely removed or reduced to far simpler versions.

Naturally these are issues that broadband and mobile providers are very concerned about. Since many already zero-rate lots of services, they would have to bring their offerings into line with the law, the process of which would probably remove any competitive benefit they derive from them.

Why couldn’t these decisions wait until the bill is formally heard and public opinion formally sought? The bill as it was written had received plenty of support, but substantive changes could still be made in the months before it is voted on.

Wiener was frustrated but not defeatist. “We’re all professionals,” he said. “These are my colleagues. I’m sure we’ll have lots of discussions over the next few weeks, or even the next few months.”

That said, it’s clear from this ambush on the bill that there are powerful forces at work opposing it. What happens next is anybody’s guess, but we’ll know more in the coming weeks as more hearings and committees consider the now deeply compromised law.