GOAT, the secondary marketplace for sneakers that recently merged with Flight Club, is announcing a new hire. Lizzie Francis will join the company as Chief Operating Officer, coming from Brilliant Ventures where she will remain a managing partner.

Francis formerly acted as CMO at Gilt Group and CMO at JustFab.com. She’s been running Brilliant for a couple of years after founding it with Kara Weber. She also serves on the board of Shoes of Prey, a custom shoe company currently aimed at the women’s market. Now she’s taking an ops position at one of the biggest players in the sneaker market.

Along with StockX, GOAT has brought a huge amount of access and pricing transparency to resale sneakers, a billion-plus market. GOAT currently has over 8 million members, 400 employees, 100,000 combined sellers and 400,000 sneaker listings. After merging with the powerhouse retailer, it now has the two Flight Club retail stores in Los Angeles and New York.

GOAT CEO Eddy Lu says Francis had the cross-section of experience they needed in the days ahead.

“As we see the future of GOAT…we’re going international, we want to focus on more on women, we want to do a bunch of stuff, including innovation on the technology side, we wanted to bring in a great senior leader that has seen a lot of this stuff especially as we’ve done the Flight Club merger. We’re looking into more retail as well so we wanted someone that had great e-commerce experience but also understood retail that could really help us think through how to create model stores how to expand physical retail, and omni channel retail, in general. So, yeah, we talked to a bunch of people and Lizzie was the one who just kind of all of us just really gravitated towards.”

As a sneaker marketplace, GOAT already has an incredible opportunity to flip the script on the traditional attitude of that culture towards women shoppers. Sneakerheads who also happen to be women have been massively underserved to this point. GOAT’s female user base is growing at twice the rate of its male users. 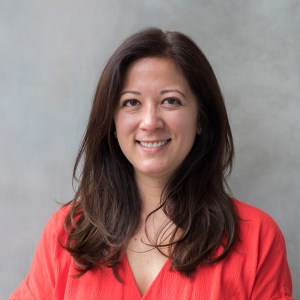 “There are so many things that are going so well here [at GOAT],” Francis says, “but in terms of immediate opportunity, obviously expanding into women is important for the company, and we’re seeing some really favorable tailwinds and data points that indicate that it’s a great time for us to be doing that. And also, our current customer bases, primarily male said, I’m sure you know, 85% of consumer spending is controlled by women. So it feels like now that we have a great platform in place it’s actually a great time for us to focus on that female customer that’s both a buyer and a seller.”

This year, GOAT will introduce sizing conversion tools for women on the platform, allowing them to easily figure out what men’s size will fit them. This is important because a huge amount of sneaker styles that are made for men are not produced for women, so both parties are shopping the same styles and pools of stock. They’ll also introduce more women’s styles to the mix.

GOAT and Flight Club as a combined entity has some interesting roads ahead of it figuring out the role of traditional retail in supporting and augmenting online sales. Lu says that both pop-up and traditional retail are in the plans.

“We’re open to whatever the customer tells us they want to need. Right now, the Flight Club stores have some of the highest sales per square foot comps in the country. People come to Flight Club because they’re cultural institutions and so we definitely see a need and an opportunity to create more kind of brick and mortar, long term lease store and keep market.”

Francis says that the biggest opportunity that she sees with the brand currently is to lean into storytelling. Between the launch of a shoe directly with Versace and Greatest, GOAT’s new periodical, there’s a chance to enhance the story side of the company – and storytelling does sell shoes, just ask Jordan Brand.

“I see that there’s still so much more opportunity for us to amplify storytelling across the platforms and in store in a way that really connects the consumer with the product,” says Francis. “Because whenever we buy product, when we buy style, it’s a reflection of who we are, and it says a little bit about us before the [other] person even knows who we are. I mean, I bet a fun trick would be what we are all wearing today, what shoes do we have on now? What’s our Monday morning shoe? what’s our Monday night shoe? They are telling the world ‘this is who I am.’ And so I think the thing I can help on right away is how we continue to amplify the storytelling that we’re doing and do it in a way where the consumer feels that we don’t leave any of the great frictionless experience of the technology that’s already there —but just make it addictive in a way that’s fun and exciting for both the consumer and the seller.”