Tel Aviv-based Photomyne, an A.I.-powered app that helps you bring your old photo prints online, has been benefitting from the subscription app boom to the tune of $5 million in Series A funding. Today, the app is used by a million people every month, and 250,000 people pay the $20 annual subscription for the expanded service. This adds a handful of additional features, including the option to build a family website where all your photos are uploaded immediately after being scanned.

There is something of a limited lifetime for apps that convert physical media to digital – at some point, everyone who wants to transition their old media to the web will have done so. Another issue is that some people will make scanning photos a one-time project. They’ll then save all their photos to their own device and cloud storage, and cancel their subscription.

And as those users drop off, physical media will continue to die out.

For those reasons, Photomyne will eventually need to expand into other areas – perhaps scanning other things beyond photos. As it has a couple of patents for things like scanning business cards, documents, and sticky notes, it’s clearly thinking about this, too.

But in the meantime, there’s still an audience of self-appointed family historians, who are making old photos available to their extended families, as well as older folks who grew up in the pre-smartphone era and now want to bring their memories online, too.

By leveraging A.I. technology which runs locally, in real-time, on mobile devices, Photomyne is able to speed up the fairly tedious process of photo scanning using a handheld device. That is, instead of having to focus on one photo – as with Google’s PhotoScan, for example – Photomyne lets you scan multiple photos in a single shot as you flip through the pages of old albums.

It then breaks those up into individual photos by auto-detecting the boundaries.

It also auto-rotates sideways photos, crops the photos, corrects the photo perspective, and saves them in a digital album where you can further filter them, share, or – with the subscription – save locally, backup to the cloud, sync to other devices, or publish to a family website. 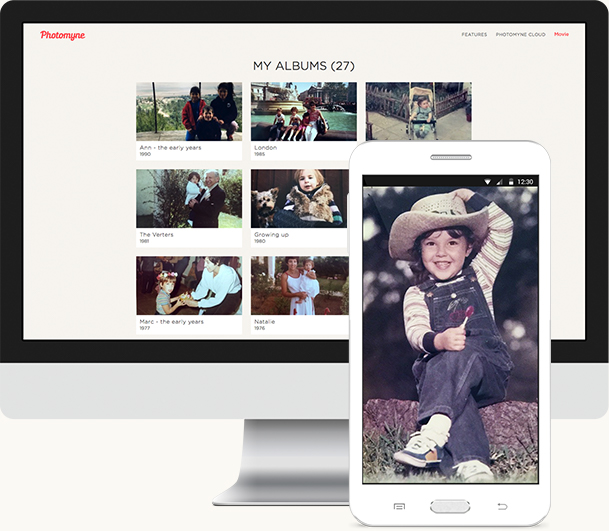 The ability to scan more photos in one shot makes the app appealing to those who want to upload their entire collection of old photos to the web, instead of picking and choosing specific photos to import.

In addition, the app’s A.I.-based technology improves over time the more you use it, says Photomyne’s co-founder and CFO Yair Segalovitz.

And soon, the company plans to roll out other advanced features, too, he notes.

“We are focused on a new set of exciting features that we expect to release in the very near future. We intend to offer automatic color correction – such as fixing color decay – and the ability to search interesting photos in our 70 million-plus photo archive,” says Segalovitz.

To date, Photomyne has been downloaded 7 million times and is largely used in the U.S. and in Western Europe, though it’s starting to see growth in China, too.

The Series A round was led by Luxembourg-based Maor, a co-investment tech fund from Philippe Guez and Eric Elalouf. It also included participation from Israeli investors and others from its seed round a couple of years ago.

With the new funding, the company plans to expand its team of 16 to around 25 and scale the business in Japan and South East Asia, in particular.

Photomyne is a free download on iOS and Android, but the full range of feature is only available to subscribers.