Despite some concerns over its adoption by scammers, new payment service Zelle is shaping up to overtake rival Venmo this year, according to a new forecast from eMarketer. The firm expects Zelle to grow more than 73 percent in 2018, to reach 27.4 million users in the U.S., ahead of Venmo’s 22.9 million. Square Cash will trail with 9.5 million users.

This growth isn’t necessarily chalked up to user preference, but rather, ubiquity. 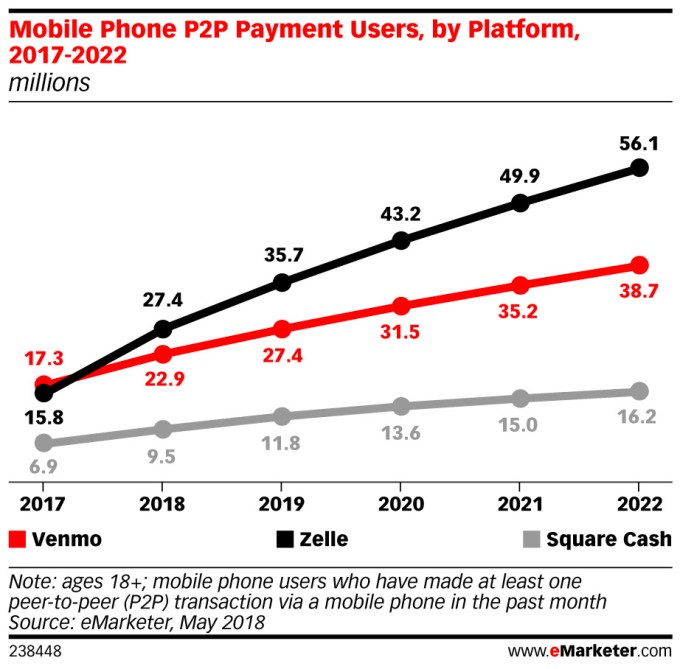 Zelle is backed by a network of over 30 U.S. banks, as their means of winning over users from other payment apps including Venmo, PayPal, and Square Cash. The banks had wanted to develop their own alternative these apps for several years, but only recently had those efforts gained momentum. The Zelle website now claims participation from over 100 financial institutions, as well as processor partners CO-OP Financial Services, FIS, Fiserv and Jack Henry, and network partners VISA and MasterCard.

The participating banks are now integrating Zelle into their own websites and mobile apps – meaning, users are finding Zelle as they use their existing banking applications. They’re not seeking it out directly, in many cases.

“One of the main hurdles new apps face is building trust and a sizable audience,” explained eMarketer forecasting analyst Cindy Liu. “But Zelle has leapfrogged the early stages of adoption by having the benefit of being embedded into the already existing apps of participating banks,” she said.

Earlier this year, Zelle said it was signing up users at a rate of 100,000 consumers per day, and claimed it had processed 247 million payments totaling $75 billion in 2017. That’s a sizable chunk of the peer-to-peer payments market. 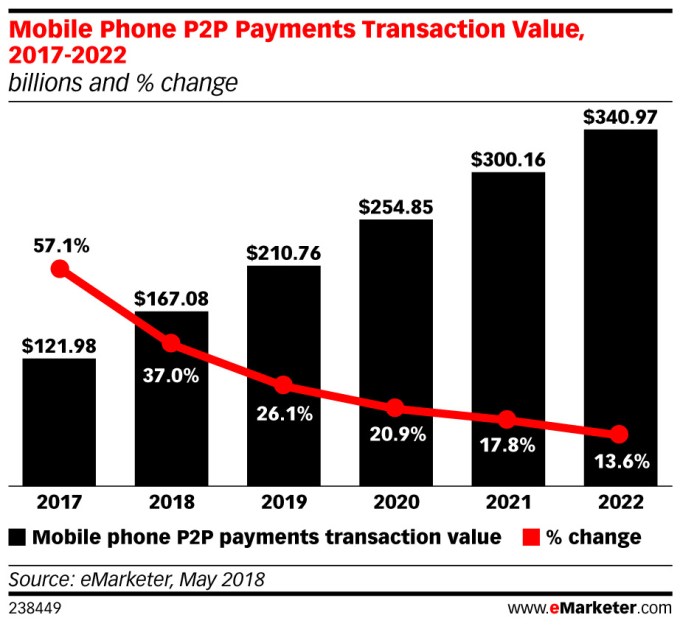 Emarketer’s forecast estimates the total number of U.S. p2p mobile payment users will grow 30 percent in 2018 to reach 82.5 million people, or 40.5 percent of U.S. smartphone users. It also expects the total transaction volume of p2p mobile payments to grow 37 percent this year to reach $167.08 billion. By 2021, that figure will reach over $300 billion.

That leaves room for all services to carve out their piece of the market, even if Zelle ends up in the lead.