One of the most popular movies in the U.S. is a terrible teen rom-com called “The Kissing Booth,” and it’s not in theaters. Instead, this Netflix Original with its paltry 17 percent critics’ score on Rotten Tomatoes, shot up to become the No. 4 movie on IMDb, before more recently dropping down to No. 9. Its leads, Jacob Elordi and Joey King, also became the No. 1 and No. 6 most popular stars on IMDb’s StarMeter, respectively, shortly after the film’s launch.

The secret to the movie’s success, however, is not just a combination of teenagers’ questionable taste in entertainment and the power of Netflix’s distribution — though both play a major role, clearly.

Instead, it’s that “The Kissing Booth” is tapping into a built-in audience: teenage Wattpad users.

In case you’re not familiar, Wattpad is an online site and mobile app where writers can share their original stories — often things like fan fiction or sappy love stories (ahem) — with a wide community of readers. Today, Wattpad is visited by more than 65 million monthly users, who spend a collective 15 billion minutes per month reading its online stories.

“The Kissing Booth” was one of its successes.

The original story was started on Wattpad back in 2011, and won one of the site’s “Watty Awards” that same year for “Most Popular Teen Fiction.”

The story was read a whopping 19 million times while on Wattpad, before the then 17-year-old author Beth Reekles scored a three-book deal with Random House UK in 2013 — becoming the youngest Wattpad writer to earn a book deal at that time, the company notes.

London- and L.A.-based Komixx Media — the movie’s producer, which specializes in finding young adult IP with commercial potential — reached out to the author within months of the book deal.

And Netflix ordered its adaptation of “The Kissing Booth” in 2016.

“The Kissing Booth is a great example of what is possible on Wattpad,” said Aron Levitz, head of Wattpad Studios, the online community’s studio arm that helps make deals for its authors.

“Beth was a fresh new voice whose story connected with millions of readers all over the world on Wattpad, before becoming a published book,” he noted. “We were able to work with Netflix to market the film on Wattpad and make sure the story’s fans around the world hit ‘play’ when it started streaming. And now it’s one of the most popular movies on the planet.”

Wattpad and Netflix teamed up on a writing contest that asked people to submit their stories of high school love. A number of ads for “The Kissing Booth” also ran on Wattpad, driving viewers to the film’s page on Netflix.

Netflix Chief Content Officer Ted Sarandos confirmed to Vulture the title is one of the streaming service’s most popular, saying that “The Kissing Booth” is “one of the most-watched movies in the country, and maybe the world.”

He didn’t cite hard numbers — Netflix doesn’t do that — but the IMDb rankings indicate the movie is at least resonating with its core teen audience.

Since the movie launched on Netflix, the published book has also shot up the charts. It’s ranking in the top 10 of three “Teen” categories on Amazon, as of the time of writing, including No. 10 in the “Contemporary Teen Romance” category.

Of course, going from an online story to one of the most popular releases in the country is not unique to Wattpad. “50 Shades of Grey” famously began online as “Twilight” fan fiction, for example. But Wattpad has a different audience for its romantic fare than the more adult “50 Shades.” And studios, both traditional and digital, are taking notice.

Most recently, Sony Pictures Television acquired the rights to Wattpad story “Death is my BFF,” which was read more than 92 million times, and Hulu gave a straight-to-series order to “Light as a Feather,” which saw more than 2.9 million Wattpad reads. “Cupid’s Match,” which had over 36 million reads, got a pilot on CW Seed.

Wattpad has also worked with Turner, Universal Cable Productions (a division of NBCUniversal), eOne and Paramount Pictures, among others. 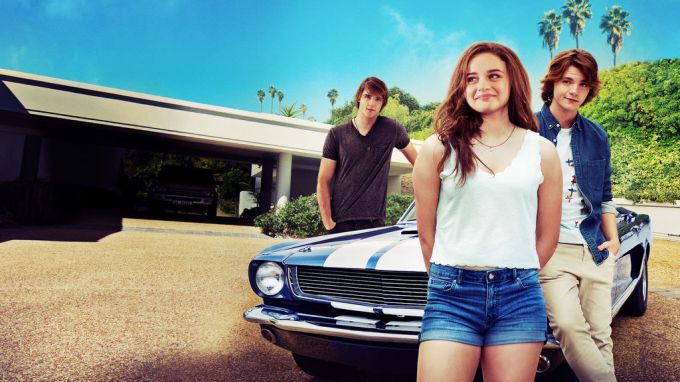 Critical reviews of “The Kissing Booth,” are, as you may expect, fairly negative.

It’s panned as “lazy and amateur,” “clumsy and ham-handed” and just simply “not a good movie.”

But critical interest in films and what people actually watch are often disconnected. That’s certainly the case here as “The Kissing Booth” has an audience score of 71 percent on Rotten Tomatoes. That’s better than the top theatrical release, “Ocean’s 8,” which has a 52 percent score; or the even the No. 2 movie, “Solo: A Star Wars Story,” which is at 65 percent.

“The Kissing Booth” may not be a “good” film, but that hardly seems to matter at this point.

It’s popular among a largely younger crowd — a key target for streaming services. These kids and young adults have grown up watching TV and movies on mobile and computer screens, and often stay home from theaters. And they’re reading their fiction on the web and in mobile apps, too.

Netflix has catered to this young audience before, with arguably “bad” but popular original films like “Bright” (26 percent critics versus 85 percent audience score on Rotten Tomatoes); or the “so bad it’s good” holiday film “A Christmas Prince.”

With Netflix’s now 125 million subscribers and its $1.5 billion in new debt financing, the service has the potential to tap into any key demographic like this time and time again, and serve up a hit — terrible as it may be. And that hit can reach a mass audience, bigger than cable TV or even the Hollywood productions in theaters, in some cases. Hopefully, at least some of them will be “good” by all measures, though, not just viewership.