eyeo, the company behind the popular browser-based ad block product Adblock Plus, is no stranger to controversy. Which is just as well given its new “passion project”: A browser add-on that labels news content as ‘trusted’ or, well, Breitbart.

And thus to help people avoid falling for scams or down into political sinkholes — at least without being aware of their inherent bias.

The system, which is currently only available for English language content, “democratically scores the integrity and trustworthiness of online news sources”, as eyeo puts it.

After being added to Chrome, the browser extension displays a small green check mark against its icon if a news source is deemed to be trustworthy.

Or you might see an orange colored ‘B’ — denoting ‘bias’ — as in the below example, for the ‘alt right’ news website Breitbart… 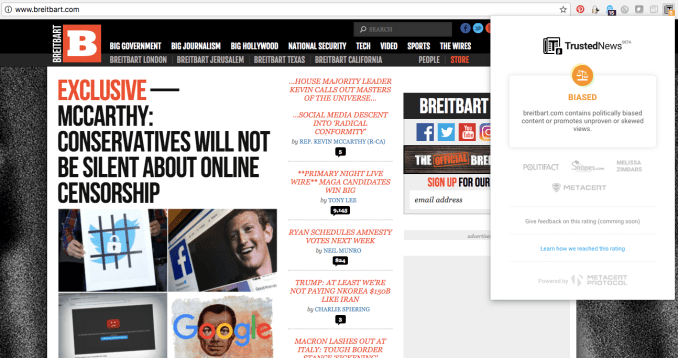 The extension can also deploy flags for untrustworthy, satire (denoted with a little blue smilie), clickbait, user-generated content, malicious or unknown — the latter if the site hasn’t yet been classified.

It’s not clear how many sites have been classified via the system at this stage.

“For now the way that it works is that you have these sources… and what they will do is essentially give their rating on a particular site and then, basically, if everything isn’t all the same — which they usually are — then you would just go by the [majority],” explains Ben Williams, the company’s director of ecosystems.

But the plan is to evolve this approach using user feedback and — you guessed it — blockchain technology.

eyeo has been working with MetaCert Protocol which runs an anti-fraud URL registry (that’s also headed for the blockchain), to maintain the database for the project.

And that database will be decentralized by moving it to the Ethereum blockchain — with a new protocol and built-in game mechanics to reward submissions. MetaCert tokens will also be issued to track rewards and mitigate the risk of bad actors spoiling the quality of the data.

“What we want to do, and where the blockchain comes in, is we want to move that over to incorporate users’ feedback as well,” says Williams. “So initially what we’re going to do in a few weeks is incorporate something where users can just provide feedback through the extension. And they can dispute something. They can say ‘hey I don’t feel like this site should be listed as biased because whatever’. And we’re going to use that feedback to make the product better.

“And then the next step is to decouple that from any server, and from any third party, and give it directly to the blockchain. So that that feedback can live on its own in that place and so that good feedback can be prized and rewarded among users, and people who are providing bad feedback won’t be. So that is the next step.”

Another future step would be to add more “fine-grained detail” — such as being able to say which way on the political spectrum a biased news source swings, for example.

And also easier ways for people to comment on such ratings. But that’s also yet to come.

Indeed, Williams emphasizes that eyeo is testing the waters at this stage — to see whether the approach will be something web users find useful.

To be clear, it’s also not intending to monetize the extension in any shape or form. (And, for the record, Williams confirms there will be no ‘whitelist’ for bypassing ratings, even before blockchain tech gets involved and decentralizes the project.)

“I want to stress, this is a first, humble attempt — this is a beta — we want to see how this goes. We want people to give us honest feedback on it. And we want to improve upon that. So it’s not merely a matter of where the labels are. But also is this what people want?” he says. “We think it’s a good idea but it is, again, just a start.”

Facebook has its own fake news fighting efforts now, of course, but clearly those only apply to content within its walled garden. If you want to fight fakes on the Internet as a whole the browser is the best place to do it, reckons Williams.

“There is a different between the entire Internet and Facebook. Facebook is a way to access certain things on the web and I appreciate the fact that in certain places it’s the only way, unfortunately, that people can reach the web but the web is a very vast place,” he says.

“Most people reach it through the web browsers, so being in that web browser allows users to have that sort of protection and understanding wherever they go on the web. Facebook included.”

On the privacy front, eyeo says that the Trusted News extension updates its own internal database each day so that users’ browsing activity “never touches a central server”.

Support for other browsers is planned, assuming the extension finds fans. It looks pretty safe to assume it’s not going to be popular with certain sections on the far right of the political spectrum.

Though, while Breitbart and the Daily Mail are labeled ‘biased’, Fox News and The Sun, for example, do get a trustworthy tick. Also ‘trusted’ by Trusted News’ current rating system: President Donald Trump’s favorite media target for labeling as ‘fake news’, CNN; and RT (formerly known as Russia Today), one of the Russian state-backed media organizations Twitter banned from its ad platform last year for attempting to interfere in the 2016 US elections…

“In weeks to months or so we should definitely be able to move everything over to the blockchain so it’s all not too far away. I think that the bigger question down the line for us — not months, but maybe a year or so — is if there is demand. If people like it. Again. If people are happy with the beta product then how do we or should we move to mobile? That would be the next really big question,” adds Williams.