TheSkimm, the female-led media company best known for its newsletter that summarizes, in plain language, the top news and highlights from the day before, is today launching a mobile app for Android devices. Previously available on the iPhone, theSkimm’s new app combines a mobile version of its newsletter, along with a calendar of important events, immediate updates on events happening now, weekly audio episodes focused on complex topics, and a new feature called “Text theSkimm.”

As you may have guessed by the name, Text theSkimm allows mobile app subscribers to text the company directly to receive information about important decisions they’re making, like those about investing, asking for a raise, or their healthcare options.

On this front, theSkimm competes with other self improvement-via-text services, including Shine, another female-founded startup which recently raised $5 million for its own suite of apps and services.

TheSkimm, meanwhile, is backed by $29 million in outside capital. 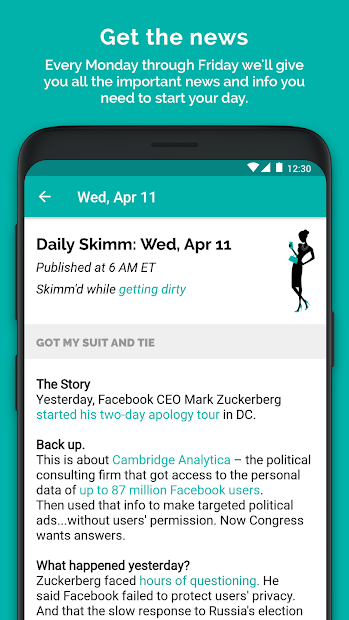 Founded by former TV news producers, Carly Zakin and Danielle Weisberg, what makes theSkimm compelling is the conversational tone it uses to discuss the key news events and provide the richer background on more complex topics. That makes it easier for people to understand what’s really going on in the world, and why it matters – even when they’re not good about turning on the TV news every day. (And really, can you blame ’em?)

The tone of the newsletter is not exactly full-on snark, but instead aims to be more humorous, as appropriate.

For example, today’s theSkimm was titled “One does not simply walk into Mordor,” with the lead story being, of course, President Trump’s meeting with North Korean leader Kim Jong Un.

But it doesn’t joke its way through the explanations, which are concise summaries written using clear language and a shorter sentence structure. It’s very readable.

While theSkimm’s core product is its email newsletter – which is how the company got its start – it has later expanded to native apps and even audio programming. 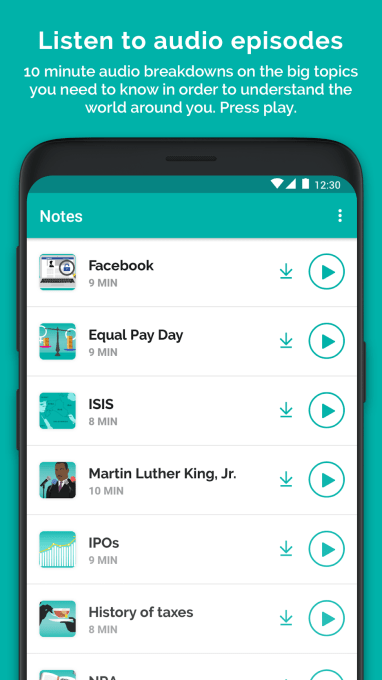 The mobile app provides a home to the newsletter content, as well as theSkimm’s other news and information services.

Of particular use, is theSkimm’s Calendar which syncs up with your phone’s calendar so you won’t miss important events – like voting day or the start of the World Cup, for example. 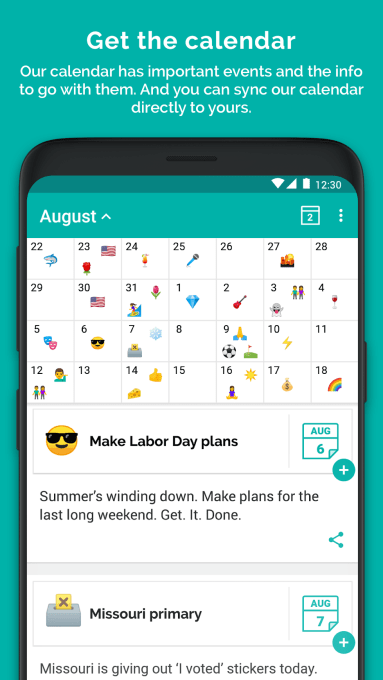 However, unlike the newsletter, theSkimm’s app is not free. While you can try it out via a free preview, the full service is available as a $2.99 per month subscription, or $29.99 if you pay annually.

This isn’t the only source theSkimm’s revenue – other sources include native ads, affiliate, content licensing and distribution. However, subscriptions are proving to be a big revenue driver for mobile apps, as more consumers grow comfortable with the model popularized by streaming services, like Netflix.

In May, theSkimm closed on its $12 million Series C with the addition of notable, mostly female, investors joining, including Shonda Rhimes and Tyra Banks. At the time, the company had a reported seven million subscribers.

80 percent of its audience is female, and over half are millennials, theSkimm today says. Its highly engaged “Skimm’bassador” community has over 30,000 members, and 2 million follow theSkimm on social media.

While iOS is the preferred mobile platform among its user base, theSkimm says that 25 percent of its users are on Android. And that audience is growing – it doubled over the past 3 years, in fact.

That’s why the company needed to launch a native Android app.

The app quietly launched on June 11, ahead of today’s official announcement, but already has over 5,000 downloads on Google Play. The download is free with the option to preview the service before paying.