Every once in a while, you meet an entrepreneur who is both fully present, but also has a head full of dreams. That was my experience meeting and hosting Alex Zhavoronkov, the founder and CEO of Insilico Medicine, a few weeks ago in Vienna at the Pioneers conference. There, he gave a presentation on how he is going to defeat aging using a set of deep learning AI tools, and also told me that I am going to live forever because I am young enough to benefit from the tech he is developing.

I am a huge skeptic to be frank (particularly anytime deep learning gets bandied about), but after chatting with him both before and after getting on stage, I can’t preclude the possibility that aging is something that might be within humanity’s (or at least Zhavoronkov’s) grasp to control.

That belief in the company’s mission is reflected in a set of twin announcements today. The company announced that it has received a strategic round of financing led by WuXi AppTec, a Chinese integrated R&D services platform, along with Peter Diamandis’ BOLD Capital and Pavilion Capital, a subsidiary of Singapore-based Temasek. In addition, the company announced a strategic partnership with WuXi, in which Insilico’s inventions will be tested by WuXi. The terms of the round were not disclosed, but Insilico has raised $14 million previously from investors according to Crunchbase. 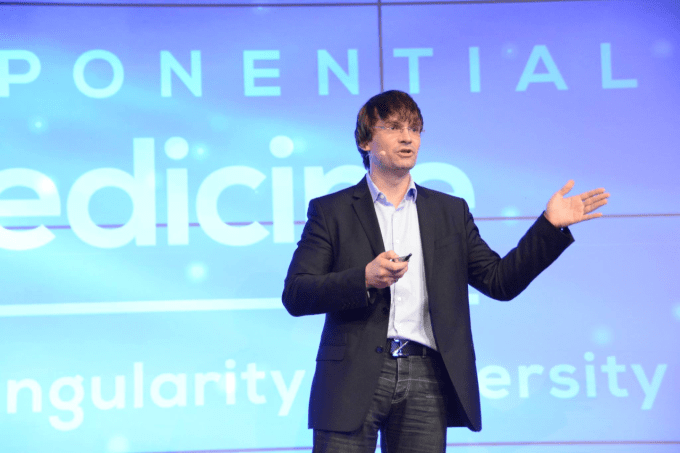 In order to understand the company’s technology, we need to understand a bit more about how therapeutics are developed. In the classical model used by pharmaceutical companies, scientists in an R&D lab investigate naturally occurring molecules while searching for potential therapeutic properties. When they find a molecule that could be a candidate, they begin a series of tests to determine the treatment efficacy of the molecules (and also to receive FDA approval).

Rather than going forward through the process, Insilico works backwards. The company starts with an end objective — say stopping aging — and then uses a toolbox of deep learning algorithms to devise ideal molecules de novo. Those molecules may not exist anywhere in the world, but can be “manufactured” in the lab.

The key underlying technique for the company is what are known as GANs, or generative adversarial networks with reinforcement learning. At a high-level, GANs include a neural net “generator” that creates new products (in this case, molecules), and a discriminator that classifies the new product. Those neural nets then adapt over time in order to compete against each other more effectively.

GANs have been used to create fake photos that look almost photorealistic, but that no camera has ever taken. Zhavoronkov suggested to me that clinical patient data may one day be manufactured — providing far more data while protecting patient privacy.

While Zhavoronkov has bold dreams about conquering aging, today the company is focused more broadly on creating an inventory of new molecules that could provide new therapeutics, albeit particularly focused on longevity (here is the company’s research paper on PubMed). Under the company’s new strategic partnership, WuXi will then take those new molecules and test them for efficacy in actual clinical settings.

As the company develops its technology, Zhavoronkov wants to offer a “longevity-as-a-service” engine that could power global longevity research using deep learning. That means providing a platform for researchers to find new molecules, identify which ones might be most promising as therapeutics, and then set them up for clinical trials to be used in actual clinical practice.

While Zhavoronkov is CEO, he is first a researcher. He has published extensively on his and his team’s discoveries while also leading a lab of 52 researchers. The hope is that the basic research that the team is producing can be commercially translated into industry, and ultimately, purchased by the largest pharmaceutical giants in the world.

It may be early days, but Zhavoronkov is deeply ambitious about Insilico’s potential to halt aging. Even if those dreams are difficult to accomplish, the technology built along the way could radically change our drug pipeline, and that will provide relief for all kinds of diseases.