Well, Square Enix just wrapped up a short and uneventful E3 press conference that really seemed to phone it in. No Final Fantasy VII remake details and nothing on The Avengers or Guardians of the Galaxy.

The hyped presentation did have plenty to share on a new Tomb Raider title, to which they devoted about seven minutes of their half-hour presser. They also spent a lot of time with close-ups of the tornadoes that will be blaring around in Just Cause 4, which is getting a December release date. The extreme weather looks pretty cool, actually, and, given that a lot of the Just Cause series seems to be about just finding the limits of weird stuff you can do with the game’s wonky physics, this seems like it’d be pretty clutch.

Outside of that, there was a sneak peek at a new title called The Quiet Man, which at first glance seems to be a title devoted to a deaf man punching Hispanic dudes in alleys throughout New York. Babylon’s Fall is also new. Additionally we saw the Kingdom Hearts III trailer we saw at the Microsoft event yesterday, along with a deeper look into Captain Spirit, which looks cute, but I find it difficult to get super excited about.

(Skip ahead like eight minutes into the stream recording to get to the trailers.)

Gamers had lofty hopes, but they were all dashed against the stone by the presser’s end as evidenced by this quick live YouTube comments screenshot. Nobody was forcing them to host a press conference, but when you hold one, people naturally have expectations. 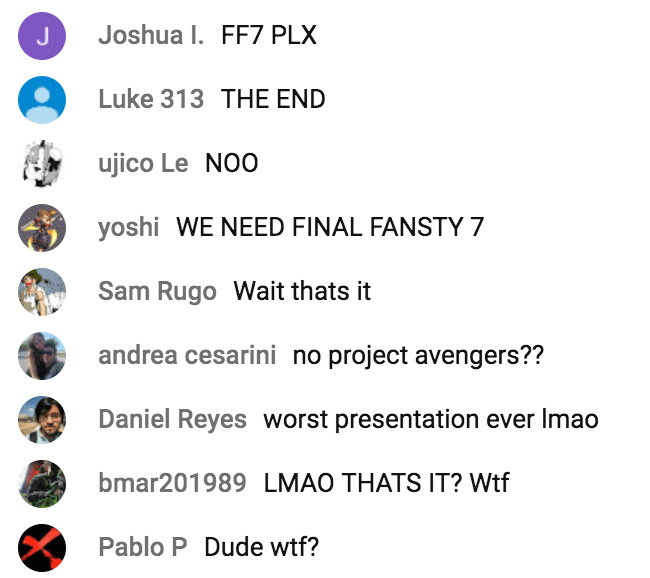