For many architects, the hardest part of their job starts after they finish designing a building, when the onerous process of code compliance begins. Written to ensure the safety and accessibility of buildings, codes dictate everything from the height and depth of stairs and where railings end, to the amount of floor space in front of toilets and the height of windows. Regulations are constantly updated, which means that even the most diligent team of architects often miss violations, resulting in costly delays. Y Combinator alum UpCodes wants to help them by using artificial intelligence, including natural language processing, to create what the San Francisco-based startup describes as “the spellcheck for buildings.”

Called UpCodes AI, the program is a plug-in that scans 3D models created with building information modeling (BIM) data and alerts architects about potential issues. It draws on the same backend as UpCodes’ first product, an app that compiles regulations into a constantly updated, searchable database with collaboration tools. UpCodes AI, which launched to the public last week, currently supports recent versions of Autodesk Revit and will add ARCHICAD, Sketchup and IFC in the future.

“This is like Grammarly for the construction industry. By highlighting code errors in real-time, the software acts as a code consultant working beside you at all times,” UpCodes co-founder and CEO Scott Reynolds tells TechCrunch. 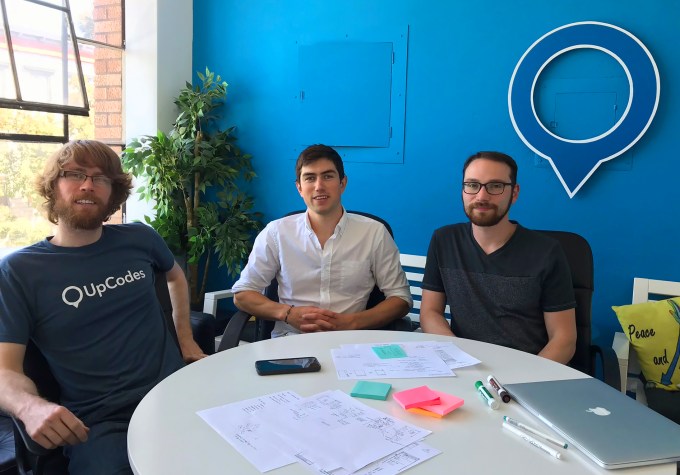 UpCodes was founded in 2016 after Reynolds became so frustrated by traditional code compliance while working as an architect that he switched career paths and launched the startup with his brother Garrett, a former software engineer at PlanGrid, to fix the process.

Building codes change so often that they are sometimes referred to as “living documents.” UpCodes’ database draws directly on regulations put online by municipalities and is updated almost in real-time. This eases a major pain point because many architects who thought they had followed regulations find out too late that they missed an amendment. In worst case scenarios, completed work needs to be torn out and rebuilt, potentially costing tens of thousands of dollars. This is a frequent occurrence and Scott Reynolds points to studies by McKinsey and the National Association of Home Builders that cite the complexity of code compliance as a major reason for reduced productivity in the construction industry and rising home prices.

Automating code compliance may also make it easier for architects to expand their practices, since regulations can vary dramatically between jurisdictions. UpCodes currently covers building codes in 26 states and the District of Columbia. Though UpCodes AI is still in its early stages, Reynolds tells TechCrunch that during its private beta it identified an average of about 27 violations per project.

One of its private beta users was Nicholas LoCicero, a designer with CallisonRTKL, an architecture firm known for retail design. LoCicero told TechCrunch in an email that the company used UpCodes AI on two retail locations that needed brand updates. Accessibility, which includes making sure that there are unobstructed ways of exiting a building from any point within it, is one of the most important parts of code compliance, and LoCicero said UpCodes AI was able to flag issues with door clearance, depth on stairs and tread width more quickly than the typical compliance process.

The program “definitely has the potential to save us hours of time with smart egress and accessibility tools and components that will help us develop projects faster during different phases of design” while ensuring that compliance is maintained, he added. 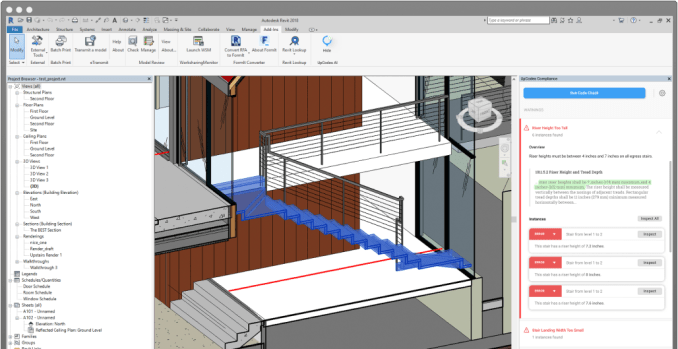 So far, UpCodes has raised $785,000 in funding from angel investors, as well as Y Combinator and Foundation Capital. It now has over 100,000 monthly active users and recently hired Mark Vulfson, former senior manager of engineering at PlanGrid, to serve as UpCodes AI’s technical lead.

Though the adoption of BIM data has made planning buildings more efficient, that’s “only a modest use of BIM’s full potential,” Reynolds says. He notes that it’s just within the past few years that more than 50% of American architecture firms have started using 3D information-rich modeling instead of 2D modeling. Programs like Revit and ARCHICAD, and new developments in APIs, finally made automated code compliance possible.

The use of AI in architecture is still new, but there are already several companies, including Autodesk and CoPlannery, exploring how to apply AI technologies to solve common problems in design, construction and engineering. Since AI is used in other major industries, including finance and healthcare, to automate compliance, it makes sense to assume that somewhere down the line, another company might try to build a competitor to UpCodes AI.

Reynolds believes that the UpCodes team’s combined industry and technical expertise will give it an edge over future rivals. He says his brother Garrett has a background in diffusion MRI analyzing large 4D data sets, while Vulfson brings “extensive experience deploying client side and web-based products” to the startup. UpCodes also works with a building code consultant who is based in New York City.

“The whole industry of code compliance has been neglected by software engineers for so long that it’s hard to imagine someone else doing what we’re doing,” Reynolds says.

“Building codes are a creativity killer.  These regulations are one of the most restrictive components of design,” he adds. “Imagine restricting every brush stroke an artist makes with ten thousand rules–that’s what building codes feel like to an architect. That’s why I quit my career to do this. I want to take away that frustration and make architecture more fun, like it is in school.”