With Microsoft’s $7.5 billion acquisition of GitHub this week, we can now decisively declare a trend: 2018 is shaping up as a darn good year for U.S. venture-backed M&A.

So far this year, acquirers have spent just over $20 billion in disclosed-price purchases of U.S. VC-funded companies, according to Crunchbase data. That’s about 80 percent of the 2017 full-year total, which is pretty impressive, considering we’re barely five months into 2018.

If one included unreported purchase prices, the totals would be quite a bit higher. Fewer than 20 percent of acquisitions in our data set came with reported prices.1 Undisclosed prices are mostly for smaller deals, but not always. We put together a list of a dozen undisclosed price M&A transactions this year involving companies snapped up by large-cap acquirers after raising more than $20 million in venture funding.

The deals that everyone talks about, however, are the ones with the big and disclosed price tags. And we’ve seen quite a few of those lately.

As we approach the half-year mark, nothing comes close to topping the GitHub deal, which ranks as one of the biggest acquisitions of a private, U.S. venture-backed company ever. The last deal to top it was Facebook’s $19 billion purchase of WhatsApp in 2014, according to Crunchbase.

Of course, GitHub is a unique story with an astounding growth trajectory. Its platform for code development, most popular among programmers, has drawn 28 million users. For context, that’s more than the entire population of Australia.

Still, let’s not forget about the other big deals announced in 2018. We list the top six below: 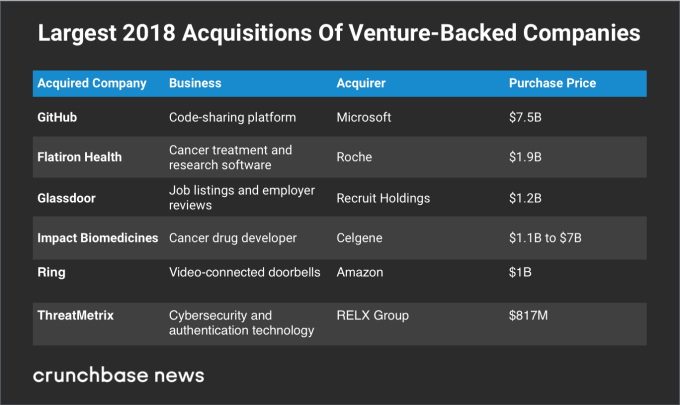 Flatiron Health, a provider of software used by cancer care providers and researchers, ranks as the second-biggest VC-backed acquisition of 2018. Its purchaser, Roche, was an existing stakeholder who apparently liked what it saw enough to buy up all remaining shares.

Next up is job and employer review site Glassdoor, a company familiar to many of those who’ve looked for a new post or handled hiring in the past decade. The 11-year-old company found a fan in Tokyo-based Recruit Holdings, a provider of recruitment and human resources services that also owns leading job site Indeed.com.

Not all metrics are trending up, however. While acquirers are doing bigger deals, they don’t appear to be buying a larger number of startups.

Crunchbase shows 216 startups in our data set that sold this year. That’s roughly on par with the pace of dealmaking in the year-ago period, which had 222 M&A exits using similar parameters. (For all of 2017, there were 508 startup acquisitions that met our parameters.2)

Below, we look at M&A counts for the past five calendar years: 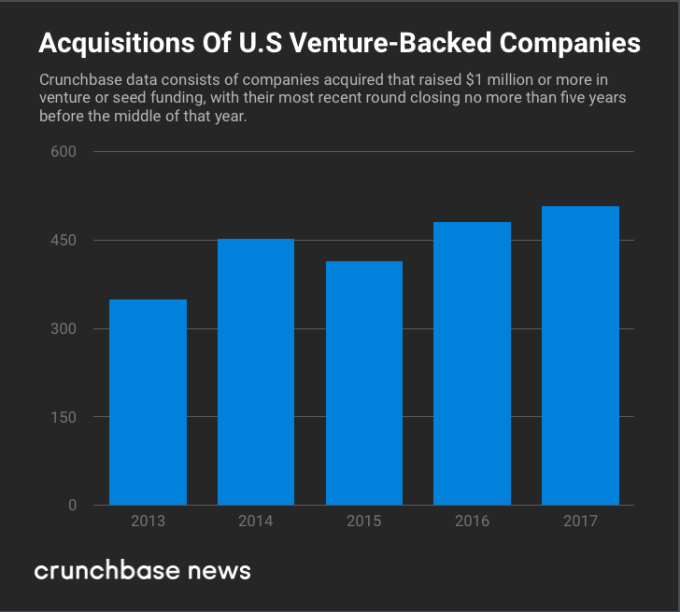 Looking at prior years for comparison, the takeaway seems to be that M&A deal counts for 2018 look just fine, but we’re not seeing a big spike.

The more notable shift from 2017 seems to be buyers’ bigger appetite for unicorn-scale deals. Last year, we saw just one acquisition of a software company for more than a billion dollars — Cisco’s $3.7 billion purchase of AppDynamics — and that was only after the performance management software provider filed to go public. The only other billion-plus deal was PetSmart’s $3.4 billion acquisition of pet food delivery service Chewy, which previously raised early venture funding and later private equity backing.

There are plenty of reasons why acquirers could be spending more freely this year. Some that come to mind: Stock indexes are chugging along, and U.S. legislators have slashed corporate tax rates. U.S. companies with large cash hordes held overseas, like Apple and Microsoft, also received new financial incentives to repatriate that money.

That’s not to say companies are doing acquisitions for these reasons. There’s no obligation to spend repatriated cash in any particular way. Many prefer share buybacks or sitting on piles of money. Nonetheless, the combination of these two things — more money and less uncertainty around tax reform — are certainly not a bad thing for M&A.

High public valuations, particularly for tech, also help. Microsoft shares, for instance, have risen by more than 44 percent in the past year. That means that it took about a third fewer shares to buy GitHub this month than it would have a year ago. (Of course, GitHub’s valuation probably rose as well, but we’ll ignore that for now.)

Overall, this is not looking like an M&A market for bargain hunters.

Large-cap acquirers seem willing to pay retail price for startups they like, given the competitive environment. After all, the IPO window is wide open. Plus, fast-growing unicorns have the option of staying private and raising money from SoftBank or a panoply of other highly capitalized investors.

Meanwhile, acquirers themselves are competing for desirable startups. Microsoft’s winning bid for GitHub reportedly followed overtures by Google, Atlassian and a host of other would-be buyers.

But even in the most buoyant climate, one rule of acquiring remains true: It’s hard to turn down $7.5 billion.