Electric scooters have become the hot new area for startups and “innovation.” For those who haven’t been keeping track, there are three main players in the Silicon Valley scooter wars: Bird, Lime and Spin. Bird first launched in Venice, Calif. before expanding into San Francisco in March. It’s worth pointing out that Bird, for now, is strictly an electric scooter company. That’s not the case for Lime and Spin, which both have their own bike-share services deployed throughout various parts of the country and world.

That same month — almost in complete lockstep — Lime and Spin deployed their own electric scooters in the city. Fast forward to June and the city of SF has placed a temporary hold on electric scooters until it can review permit applications. As part of a new city law, which went into effect June 4, scooter companies are not able to operate their services in SF without a permit.

Twelve companies (Uber/JUMP, Lyft, Skip, Spin, Lime, Scoot, ofo, Skip, Razor, CycleHop, USSCooter and Ridecell) have applied for permits in SF, but the city’s Municipal Transportation Agency will issue permits for no more than five companies during the 24-month pilot program. The program would grant up to 2,500 scooters to operate in total, but it’s not yet clear how many scooters each company would be allowed to deploy.

Uber and Lyft’s entrance into the electric scooter space was expected, given that Uber CEO Dara Khosrowshahi told me in April that he had his eyes on electric scooters, and Lyft had reportedly been in talks with the SFMTA about its permitting process. But it became more official this past week when both companies applied for permits to operate in SF. Uber and Lyft, which have both recently announced public transit integration, are clearly vying to become the one-stop shop for all transportation needs.

The SFMTA said it’s aiming to notify companies of their permit status by the end of June. If issued a permit, companies must then pay an annual permit fee of $25,000, as well as a $10,000 public property repair and maintenance endowment. Companies must also share trip data with the city.

But the scooter moratorium in SF has little effect on the state of scooters as a whole. The last week alone has been filled with multi-million-dollar investments in electric scooter companies like Bird and Lime. Bird authorized a new $200 million funding round that could value the company at around $1 billion post-money, and Bird competitor Lime is also reportedly raising $250 million.

Below, you can see where some of these newer players stack up in comparison to each other. This is just a look at companies that have deployed electric scooters in the United States.

Where the scooters at

California is the main hot spot for scooters in the U.S., but they have also popped up in Texas, Washington D.C., North Carolina and other states throughout the country. Unsurprisingly, regulation has proved to be an issue for many of these companies. In SF, the MTA is currently reviewing permit applications from electric scooter companies looking to operate in the city. The permit process came as a result of Bird, Lime and Spin deploying their electric scooters without permission in the city in March.

Over in Austin, dockless electric scooter startup GOAT says it’s working with the city to ensure its service meets the criteria laid out by regulators. Moving forward, GOAT says it’s actively working with other cities to pursue additional operating permits. In D.C., Skip, which is trying to differentiate itself by being more heavy-duty, worked with city officials and lawmakers to ensure it had the green light before launching.

Here’s an overview of where you can expect to see electric scooters throughout the country.

Outside of the U.S., Bird is looking at deploying scooters throughout Europe, the Middle East and Africa. In February, Bird brought on Patrick Studener, a former international growth product manager at Uber, to serve as head of EMEA at Bird, according to Studener’s LinkedIn. Earlier this week, TechCrunch also spotted a job posting for a general manager in Europe to lead market management.

Meanwhile, a source sent us a photo of a Lime on the streets of Zurich, Switzerland. It turns out Lime is working with the city around some pilot programs with private businesses.

Many companies aren’t actually building their own scooters. Instead, they’re slapping stickers and logos on scooters that have been around for years. Lime, Bird and Spin launched using scooters from Ninebot, a Chinese scooter company that has merged with Segway. Ninebot is backed by investors, including Sequoia Capital, Xiaomi and ShunWei. But Lime, Skip, Spin and Bird are looking to change that.

In May, Lime partnered with Segway to launch its next generation of electric scooters. These Segway-powered Lime scooters are designed to be safer, longer-lasting via battery power and more durable for what the sharing economy requires, Lime CEO Toby Sun told TechCrunch last month. Now, instead of a maximum distance of 23 miles or so, Lime scooters can go up to 35 miles.

“A lot of the features in the past on scooters were made for the consumer market,” Sun said. “Not for the shared, heavy-duty markets.” 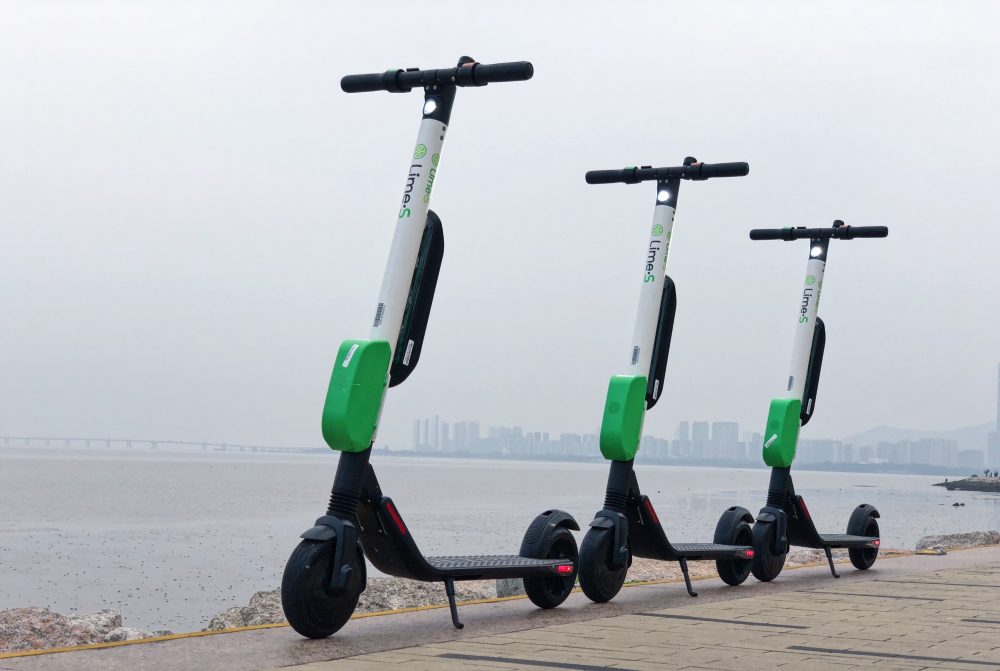 Bird is also experimenting with some new scooter models, but they seem to have modified versions of a Segway ES2. When reached for comment, Bird said it didn’t have many details to provide. Meanwhile, Skip does have plans to build its own custom scooters but currently modifies the Speedway Mini4 63V 21Ah scooters. 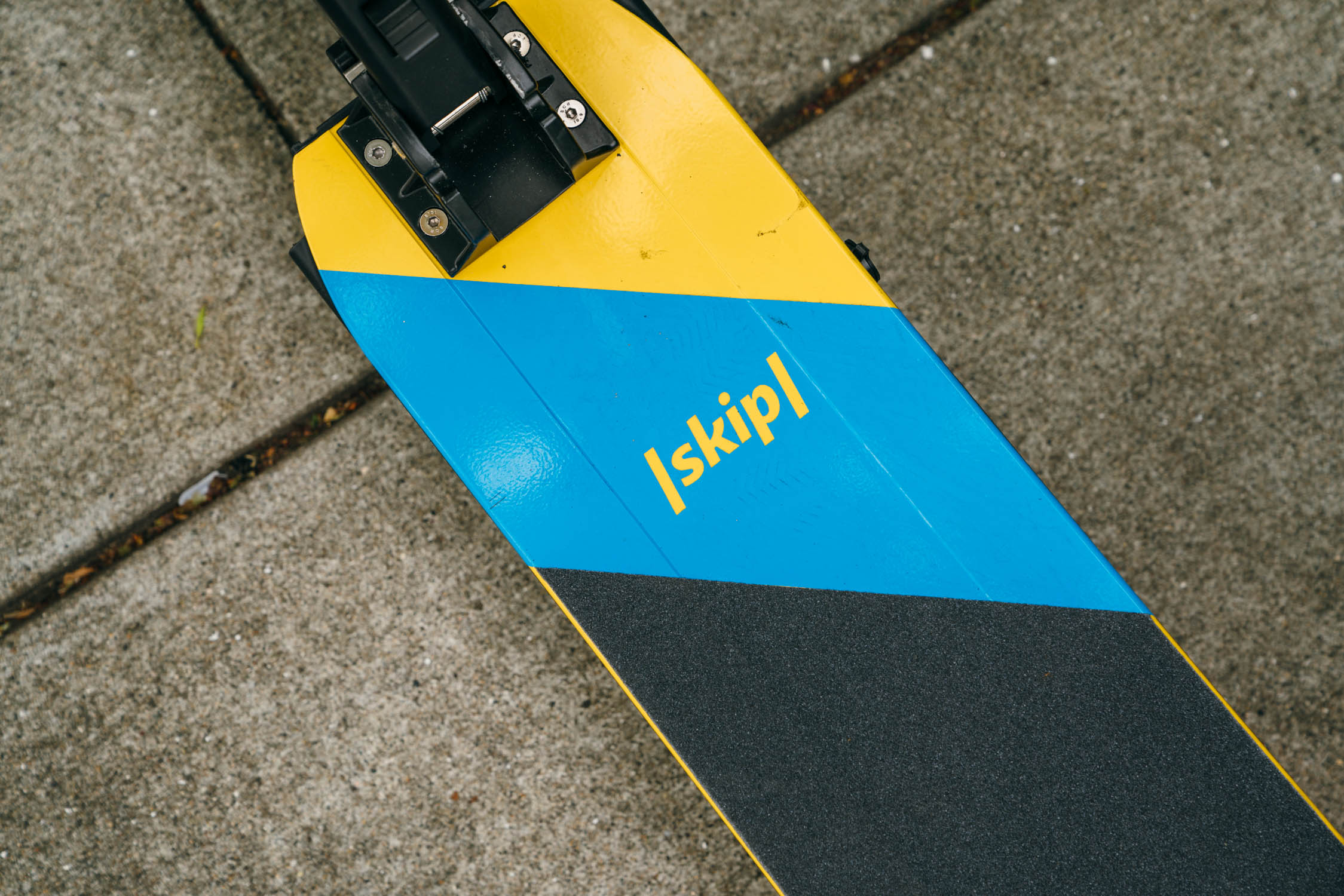 With Spin, the company does have plans to build its own scooters, but isn’t ready to announce details. What Spin CEO Euwyn Poon would share with me is that the company has spun up a custom production line and supply chain.

GOAT, on the other hand, is deliberately taking the partnership route, having developed GOAT on top of a Segway scooter since the beginning.

“This decision was based not only on a superior quality scooter and the ability to maintain this quality at scale, but also our ability to work side-by-side with the Segway team in Changzhou, China and remotely here in Austin,” GOAT co-founder Jennie Whitaker told TechCrunch in an email. “We believe that it’s important to focus on what you’re the best at, which means allowing Segway to produce superior electric scooters while we focus on building technology to solve mobility problems for the world.”

A new side hustle

Just like ride-hailing apps like Uber and Lyft created new jobs, electric scooter companies seem to be doing the same. During some March public hearings in SF, companies touted how their respective services create jobs for people in low-income communities. Given that each player’s scooters need to be charged, they’re relying on everyday people to scoop up these scooters at night, charge them and then drop them off early the next morning.

Lime, for example, has its Juicer program. Bird has its Charger program, Spin has its Squad program and Skip has street team chargers. Spin pays $5 per scooter, Bird pays between $5 to $25 per scooter charged, depending on how hard it is to find the scooter. And Lime pays up to $12 per scooter, depending on the location.

In March, Harry Campbell over at The Rideshare Guy documented what it was like to be a charger for Bird. The TL;DR is that he had a good time and he could see how it would make sense for people looking to make some extra cash. 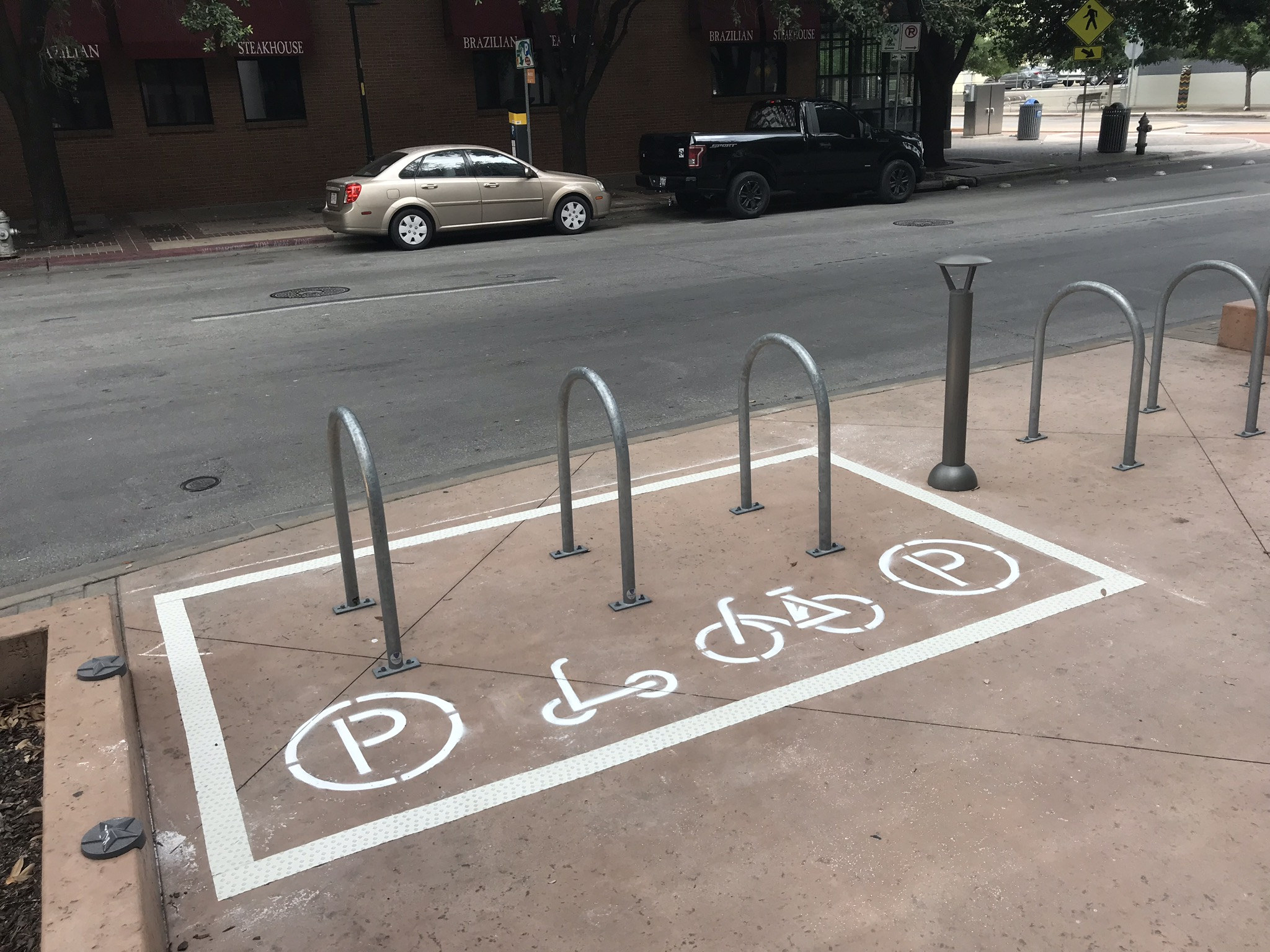 Moving forward, companies are looking at ways to ease some of its effects on sidewalk congestion, which has been a primary concern for city dwellers and legislators. In March, SF Supervisor Jane Kim said she didn’t envision handing out permits until the city could figure out a better way to dock the scooters. At the time, the SFMTA said the onus is on the companies to ensure proper docking and that it’s willing to work with each company around that process.

But over in Austin, the city has taken matters into its own hands. In May, the city adopted new rules that require riders to park in designated areas. This decision was inspired by some action Seattle took around dockless bicycles.

Each city will, of course, regulate in whichever way they think is best. But these designated scooter parking areas do seem like a solid way to ensure people aren’t tripping over scooters left in the middle of the street. 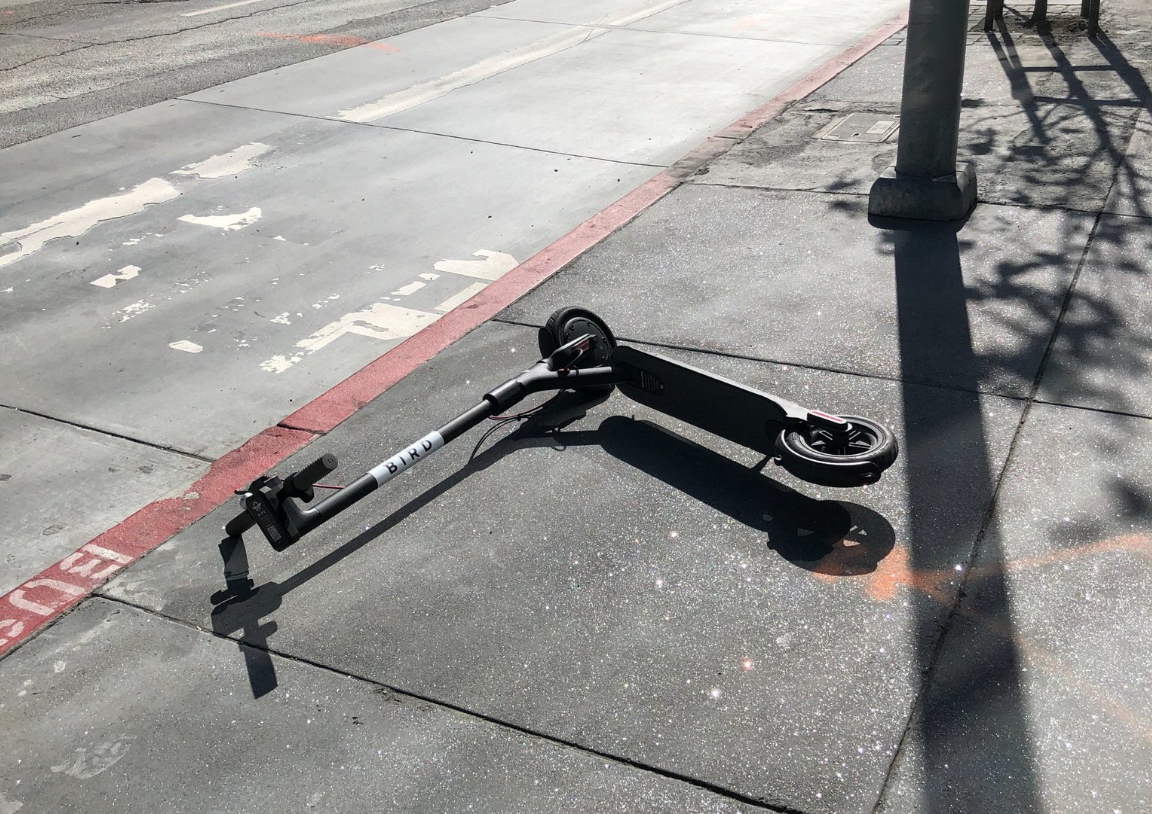 A fallen Bird in SF

In addition to figuring out a way to handle scooter parking, companies also have to worry about vandalism and theft. In SF, before the temporary ban, it wasn’t uncommon to see scooters with graffiti, cut wires or with dismembered parts.

Companies, of course, account for things like this and are keeping tabs. Lime told me lost scooters and vandalism affects less than one percent of its overall fleet across markets.

If you’ve made it this far in the story, I tip my hat to you. Be sure to holler at me if you see scooters behaving badly, launching in new markets or yelling at people on the streets.