An optical illusion popular in the 19th century could make trips on the Hyperloop appear to take place in a transparent tube. Regularly spaced, narrow windows wouldn’t offer much of a view individually, but if dozens of them pass by every second an effect would be created like that of a zoetrope, allowing passengers to effectively see right through the walls.

It’s an official concept from Virgin Hyperloop One and design house Bjarke Ingels Group (BIG), and in fact was teased back in 2016. Now the companies have shared a video showing how it would work and what it would look like for passengers — though there’s no indication it would actually be put in place in the first tracks.

A zoetrope is a simple apparatus consisting of a cylinder with slits on the sides and a series of sequential or looping images printed on the inside. When the cylinder is spun, the slits blur together to the eye but have the effect of showing the images on the inside clearly as if they are succeeding one another — an elementary form of animation.

Want an example? Here’s Pixar breaking down a zoetrope it built for Disney’s California Adventure:

The design concept shown is actually a linear zoetrope, in which the images are viewed not as a loop inside a cylinder, but in a long strip. You may have seen these before in the form of animated advertisements visible through the windows of subways. 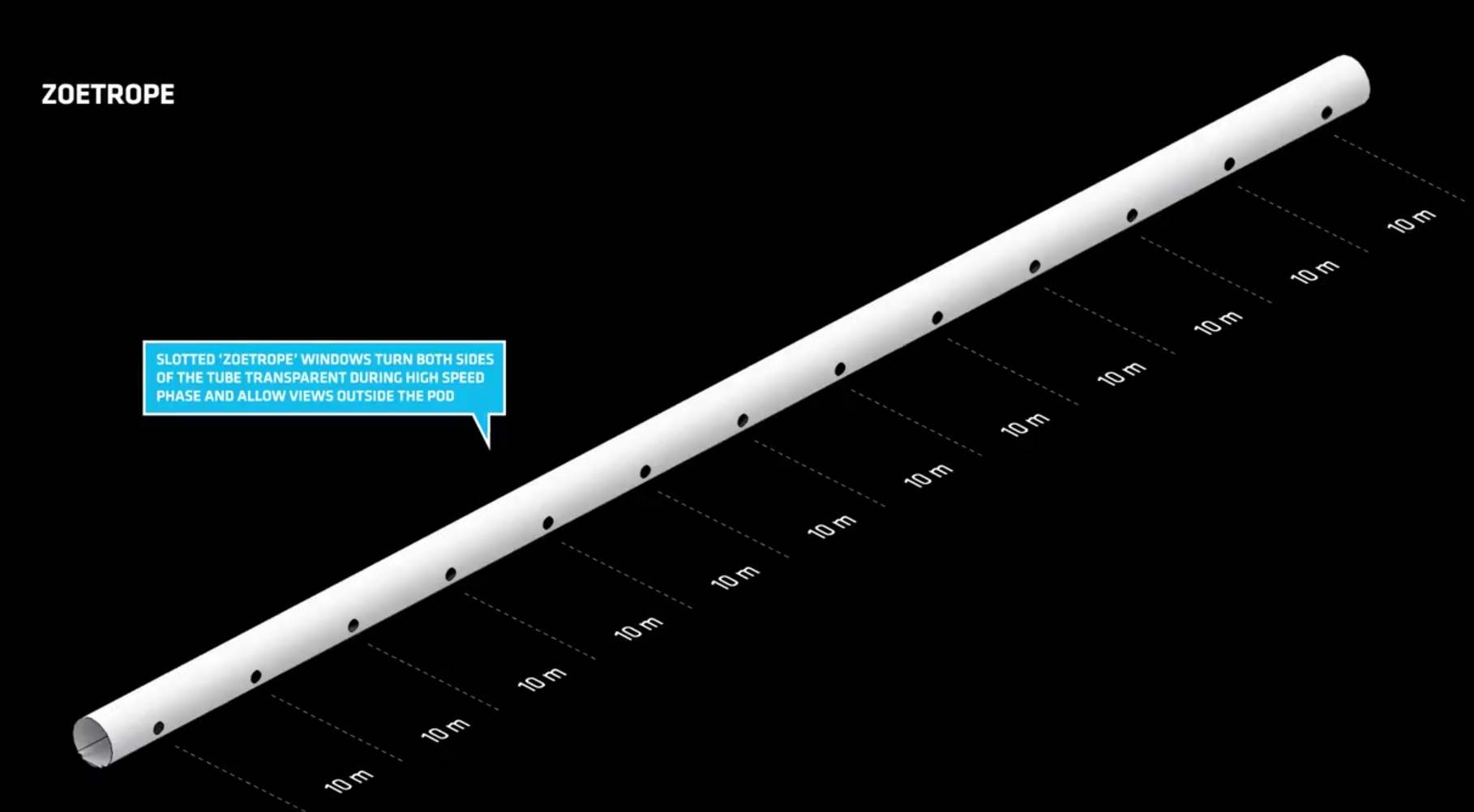 In the case of the Hyperloop, the tube through which the “pod” moves would have portholes or slit windows placed every 10 meters through which the outside world is visible. At low speeds these would merely zoom by a few per second and might even be unpleasantly strobe-like, but that would smooth out as the pods reach their target speed of 1200 KPH (about 745 MPH).

The team simulated how it would appear in the video below:

Is it really necessary? You could, of course, just provide a faked view of the outside via LCD “portholes” or have people focus on their own little TV screens, like on an airplane. But that wouldn’t be nearly as cool. Perhaps the windows could double as escape or access hatches; as you can see above on the existing test track, there are already such holes, so this may be easier than expected to implement.

Of course, it all seems a little premature, as Hyperloop type transport is still very much in prototype form and existing endeavors to bring it to life may in fact never come to fruition. Nevertheless, it is a clever and interesting way to solve the problem of preventing people from thinking about the fact that they’re traveling at ludicrous speeds down a narrow tube.