The National Transportation Safety Board has released a preliminary report detailing the fatal crash involving a Tesla Model X in March. The crash also resulted in a fire and shut down two lanes of Highway 101 near Mountain View, Calif. At this point, the NTSB has yet to determine a probable cause of the crash and is continuing to investigate the accident.

The report says the Model X, while in Autopilot mode, sped up to 71 mph in the seconds leading up to the crash.

“At 3 seconds prior to the crash and up to the time of impact with the crash attenuator, the Tesla’s speed increased from 62 to 70.8 mph, with no precrash braking or evasive steering movement detected,” the report states. 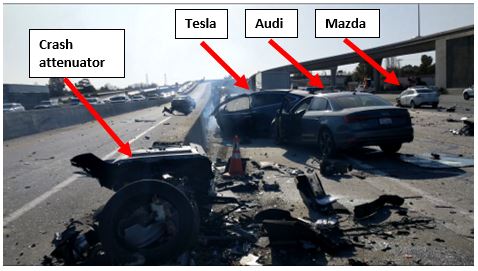 Tesla’s Autopilot mode is designed to match the speed of a slower vehicle traveling ahead of it. At the time, Autopilot was set to 75 mph, according to the NTSB.

A Tesla spokesperson declined to comment but pointed me to its March blog post, where the company describes how the driver’s hands were not detected on the wheel for the six seconds prior to the collision. The NTSB confirmed that in its preliminary report today.

“Tesla Autopilot does not prevent all accidents – such a standard would be impossible – but it makes them much less likely to occur,” Tesla wrote in a March blog post. “It unequivocally makes the world safer for the vehicle occupants, pedestrians and cyclists.”

Walter Huang, the owner of the car who died as a result of the crash, had previously taken his car into the Tesla dealership, saying his car had a way of veering toward the exact barrier his car hit, ABC7 reported. Tesla, however, previously said it has no record of Huang complaining about Autopilot.