Is it time to swipe left on the swipe? Badoo, a UK-based dating app with some 388 million users globally — whose majority-owned app Bumble is currently being sued by Tinder in part for its use of swiping — says that it will be removing the gesture from its own app as a way to let users browse profiles. In its place, the company says it is rolling out a new feature called Badoo Live — live video broadcasts to help people show off their personalities on the platform in a more authentic way, after its users said they were losing interest in swiping.

“Badoo is all about real dates, not just matches or swiping; we want to get our users offline and face-to-face,” Badoo’s CEO and founder Andrey Andreev said to TechCrunch in a statement. 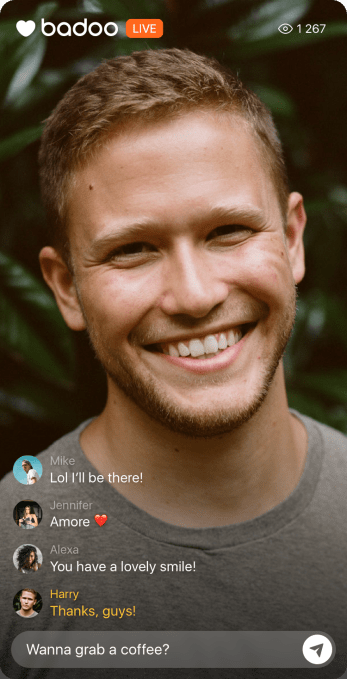 Users will be able to send messages during a live session, which appears to work on a principle similar to Facebook Live, where people can catch widely broadcast streams as they happen, or watch them in playback mode. Once a match is made, users can start a live video chat with each other (a feature launched last month).

Badoo says that users can access live streams by clicking on the Badoo Live tab and watch live streams that are broadcasting during that moment. In testing currently, the feature will be rolled out this summer.

The swiping gesture is a common one in the mobile world, where people rely on quick and imprecise movements to send commands to apps and interact with their small screens with a minimum of fuss.

But after it was made popular in the world of dating apps specifically by Tinder, the swipe has more recently become a point of contention.

Match Group, which controls Tinder, earlier this year filed a patent and intellectual property infringement lawsuit against rival app Bumble, which is majority owned by Badoo (and founded by a co-founder of Tinder), in part related to the latter app’s use of the swipe.

Bumble, it alleges, “copied Tinder’s world-changing, card-swipe-based, mutual opt-in premise,” among other accusations related to similarities between the two apps’ designs. Bumble has responded with its own suit. (To complicate things, it seems that Badoo is exploring a sale, and Tinder’s owner has tried to buy Bumble, but so far these two have yet to make a match.)

To be very clear, Badoo denies that today’s announcement is connected in any way with the lawsuits’ focus on swiping. Rather, it says it’s the result of a survey it ran with millennials (18-30 year-old) British consumers, who appear to have grown tired of the swipe and are looking for more something closer to real life before taking the plunge and agreeing to an actual in-person meeting.

“We are testing the removal of our ‘encounters’ feature, as our research shows that people now value real life interactions and want to see more of the person behind the profile picture,” Andreev said to TechCrunch. “Badoo Live, launching soon, will give our users the chance to let their true personalities shine through; interact in real time and ultimately, form more genuine connections.”

Badoo’s research covered 5,000 respondents, among whom 74 percent said they were looking for more “real-life dating experiences” and 68 percent said they “dislike swiping,” which they perceive as a shallow way of interacting. Broadcasts, Badoo found, were deemed by 83 percent of respondents as a more comfortable indicator of whether they would want to meet someone.

At a time when we’ve seen both ups and downs for user-generated live video streaming services — Facebook and YouTube continue to ramp their live plays up; and Vimeo is now also entering the fray; but there is some evidence that Periscope is on the wane — Badoo Live is an interesting turn and will be worth watching how it catches on.

One of the attractions (sorry for the pun) of apps based on swiping has been the fact that a user can take a gradual and rapid approach to figuring out if another person is someone he or she would like to meet. Live video may be more “authentic”, but it also throws some of that efficiency out the window: one tester of the service, Badoo said, has already used Badoo Live to stream a friend’s wedding… for 13 hours.