Microsoft today announced its plans to acquire GitHub for $7.5 billion in stock. Unsurprisingly, that sent a few shock waves through the developer community, which still often eyes Microsoft with considerable unease. During a conference call this morning, Microsoft CEO Satya Nadella, incoming GitHub CEO (and Xamarin founder) Nat Friedman and GitHub co-founder and outgoing CEO Chris Wanstrath laid out the plans for GitHub’s future under Microsoft.

The core message everybody on today’s call stressed was that GitHub will continue to operate as an independent company. That’s very much the approach Microsoft took with its acquisition of LinkedIn, but to some degree, it’s also an admission that Microsoft is aware of its reputation among many of the developers who call GitHub their home. GitHub will remain an open platform that any developer can plug into and extend, Microsoft promises. It’ll support any cloud and any device.

Unsurprisingly, while the core of GitHub won’t change, Microsoft does plan to extend GitHub’s enterprise services and integrate them with its own sales and partner channels. And Nadella noted that the company will use GitHub to bring Microsoft’s developer tools and services “to new audiences.”

With Nat Friedman taking over as CEO, GitHub will have a respected technologist at the helm. Microsoft’s acquisition and integration of Xamarin has, at least from the outside, been a success (and Friedman himself always seems very happy about the outcome when I talk to him), so I think this bodes quite well for GitHub. After joining Microsoft, Friedman ran the developer services team at the company. Wanstrath, who only took over the CEO role again after its last CEO was ousted after harassment scandal at the company, had long said that he wanted to step down and take a more active product role. And that’s what’s happening now that Friedman is taking over. Wanstrath will become a technical fellow and work on “strategic software initiatives” at Microsoft.

Indeed, during an interview after the acquisition was announced, Friedman repeatedly noted that he thinks GitHub is the most important developer company today — and it turns out that he started advocating for a closer relationship between the two companies right after he joined Microsoft two years ago.

During today’s press call, Friedman also stressed Microsoft’s commitment to keeping GitHub as open as it is today — but he also plans to expand the service and its community. “We want to bring more developers and more capabilities to GitHub, he said. “Because as a network and as a group of people in a community, GitHub is stronger, the bigger it is.”

Friedman echoed that in our interview later in the day and noted that he expected the developer community to be skeptical of the mashup of these two companies. “There is always healthy skepticism in the developer community,” he told me. “I would ask developers to look at the last few years of Microsoft history and really honestly Microsoft’s transformation into an open source company.” He asked developers to judge Microsoft by that and noted that what really matters, of course, is that the company will follow through on the promises it made today.

As for the product itself, Friedman noted that everything GitHub does should be about making a developer’s life easier. And to get started, that’ll mean making developing in the cloud easier. “We think broadly about the new and compelling types of ways that we can integrate cloud services into GitHub,” he noted. “And this doesn’t just apply to our cloud. GitHub is an open platform. So we have the ability for anyone to plug their cloud services into GitHub, and make it easier for you to go from code to cloud. And it extends beyond the cloud as well. Code to cloud. code to mobile, code to edge device, code to IoT. Every workflow that a developer wants to pursue, we will support.” 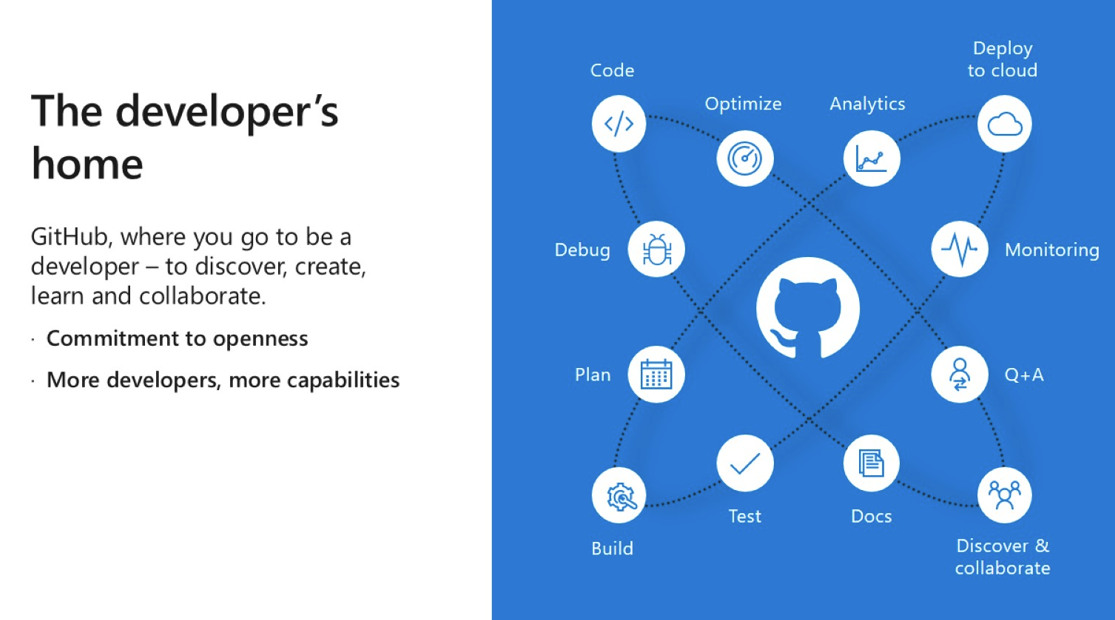 “Our vision is really all about empowering developers and creating a home where you can use any language, any operating system, any cloud, any device for every developer, whether your student, a hobbyist, a large company, a startup or anything in between. GitHub is the home for all developers,” said Friedman. In our interview, he also stressed that his focus will be on making “GitHub better at making GitHub” and that he plans to do so by bringing Microsoft’s resources and infrastructure to the code hosting service, while at the same time leaving it to operate independently.

It’s unclear whether all of these commitments today will easy developers’ fears of losing GitHub as a relatively neutral third-party in the ecosystem.

Nadella, who is surely aware of this, addressed this directly today. “We recognize the responsibility we take on with this agreement,” he said. “We are committed to being stewards of the GitHub community, which will retain its developer-first ethos operate independently and remain an open platform. We will always listen to develop a feedback and invest in both fundamentals as well as new capability once the acquisition closes.