Podcasts are television for the earbud generation.

And podcasts have been around for a surprisingly long time. If you’re one of the folks who got hooked on podcasts around 2014, when Sarah Koenig and other producers from This American Life launched the wildly popular Serial podcast, you might think that it’s a brand new medium. But podcasts — audio that’s packaged and syndicated over RSS — have been around since the early 2000s.

And although many podcasters make money, typically through sponsorships, the podcasting industry (such as it is) hasn’t received much in the way of venture funding until quite recently. 2017 was a pivotal year for venture investment in the industry.

In the chart below, we plot deal and dollar volume for venture rounds raised by companies that are either in Crunchbase’s podcast category or use the word “podcast” in their descriptions: 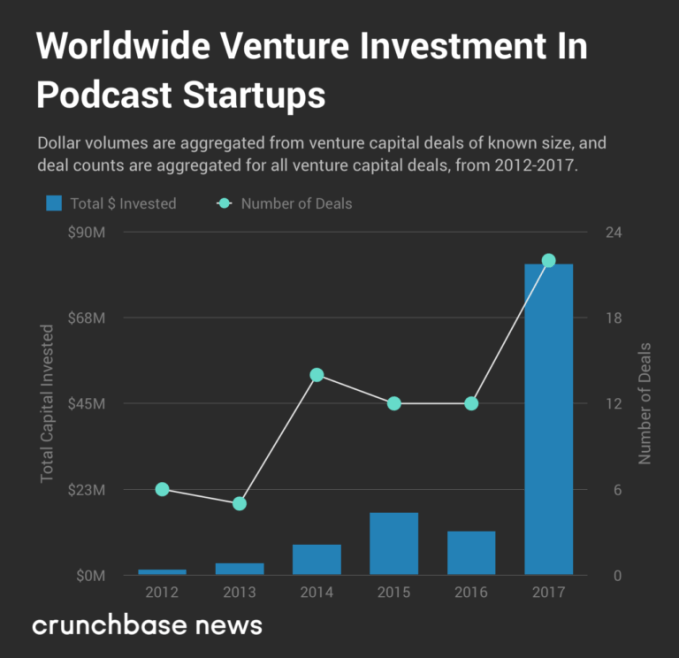 In charts like this, one typically expects a significant spike in dollar volume to come from one really big round, but that’s not what happened in the podcast world. Rather, there were several large deals struck with early-stage companies in the space. Here are some of the highlights from 2017:

So far in 2018, a number of other podcasting startups also raised venture funding, including West Hollywood-based podcast network Wondery, which raised $5 million in a Series A round. A company with a name that’s a little on-the-nose, The Podcast App, went through Y Combinator.

VC interest in podcasting: Why now?

Why has the podcast industry taken so long to appeal to VCs in a big way? In part, it’s a fairly decentralized industry. While there are some larger podcasting networks, most podcasts are still produced and promoted independently. But, perhaps more importantly, the business value of podcasts has been difficult to quantify until relatively recently. Unlike a web page or streaming video platform, where basically every user action can be tracked and optimized, historically it’s been difficult to analyze podcast listening habits and target ads.

But this is changing. Podcasts are now a mainstream medium for news and entertainment. And in December 2017, Apple, a longtime podcast booster and the largest distributor of podcasts, rolled out podcast episode analytics. This lets podcast producers and their advertisers know whether people actually listened to the entire episode and heard the ads. (Note: a few smaller podcast players offered similar analytics and ad monitoring features before Apple did.)

This leads some investors to believe they can achieve “venture scale” returns by putting money into podcasting startups.