Apple is fixing one of the worst parts of the concert experience: waiting in line for a beer while you miss your favorite song. Last week’s BottleRock music festival near San Francisco was the first to try a new “order ahead with Apple Pay” feature that Apple hopes to bring to more events. You just open the festival’s app, select the closest concession stand, choose your drinks, Apple Pay with your face or fingerprint and pick up the beverages at a dedicated window with no queue.

Check out our demo video below.

BottleRock’s upscale wine and oldies music fest, 100 miles from the tech giant’s headquarters, has become a testbed for Apple Pay. Last year, every concession stand got equipped with the Square’s Apple Pay-ready point of sale system and special fast lanes for customers who used it instead of cash or credit card. Thirty percent of all transactions at BottleRock were made with Apple Pay, according to an Apple spokesperson, proving people wanted a faster way to get back to the show. 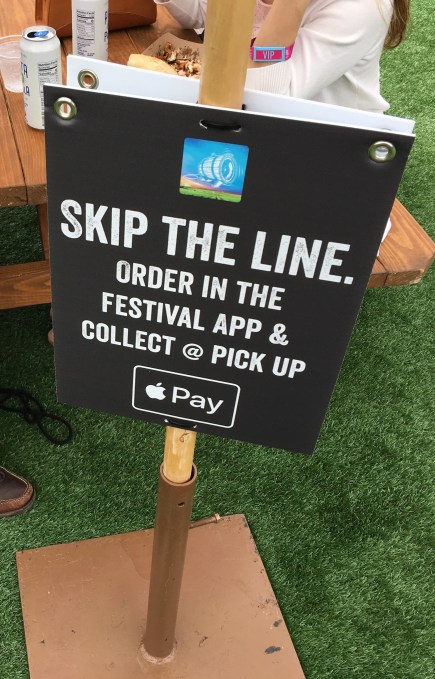 With order ahead, your drinks are ready for pick up so you don’t even have to break your dance stride. Having gone to 14 Coachellas, I’d learned to forego booze rather than risk losing my friends or a chance to hear that hit single while stewing in the beer garden lines. But Apple Pay powered the best concert commerce experience I’ve had yet. I’m sure I’m not the only one who knocked back a few more drinks last weekend because it was so convenient.

That’s why I foresee music festivals jumping at the chance to integrate into their apps order ahead with Apple Pay. They and their vendors will see more sales, while attendees see more music. Meanwhile, it’s a smart way for Apple to reach a juicy demographic. Apple Pay is especially helpful when you’re in a rush, but festival goers will return home more likely to use it day-to-day.

Often times, music festival tech, like friend-finding apps and location-based alerts, can interrupt the moment. Apple Pay succeeds here by fading away, keeping you in harmony with the present.