imToken, which claims to be the world’s largest Ethereum wallet, will focus on expanding in Asia and the United States after raising a $10 million Series A from IDG Capital, it announced today. The capital will also be used to add new features, including support for Bitcoin, EOS and other blockchains.

imToken is the latest addition to IDG Capital’s cryptocurrency investments, which include Coinbase and Circle. In a press statement, IDG Capital partner Young Guo said “imToken has developed its product into one of the top crypto asset wallets in the world with such a sound reputation. We believe it will become a significant infrastructure for the tokenization manifesto, benefitting both the crypto economy and blockchain technology. We’re excited to back imToken.” 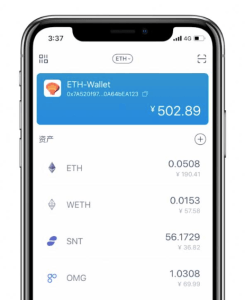 Founded in 2016 by chief executive officer Ben He and based in Hangzhou, imToken’s core market is currently China. The company supports 30,000 tokens, claims more than 4 million monthly active users and says it handled $35 million in pass-through transactions last year.

He tells TechCrunch the company will use its new capital to study local regulations and launch imToken 2.0 international in new markets. It will focus first on Southeast Asia before looking toward other Asian countries, like Korea, Japan and India, where “regulations are maturing quickly and as a result we’re doing our due diligence amid increasing scrutiny from local governments,” He says.

Then imToken will concentrate on countries in Africa, including Nigeria, where they already have a user base. Its expansion into the U.S. will happen at the same time as the rest of its international roll out.

In addition to the imToken wallet, the company’s services also include Tokenlon, an in-app decentralized exchange in partnership with Kyber Network and 0x, and DApp store, a marketplace for decentralized mobile apps.

In its new markets, especially the U.S., imToken will face several established competitors, including digital services MyEtherWallet, Coinbase and Ledger Nano, as well as a host of hardware wallets. He is sanguine about the competition, saying the goal of all blockchain companies is to move the technology forward and that imToken has built positive relationships with its rivals.

He adds that imToken’s advantage, however, is “taking a step further than our competitors, as we’re focused on building an ecosystem within imToken for all our users.” The company wants to “move toward a blockchain-agnostic stage,” which means users will be able to store different assets in one of imToken wallets. Then it wants to lower the barrier for entry into blockchain tech by making it easier to manage assets across different platforms, including peer-to-peer transactions and merchant payments, with imToken 2.0 International.