Starling, the U.K. challenger bank founded by banking veteran Anne Boden, is in the early stages of raising a significant new funding round as part of plans to double down on its newly launched business current account, TechCrunch has learned.

According to a person familiar with the matter, Starling is looking to raise around £80 million in additional capital from new investors. To assist in the process, the company is hiring a new international advisory firm, pointing to an investor search that potentially goes beyond the U.K. and could include large international institutional investors. Up until now, Starling has been funded to the tune of £48 million by hedge fund manager Harald McPike, who, as a result, owns more than 50 per cent of the venture.

The need for Starling to increase its capital is thought to be related to the bank’s bid to be one of the recipients of the Capability and Innovation fund, which was set up by Royal Bank of Scotland to fulfill European state aid conditions arising from the bank’s £45 billion U.K. government bailout during the financial crisis. The fund will be split into different grants to help “challenger banks and other financial services providers” diversify and develop their business current account offerings for small and medium-sized enterprises.

Thought to be up against incumbents Santander, Metro Bank, Clydesdale Bank, and TSB, Starling is looking well-placed to win the £120 million “Pool A” grant, which is being decided by an independent panel — not least if the fund is to meet its remit of genuinely increasing competition within SME banking. (Starling’s Boden has been quite outspoken on the matter.) 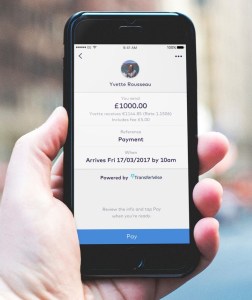 Starling and TransferWise integration as it might have looked

Related to this, Starling is busy recruiting a “double-digit” team for its SME banking unit. I understand from sources that executive search consultants have been engaged to work on senior hires and that this will include a new head of SME banking.

Meanwhile, Starling recently launched international payments within its consumer-facing current account, news it published on its blog and that was picked up in the fintech media. However, less well reported is that the bank has quietly dropped its previously announced partnership with fintech unicorn TransferWise.

Back in March 2017, the two companies issued a joint press release detailing the partnership that would have given Starling customers “direct, in-app access” to TransferWise’s international money transfer service. The functionality was due to launch the following summer but never materialised (something that seemingly went unnoticed by most outlets). Now I understand the partnership has dissolved entirely.

“TransferWise is working with many banks to transform international payments for their customers, with more to come in the near future. In this instance Starling have chosen another route but it’s fantastic to see they’ve kept the price transparency of the real exchange rate and clear separate fees.”

“Our partnership with TransferWise was always about meeting customer demands. As we developed out our payments business it became clear to us that integrating with a third party payments provider in the Starling Marketplace didn’t offer the best customer experience. We figured that we could provide a better user experience by doing it ourselves. As you know, Starling is all about customer service”.

Of course it’s never a good look when two companies announce with fanfare a major partnership that delivers nothing but vapourware — Starling were still briefing that it was working with TransferWise in late 2017 — even if it is perfectly reasonable for an upstart bank to switch strategy as the broader competitive climate changes. In this instance, since the original announcement, Starling has made significant headway on its own Starling Payments business, and TransferWise launched its own “borderless” banking product and debit card. Perhaps this is simply the case that partnering whilst increasing feature parity doesn’t always make for happy bedfellows.