Salesforce just keeps on growing revenue. In another remarkable quarter, the company announced 3.01 billion in revenue for Q1 2019 with no signs of slowing down. That puts the CRM giant on a run rate of over $12 billion with the company’s most optimistic projections suggesting it could go even higher. It’s also the first time they have surpassed $3 billion in revenue for a quarter.

As you might expect Salesforce chairman and CEO Marc Benioff was over the moon about the results in the earnings call with analyst yesterday afternoon. “Revenue for the quarter rose to more than $3 billion, up 25%, putting us on $12 billion revenue run rate that was just amazing. And we now have $20.4 billion of future revenues under contract, which is the remaining transaction price, that’s up 36% from a year ago. Based on these strong results, we’re raising our full year top line revenue guidance to $13.125 billion at the high end of our range, 25% growth for this year,” Benioff told analysts.

Brent Leary, an analyst who has been watching the CRM industry for many years, says CRM in general is a hot area and Salesforce has been able to take advantage. “With CRM becoming the biggest and fastest growing business software category last year according to Gartner, it’s easy to see with these number that Salesforce is leading the way forward. And they are in position to keep moving themselves and the category forward for years to come as their acquisitions should continue to pay off for them,” Leary told TechCrunch.

Bringing Mulesoft into the fold

Further Benioff rightly boasted that the company would be the fastest software company ever to $13 billion and it continued on the road towards its previously stated $20 billion goal. The $6.5 billion acquisition of Mulesoft earlier this year should help fuel that growth. “And this month, we closed our acquisition of MuleSoft, giving us the industry’s leading integration platform as well. Well, integration has never been more strategic,” Benioff stated. 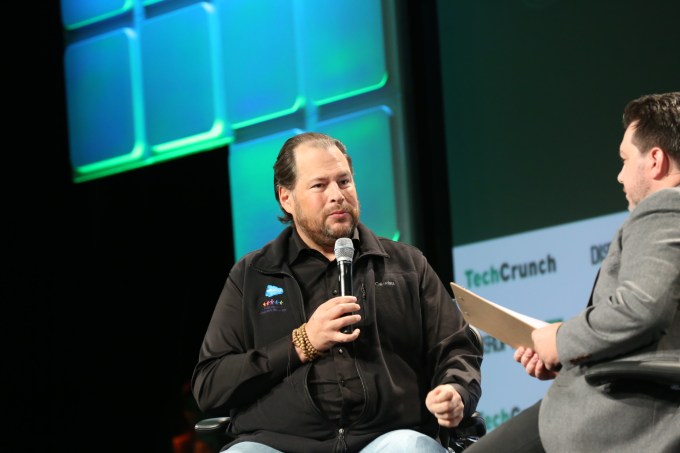 Bret Taylor, the company’s president and chief product officer, says the integration really ties in nicely with another of the company’s strategic initiatives, artificial intelligence, which they call Einstein. “[Customers] know that their AI is only as powerful as data it has access to. And so when you think of MuleSoft, think unlocking data. The data is trapped in all these isolated systems on-premises, private cloud, public cloud, and MuleSoft, they can unlock this data and make it available to Einstein and make a smarter customer facing system,” Taylor explained.

Leary thinks there’s one other reason the company has done so well, one that’s hard to quantify in pure dollars, but perhaps an approach other companies should be paying attention to. “One of the more undercovered aspects of what Salesforce is doing is how their social responsibility and corporate culture is attracting a lot of positive attention,” he said. “That may be hard to boil down into revenue and profit numbers, but it has to be part of the reason why Salesforce continues to grow at the pace they have,” he added.

All of this has been adding up to incredible numbers. It’s easy to take revenue like this for granted because the company has been on such a sustained growth rate for such a long period of time, but just becoming a billion dollar company has been a challenge for most Software as a Service providers up until now. A $13 billion run rate is in an entirely different stratosphere and it could be lifting the entire category says Jason Lemkin, founder at SaasStr, a firm that invests in SaaS startups.

“SaaS companies crossing $1B in ARR will soon become commonplace, as shocking as that might have sounded in say 2011. Atlassian, Box, Hubspot, and Zendesk are all well on their way there. The best SaaS companies are growing faster after $100m ARR, which is propelling them there,” Lemkin explained. 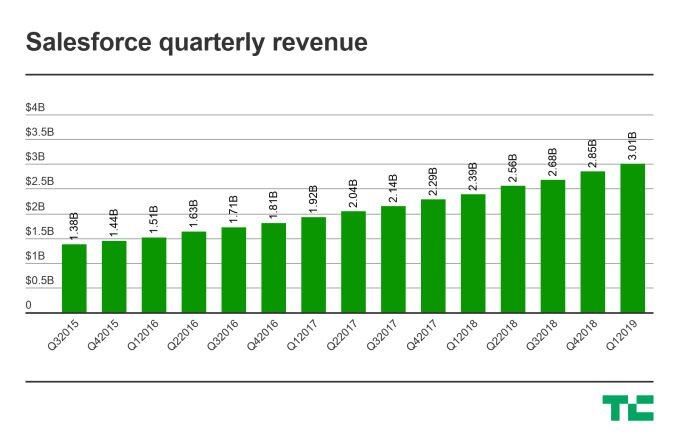 Salesforce is leading the way. Perhaps that’s because it has the same first-to-market advantage that Amazon has had in the cloud infrastructure market. It has gained such substantial momentum by being early, starting way back in 1999 before Software as a Service was seen as a viable business. In fact, Benioff told a story earlier this year that when he first started, he did the rounds of the venture capital firms in Silicon Valley and every single one turned him down.

You can bet that those companies have some deep regrets now, as the company’s revenue and stock price continues to soar.  As of publication this morning, the stock was sitting at $130.90, up over 3 percent. All this company does is consistently make money, and that’s pretty much all you can ask from any organization. As Leary aptly put it, “Yea, they’re really killing it.”