Helios will own 51 percent of the new company, while EFO Films will own 49 percent.

EFO Films’ library includes titles like Lone Survivor, Broken City, Rambo, The Amityville Horror, Escape Plan, The Frozen Ground, and has upcoming titles that include 2Guns, Escape Plan 2, Escape Plan 3; and a movie based on the video game Asteroids by Atari, among others. 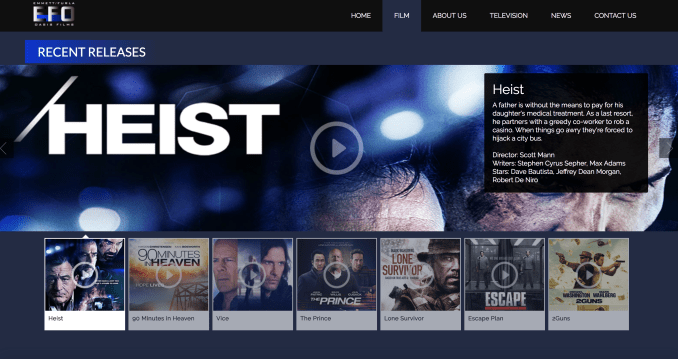 Variety was first to report the news, in an interview with Helios and Matheson CEO Ted Farnsworth; MoviePass has also put out a press release.

The acquisition is part of MoviePass’ larger plan to not only push moviegoers back into theaters by offering them a more affordable, subscription service for in-person movie watching, but also to back, distribute and profit from its own movies or stakes in movies. The company had already taken steps into this space, by buying distribution rights to films, as with The Orchard’s “American Animals” at Sundance. It also has a low seven-figure equity stake in the John Travolta “Gotti” film, Deadline reported last month – which is part of the EFO slate.

MoviePass is promising distributors its app can push its 3 million subscribers to the film’s opening weekend, but it also aims to generate revenue further down the road from things like international and streaming distribution, merchandising, music, and other ancillary rights.

The move to acquire EFO Films comes at a critical time for MoviePass, where questions are swarming over how long this company – and its cash – can really last. Its stock has been dropping, last week reaching a record low of 40 cents a share. An SEC filing confirmed earlier this month the company had just $15.5 million in the bank, and the firm has been going through around $21.7 million per month.

To keep going, MoviePass could sell more stock or borrow cash – like from that $300 million line of credit Farnsworth mentioned at Cannes –  but its business model is increasingly been viewed as unsustainable. And yet MoviePass keeps doubling down on what appears to be a losing hand – even bringing back its unlimited subscription plan after pulling it the month before, with little explanation beyond “we’re experimenting.”

Despite the chaos surrounding the company, the stock actually got a bump up last week, on news of Citadel Securities’ disclosure of its 5.4 percent stake in Helios and Matheson. Other shareholders include Farnsworth himself, and Verizon’s Oath (which also owns TC), as result of Oath’s recent sale of its Moviefone business to Helios and Matheson in April.

“Ever since we co-acquired our first film with MoviePass Ventures, American Animals, which is set for release this coming June 1, we’ve been looking for an opportunity to acquire and produce content on a larger scale, and prove the power of the MoviePass service in the process,”said Ted Farnsworth, Chairman and CEO of Helios, in a statement about the acquisition. “We believe we’ve found that opportunity with Emmett Furla Oasis Films. MoviePass Films and MoviePass Ventures, our studio driven production company and our independent film investment division, will both play integral roles in our grand business strategy,” he added.

“To do a deal with Helios and MoviePass is epic for us,” he said. “The MoviePass subscription service has totally disrupted the movie industry, for the better.  When we worked with MoviePass Ventures on the movie Gotti…I immediately saw how revolutionary the MoviePass service is.  I have never seen any player in our industry move so quickly and gain such a large following in such a short period of time,” Emmett continued. “What impresses me the most is that MoviePass can guarantee box office attendance, which is a game changer.  I don’t believe anybody else can do that.”

Yes, but for how long?