Facebook’s Messenger Kids application, which allows children under 13 to chat with parents’ approval, is today rolling out a small, but notable change – it no longer requires that the children’s parents be Facebook friends with one another, in order for the children to connect. This solves one of the problems with the app’s earlier design, where it operated more like an extension of a parents’ own social circle, instead of one for their child.

Of course, parents still have to approve every contact their child adds, as usual.

As any parent understands, there are always going to be those friends of your child where you have an acquaintance-type, friendly but casual relationship with the parents that falls short of earning “Facebook friend” status. While you might text them for the occasional play date or nod politely at drop-off, you’re not necessarily “friends.” But your kids are friends with each other. And you’re fine with that.

The Messenger Kids update now allows those kids to connect, if you okay it. 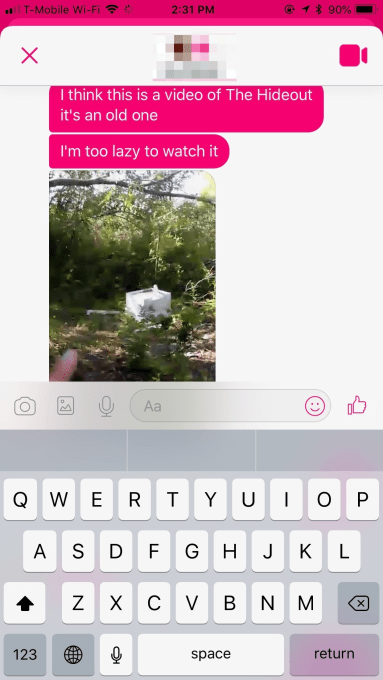 The new feature will still require that both parents are on Facebook.

On Facebook, the parent visits the Messenger Kids section in Facebook’s own main navigation menu, as per usual, and does a search for the name of the parents of the child’s friends. You can then invite them to get the app and allow the children to connect.

This change could potentially help the app grow beyond the 500,000 installs it now has, according to Sensor Tower data – especially once the kids figure out how this invite system works. (And don’t put it past them to just inform you.)

Facebook says it made this decision as a direct result of parent feedback.

However, there is one challenge in not being good friends with the other kids’ parents: it can be harder to discuss problems like bullying or bad behavior, if they come up. With my daughter’s half a dozen or so friends on Messenger Kids (hey, I know), I’m not worried about these things because I know the parents well enough to have a discussion if the kids start fighting. We’d work together to resolve the problems, were they to occur. (And obviously, her family connections on the app are not an issue).

But when you start approving connections with those families you’re less close to, you may run into issues and not have a good way to communicate about them.

That’s why Facebook should be working to roll out systems that flag concerns in kids’ chat sessions – if a bad word is used, for example, or if the child says something rude – that alerts the child’s own parents. The company already has A.I.-based anti-bullying technology that could do this now. And I imagine many parents would opt into a system that asks if you wanted to be alerted to offensive language in chats.

Even a simple chat and call log could help parents address problems – like tell me how often I need to remind my daughter that we don’t place video calls to friends before 9 AM…even if you see them playing Animal Jam and know they’re online. Rules are rules, kiddo.

As it stands now, the best way to monitor the child’s chats is to install a second copy of the app on your own device and actually read them. That takes time and can be a little bit invasive for older kids, who have more of a sense of privacy.

The update is live today on the Messenger Kids app.

* This post was updated after publication with more current install data from Sensor Tower. Earlier, we said Messenger Kids had 350K installs as of April. It has now just passed 500K.