Google is increasing its focus on India after it released a new social app that’s aimed at building neighborhood communities within cities in the country.

The company’s ‘Next Billion’ team in charge of emerging markets has dedicated significant resources to India. Its initiatives include data-friendly versions of YouTube and other popular services, its Tez mobile payment app, a food delivery service and a national WiFi network initiative. Now it is adding one more to the list with the release of Neighbourly, a Q&A app for sharing local knowledge.

The basic goal is to give local communities an outlet to seek answers to practical questions about local life, routine and more. Google believes that an increase in urban migration, short-term leasing and busy lives has changed the dynamic of local communities and made it harder to share information quite so easily.

“Life happens close to home, in order the of a 1-2km radius, and local questions come up all the time. But as cities get bigger and bigger, we’re finding that these local questions are getting hard to use — word of mouth used to be key,” Josh Woodward, a product manager within the Next Billion initiative, explained to TechCrunch.

“We built neighborly as a way to connect you with your neighborhood, ask questions, share expertise and stay up to date in a safe way,” he added.

This idea is nothing new, of course. Already in India, WhatsApp — which counts 200 million users in the country — has a range of community groups, but the big issue is discovery since new users have to be added to the group directly.

The new Google app is much like Jelly, the question and answer service from Twitter co-founder Biz Stone that was ultimately bought by Pinterest, but with localized tweaks. A beta version of the app is initially available in Mumbai, but users located in other areas can join a waitlist pending expansion. 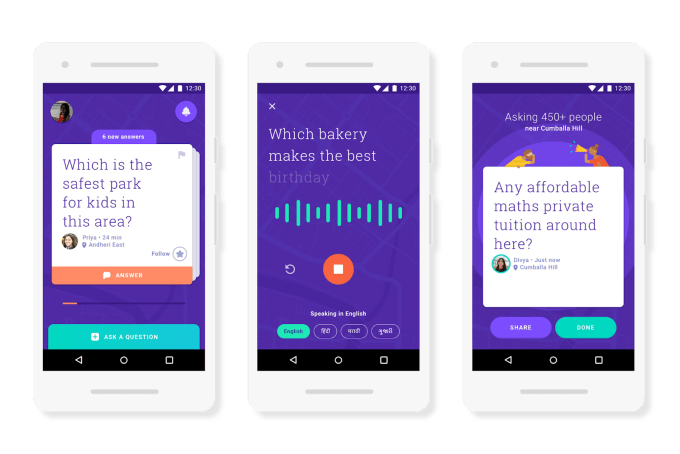 Questions and answers are handled via swipeable cards — who knew Tinder’s design would reach neighborhood community apps in India — while the app uses GPS to add a user into their neighborhood right from sign-up.

Woodward said Google is employing ranking and personalization technology which, over time, will match users with the kind of questions they can answer or have shown an interest in. For now, the service is app-based with a read-only mobile web version.

Google’s local tweaks to make the app easy to use include voice-based entry for questions, which covers a range of India’s non-English languages, and a series of prompts that pop up when a user decides to post a question to help them start.

The company has looked at safety issues, and made it easy to flag content which is unsuitable. Once flagged, Woodward confirmed the content is passed to a local content moderator who asses whether it is “neighborly.”

In terms of safety, users sign up using a first name only, there is no private messaging or phone number requirement, and individual profile photos cannot be copied via screenshot and don’t expand when clicked to prevent being stolen. That taps into concern women have about their photos being abused, an issue that Facebook has taken measures against in India, too.

In fact, at sign-up, Google asks users to agree to a ‘contract’ — “I will respect my neighbors” — before letting them into the app. But still, you’d imagine that the laws of the internet will mean that some people will misuse the service.

Profile pages do, however, display badges earned by answering questions — both an incentive and a display of trust, according to Woodward — while users can follow, and be followed, to keep with certain users and their content.

Google tested the app on thousands of users over a period of about a month to get the mechanics right. Woodward said that 30-50 percent of questions were answered within five minutes, which bodes well but discovery looks like being the key issue. That was ultimately the downfall of Jelly, albeit that both apps serve very different audiences and purposes.

Further down the line, Woodward said that Google could add business accounts and integrate other Google services into Neighbourly, but for now the sink-or-swim challenge is to make an impact.

The launch of Neighbourly comes the same day that Google launched Files Go in China. In doing so, the search giant gave a glimpse at its new strategy for China, which involves opportunistic product launches, relationships and strategic investments.