At the end of the day, there are a lot of processes running on smartphone-optimized chipsets that aren’t really necessary for the average virtual Joe’s experience in a face computer. While tacking on more and more power to these headsets has generally been the dominating wisdom of the past five years, it’s getting to the point where the hardware that can be built has reached the good-enough stage and it’s time to bring costs down and focus on shipping units.

To herald in this necessary step, Qualcomm announced today it has built a dedicated chipset for standalone headsets. The Snapdragon XR1 is the company’s first chipset focused exclusively on AR and VR, which the company is collectively referring to as “XR.” 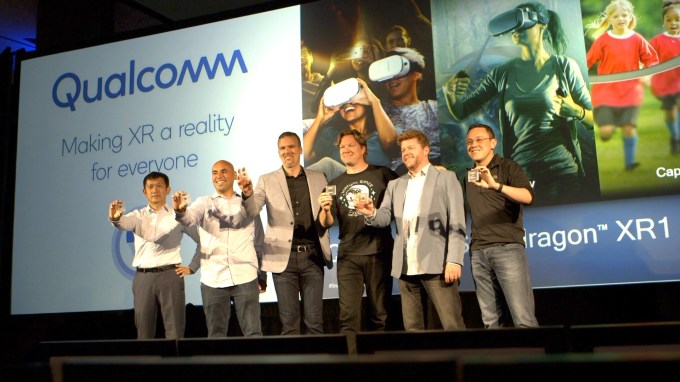 Users will be able to enjoy experiences like streaming 4K 30fps content on XR1-powered devices. The company had a number of headset manufacturers onstage for the announcement, including HTC Vive, Vuzix, Meta and Pico. There are not many headsets being shipped today, but Qualcomm is preparing for a near future where it believes unit sales will cross into the hundreds of millions.

Qualcomm was mostly mum on details of how this chipset performs relative to the newly released Snapdragon 845 — which has its own VR reference design — but it seems fair to assert that the XR1 is probably a lower-cost option for hardware manufacturers that know exactly what they need and don’t want to pay to for an architecture that’s built around handling tasks that their devices won’t tackle.

While the Snapdragon 845 is looking to push headsets toward the capabilities offered by PC-tethered systems, the XR1 is looking at low-cost devices that have a better chance at making it on shelves in the near-term. The XR1 won’t support free-moving 6DoF like the 845, but will support tighter movements like its 835 VR platform did.

In an email responding to questions from TechCrunch, Qualcomm XR lead Hiren Bhinde said the new chipset “will handle fewer workloads as opposed to the 845 for similar power and thermal benchmarks,” while noting that, “[t]here are also some AR customers who don’t need the high graphics or memory bandwidth supported in 845 for their devices, which is what makes the XR1 a perfect fit for them.”

When compared to some of today’s standalone VR headsets, many current untethered consumer AR headsets are lightweight in their compute demands because they’re not focused on replicating the world to the fidelity that VR is attempting. Headsets that simply offer a heads-up display and a voice assistant like those being shown off by Qualcomm XR1 partner Vuzix differ from what Magic Leap and Microsoft are pursuing with their “mixed reality” devices, which enable sophisticated environment mapping so that digital objects can find a natural place in a viewer’s periphery.

By building a chipset with lower-cost mass-market headsets in their sights, Qualcomm seems convinced that the time to strike is now and that the XR1 could give manufacturers in the AR/VR space the added boost they need to start shipping hardware.