Let’s flash back to the Machine Age, the period in American history that gave us the assembly line, the first nonstop transcontinental flight, regular radio broadcasts, and the first robot capable of performing more than 20 movements. These technological advancements inspired a style of art called Precisionism, popularized by big names like Georgia O’Keefe, Charles Sheeler and Charles Demuth.

The Cult of the Machine exhibit at the de Young museum in San Francisco is a reflection of attitudes toward machines and robotics during the Machine Age, the period between the two world wars during which industrial efficiency was the reigning mantra. In an era where efficiency was seen as both beautiful and as a threat, there was an influx of art inspired by anxieties people had about the rise of industrial technology. The exhibit rehashes the “are machines a friend or foe to humans?” debate through a Precisionist lens with a thorough, possibly too thorough, collection.

Curated by Emma Acker, the exhibit is predominantly Precisionist works. Precisionism is an early 20th century American modernist style that was born from artists who synthesized European cubism and futurism with the American vision of industrial, urban themes. We see smokestacks, factories, bridges and skyscrapers painted with geometric, smooth techniques.

Technologists today have expressed concern about the takeover of robotics, decline in manufacturing jobs, losing control to AIs, biased algorithms and the loss of craftsmanship to machines. Every tech company has a strategy around machine learning and AI. Venture capitalists are investing in robotics startups. There are robots designed to make pizzas. Robots that autonomously deliver goods through the last mile. Autonomous vehicles designed to replace drivers and flying cars on the horizon. Tech continues to make our world more efficient and convenient, but it’s impossible to predict whether machines will eventually help or hinder us as a species. When strolling through the Cult of the Machine exhibit at the de Young, one starts to wonder if this line of questioning will ever end.

Duality of machines as light and dark

The de Young collection is a balance between the anxieties Americans felt toward technology during the Machine Age, mixed with the hope that technology brought to a more connected, convenient world. One gallery dives into menacing interpretations of what technology meant during the period. Charles Sheeler’s “Suspended Power,” a 1939 oil on canvas depicts a large machine hanging over a few small humans in a factory — a stark representation of the immense, barely-controlled power technology can exert over humanity — and how with one mis-engineered piece, we could be crushed. The piece is the star of the exhibit, encapsulating the looming, unquantifiable threat of the future. 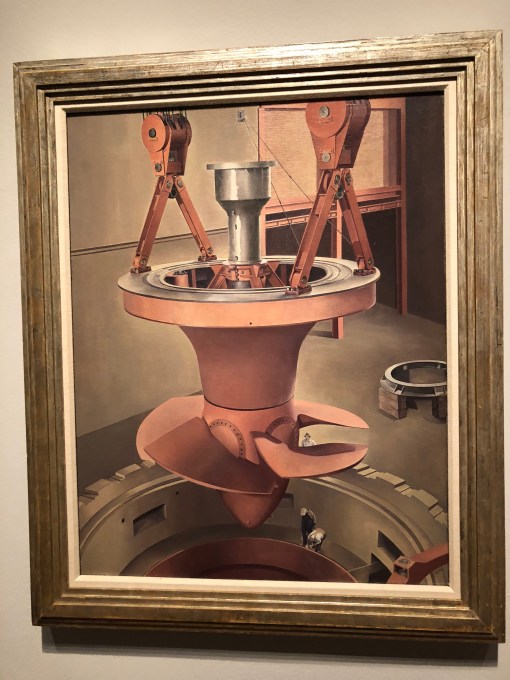 Artists certainly saw the darkness in America’s worship of industry. Take Charles Demuth’s, “Incense of a New Church,” 1921. Here a factory is compared to a church, smoke to incense. 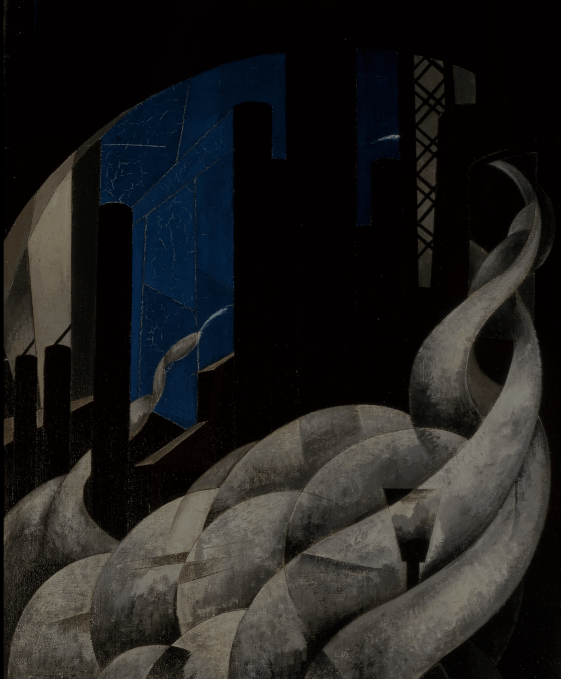 Much of the exhibit is scenes of factories, smokestacks and urban landscapes void of humans, movement and color. The pieces themselves look like they were painted by machines, with no brush strokes to be detected. It could be the combination of the monotony of this art — the quantity of motionless urban landscapes — that makes parts of the exhibit feel empty and tedious. But that just may be the point. 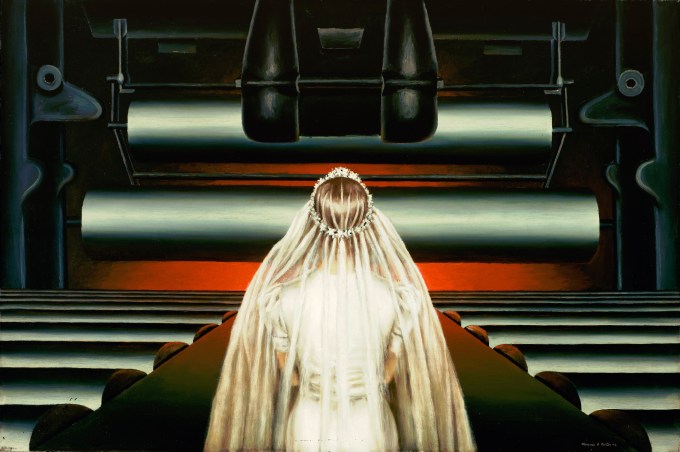 The absence of human error evokes anonymity and alienation that exist in a technological world. There’s an eerie emptiness to these close up shots of mechanical systems. Yet they are the small pieces that make up our world.

During the Machine Age, the demand for efficiency became the driving force of the modern era. Its easy to see how efficiency was confused with beauty, rather than seen as the fulfillment of economic needs. Yet artists were finding meaning in the intersection of art, commerce and industry.

“I speak in [the] tongue of my times. The mechanical, the industrial. Anything that works efficiently is beautiful.” – Charles Sheeler.

This exhibit is not by any means beautiful. There is nothing here that one might be inspired to hang on a living room wall.

However, for the first time “artists started to discover beauty and meaning in our American fabric of industry and production and elevated it to the level of fine art,” says Acker. “The ideas and themes explored in the works from this period seem to resonate so much with our current moment. That’s what I wanted to emphasize. Precisionism was the springboard for thinking about larger themes around our relationship to technology during the Machine Age and today. And how the excitements and anxieties Americans experienced around tech innovation are reflected in our same social forces today.”

Conflict between humans and machines

Perhaps the most interesting part of the exhibit is an interactive feature that invites visitors to select three words out of 30 to express what technology means to them. Some of the options are: creative, interconnected, revolutionary, automated, isolating, surveillance, collaborative, addicting, alienating, cold. At the end of the exhibit the most frequently-selected words are displayed in a collective word portrait. 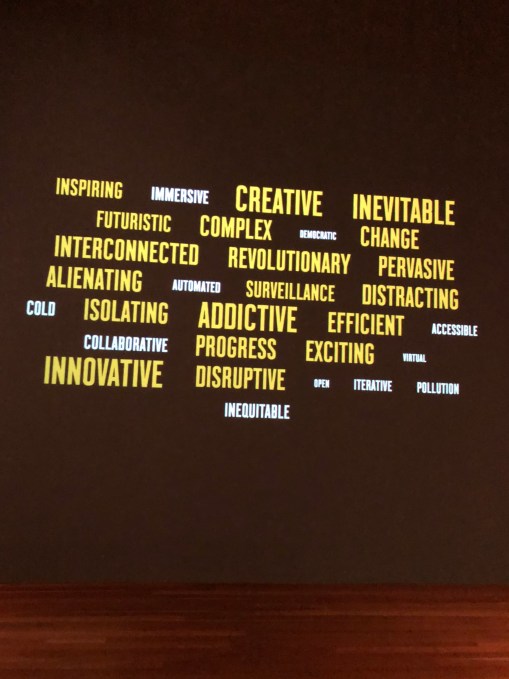 The word cloud is updated every three seconds, and is contrasted with another word cloud. The other is a composite of Machine Age terms describing technology, drawn from 1920s-1930s American periodicals. Size and color of the words is determined by how frequently it appeared in the texts. It seems the visitors of this exhibit have more optimistic views of tech than the media during the Machine Age did. 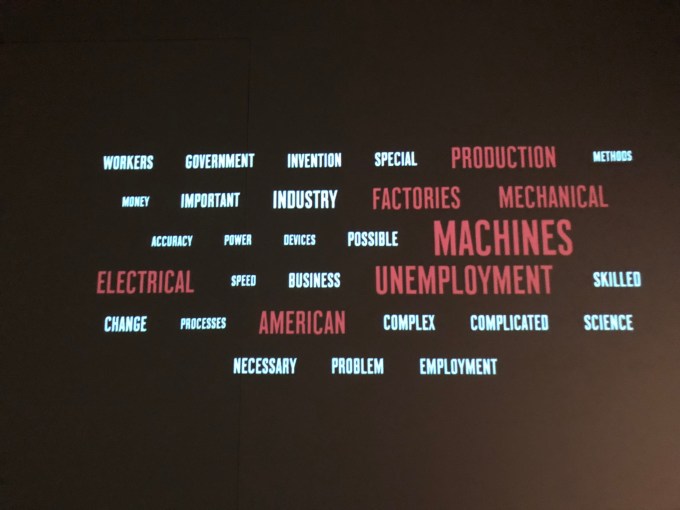 Overall the exhibit connects two views of technology: a cult-like promise of a better engineered world, and the crushing fear of the unknown threatening humanity’s livelihood.

Where does this leave us now? “We can relate to [the Machine Age] now as we enter this 4th industrial revolution. We’re looking forward with excitement and some trepidation toward disruption, displacement and changes on the horizon,” says Acker.

Cult of the Machine: Precisionsim and American Art runs through August 12, 2018 at the de Young Museum in San Francisco. For those interested in exploring how tech has shaped art throughout American history, this exhibit is one to see.