Disliking one’s internet provider is such a common condition that it’s hard to imagine that ISPs have anywhere to go but up in the eyes of their customers. Nope! There are new lows ahead, if the latest American Customer Satisfaction Index is any indication. Charts ahead!

The ACSI compiles thousands of interviews with consumers and produce a score for various companies and industries based on a number of metrics. And this year, internet providers fell from last place to last place minus. 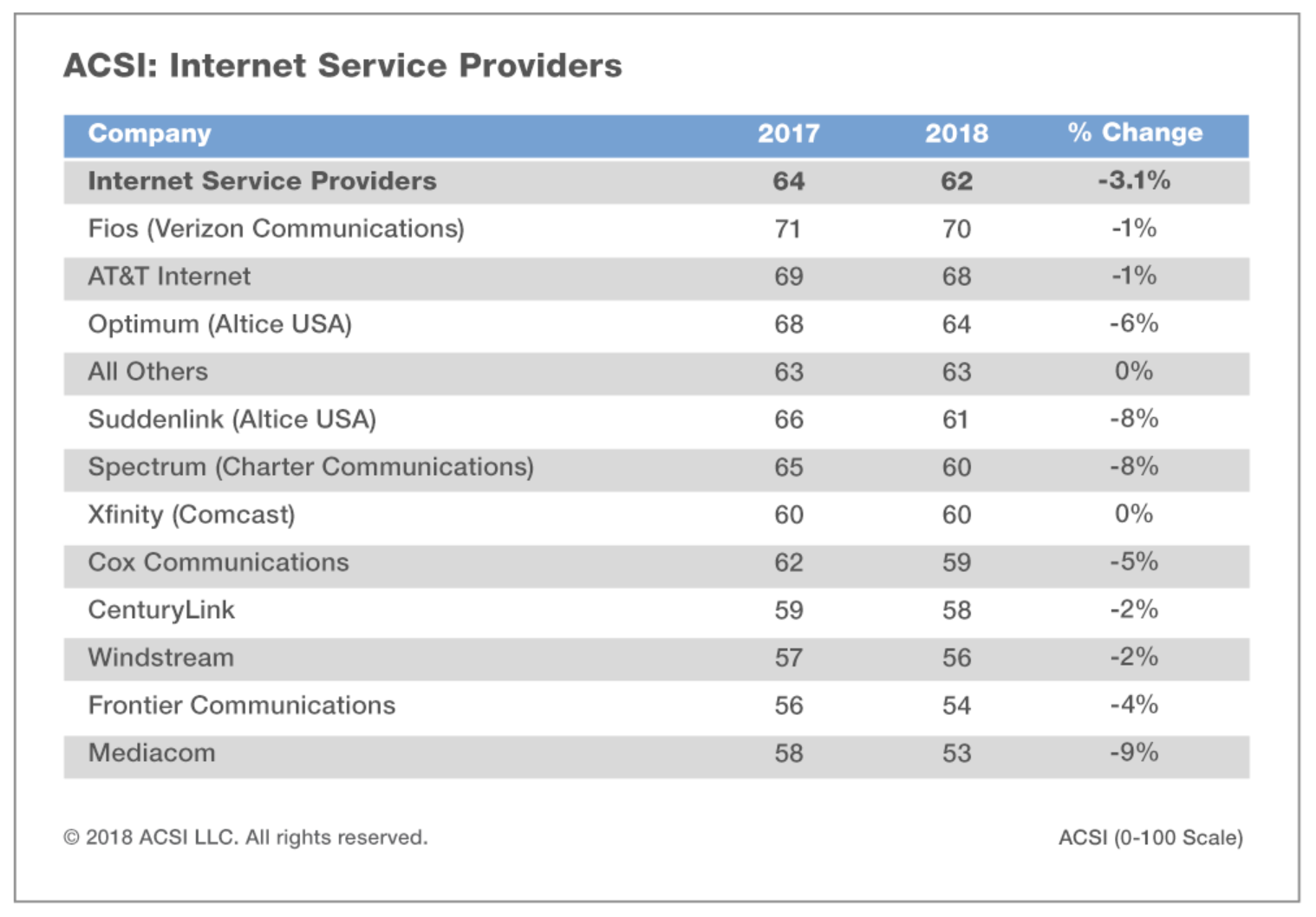 “An all-time low for the industry that along with subscription TV already had the poorest customer satisfaction among all industries tracked by the ACSI,” the report reads. “Customers are unhappy with the high price of poor service, but many households have limited alternatives as more than half of all Americans have only one choice for high speed broadband.”

Despite what the FCC and broadband companies like to say, few people have more than one good choice for internet provider, unlike even other industries that are dominated by a handful of companies, like mobile. And the service people do have access to isn’t inspiring loyalty.

Pretty much every category saw a drop, despite ardent promises from the likes of Comcast and Cox to improve their customer service and simplify bills and offers.

A sample of ratings the ISPs received – dark blue is the latest.

I myself actually just had a good interaction with Comcast, but because it was just a nice customer service agent helping me navigate the company’s labyrinth of misleading offers and upsells, I consider it as breaking even. Or it would have if my bill hadn’t just nearly doubled without any notification, so in the end it’s probably a negative.

Streaming services and video on demand were included in the survey for the first time this year, and did fairly well. Netflix, PlayStation Vue and Twitch were well thought of, and even the worst-ranked service, Sony’s Crackle, beats most of the perennially disliked pay TV providers. Strangely enough, most of the latter are the very same providers are often the same as the perennially disliked broadband providers. Coincidence? You be the judge.

Worse than social media? These days that’s quite a feat.

Overall, those companies are at the very bottom of the list, below even airlines and insurance companies — and ironically, the TVs that are used to watch the content are at the very top of the heap. Time to step up your game, ISPs.