Well, that didn’t take long. Yahoo Finance’s new social savings app Tanda, which launched just this January, is already shutting down. The company announced the news of the app’s closure via a blog post, which vaguely hinted at a lack of traction. That appears to be true – the app isn’t even in the top 1,500 in the Finance category on the App Store, according to Sensor Tower’s data.

It had been installed around 37,000 times to date across both iOS and Android.

Still, tens of thousands in the first few months isn’t an entirely horrible showing for app that received almost no attention, marketing effort or media outreach. (We happened upon it practically by accident – not because Yahoo reached out to press. Yes, even though Yahoo is owned by Oath which also owns us, there wasn’t any internal heads-up. Or even any external pitching. In case you’re wondering!)

The app had allowed people to save money together for short-term goals using the concept of a “money pool” where a group of friends pay a fixed amount to the saving pot monthly, and every month someone takes the pot home. You didn’t “win” this pot, you took turns claiming it. In the end, it was just another way to save money, but the social element helped you stay on track.

Money pools are popular outside the U.S., in places like Mexico and the Philippines, Yahoo notes. It may have been hard to convince the U.S. audience to give them a shot, though.

In any event, Yahoo says Tanda is no more.

“While we garnered valuable insights around how consumers can benefit from financial planning tools and the opportunity for Yahoo Finance to offer a diversified suite of financial products, we’ve made the decision to begin sunsetting Tanda this week,” the blog post reads.

“Every trial run helps brands better optimize, and create a better experience for users. We’ve learned a lot from launching and running Tanda, and then scaling it back. Key learnings around audience segments, engagement rates, consumer preferences, and UX will inform the projects we are creating, and how we improve the ones that are already in the market to fuel future innovation,” it says.

Still, that was a fast learning experience, guys. 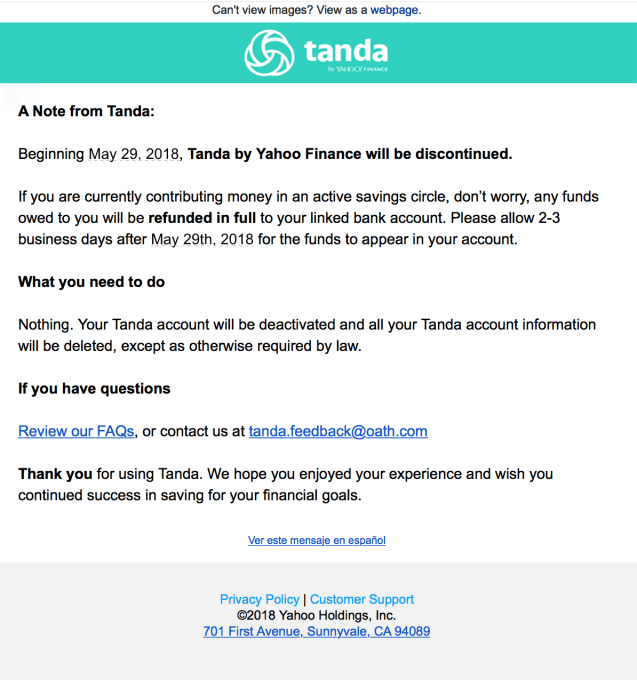 In an email sent to Tanda users, the company says the app will be shut down starting on May 29.

Any funds owed to you will be refunded in full, and then your Tanda account will be deactivated, the email states.

Yahoo declined to comment further on the reasons behind the shutdown, but said the Tanda team will continue to support Yahoo Finance.