Earlier this week, it came to light that Apple had removed a number of VoIP-based calling apps from the App Store, at the request of the Chinese government. The apps had been using CallKit, Apple’s new developer toolset that provides the calling interface for VoIP apps, freeing up developers to handle the backend communications. China’s government asked developers, by way of Apple, to remove CallKit from their apps sold on the China App Store, or they can remove their apps entirely.

Notices Apple sent out to the developers were first spotted by 9to5Mac, who shared a snippet from of one of the emails.

The email states that the Chinese Ministry of Industry and Information Technology (MIIT) “requested that CallKit be deactivated in app apps available on the China App Store,” and informed the developer they would need to comply with this regulation in order to have their app approved.

The regulation only impacts apps distributed in the China App Store.

We understand that the apps can still use CallKit and be sold in other markets outside the region.

Apple is not publicly commenting on the matter.

The pushback against CallKit is another means of discouraging people from developing or using VoIP services in China, without having to go so far as to ban the apps directly. It wouldn’t be the first time China has cracked down in this area. In November, Microsoft’s Skype was also pulled from the Apple and Android app stores.

The government also last year ordered VPN apps, which help users route around the Great Firewall, to be pulled from app stores – another order with which Apple complied.

Other social media apps, like WhatsApp and Facebook, are also disrupted at times, and newspapers’ apps like those from The NYT and WSJ are blocked, too.

According to data pulled by app store intelligence firm Sensor Tower, two dozen apps with CallKit had been removed during the week prior to the news reports.

That list, along with the date removed and publisher name, is below: 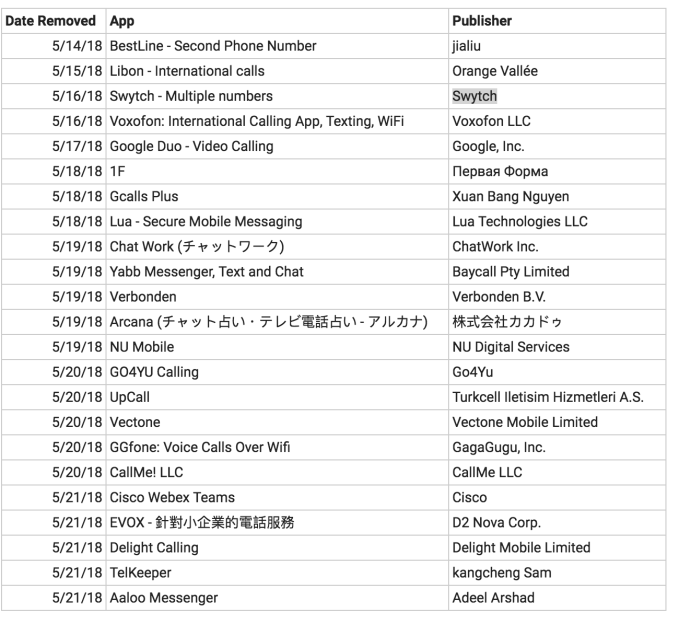 Sensor Tower notes it’s possible that there are other apps removed from additional stores, but doesn’t have that data.

In addition, this list only includes those apps that have been downloaded enough times to rank in the top 1,500 of an app category at some point – beyond that Sensor Tower wouldn’t pick it up. But an app that wasn’t ranked would have had so few downloads that the impact of its removal would be minimal.

Nevertheless, you can see list includes a few well-known names, including Cisco’s Webex Teams and Google’s Duo video calling app, among those from other operators and VoIP calling providers.

The full text of Apple’s email is below:

This app cannot be approved with CallKit functionality active in China. Please make the appropriate changes and resubmit this app for review. If you have already ensured that CallKit functionality is not active in China, you may reply to this message in Resolution Center to confirm. Voice over Internet Protocol (VoIP) call functionality continues to be allowed but can no longer take advantage of CallKit’s intuitive look and feel. CallKit can continue to be used in apps outside of China.