A cluster of U.S. news websites has gone dark for readers in Europe as the EU’s new privacy laws went into effect on Friday. The ruleset, known as General Data Protection Regulation (GDPR), outlines a robust set of requirements that internet companies collecting any personal data on consumers must follow. The consequences are considerable enough that the American media company Tronc decided to block all European readers from its sites rather than risk the ramifications of its apparent noncompliance.

Tronc-owned sites affected by the EU blackout include the Los Angeles Times, The Chicago Tribune, The New York Daily News, The Orlando Sentinel and The Baltimore Sun. Some newspapers owned by Lee Enterprises also blocked European readers, including The St. Louis Post Dispatch and The Arizona Daily Star.

It looks like all Tronc newspapers like the LA Times and Chicago Tribune are GDPR non-compliant, so all traffic from Europe is hitting this wall pic.twitter.com/vTuy902DZv

While Tronc deemed its European readership disposable, at least in the short-term, most major national U.S. outlets took a different approach, serving a cleaned-up version of their website or asking users for opt-in consent to use their data. NPR even pointed delighted users toward a plaintext version of their site.

The GDPR-compliant version of the USA Today website is so much better than the normal version it's unreal. Ad free, no autoplaying video, crisp clean design. pic.twitter.com/Cs4vRjgfJC 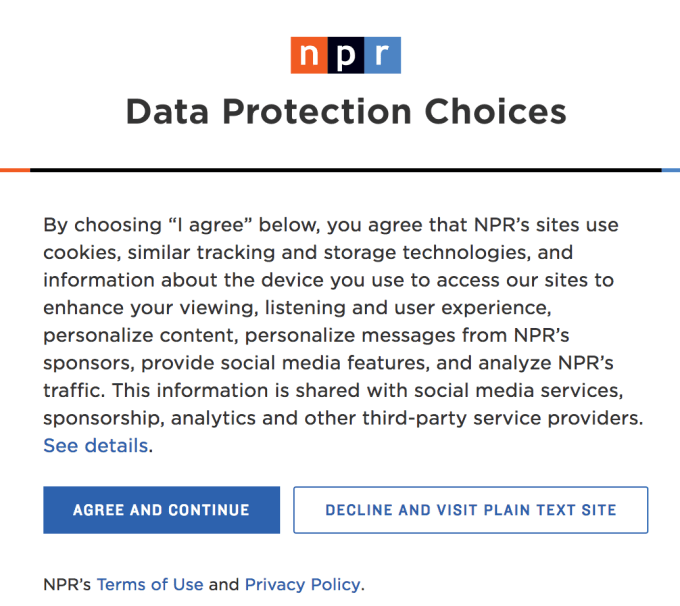 While many of the regional papers that blinked offline for EU users predominantly serve U.S. markets, some are prominent enough to attract an international readership, prompting European users left out in the cold to openly criticize the approach.

Those criticisms are well-deserved. The privacy regulations that GDPR sets in place were first adopted in April 2016, meaning that companies had two years to form a compliance plan before the regulations actually went live today.