Facebook doesn’t ban fictional characters with hateful content as a rule, but interestingly Pepe the Frog is well enough established as a hate speech symbol that Facebook has a very particular policy devoted only to the cartoon frog.

Motherboard got their hands on some content moderation policy documents from Facebook that show Pepe, a cartoon frog harmlessly created by cartoonist Matt Furie, has earned himself the bizarre honor of being the only cartoon that employees reviewing content are encouraged to delete when depicted in “the context of hate.” 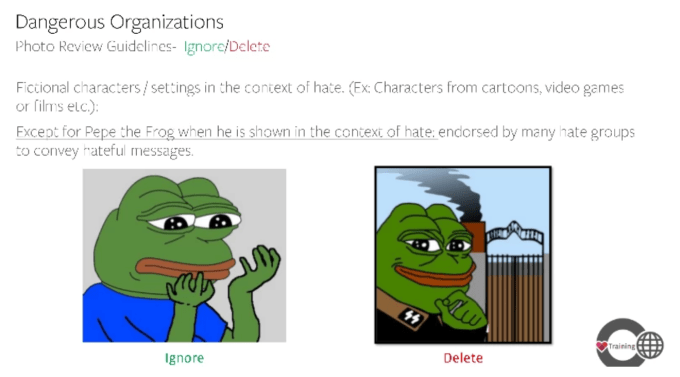 While Pepe’s popularity as a meme seems to be waning, the policy was likely born out of the classification of the frog as a hate symbol by the ADL and other orgs. Pepe was a generic meme long before he was adopted by the alt-right, but an army of internet photoshoppers managed to produce a lot of messed up stuff in a short amount of time. It’s interesting that Facebook has put such an emphasis on this cartoon alone while not having an issue with characters like Homer Simpson having Nazi imagery illustrated alongside them, as also depicted in the internal docs.