Wi-Fi password sticker on your router? Snap. Cute sweater in a store’s window display? Snap. Party invitation? Snap. Cool gift idea for mom? Snap. If any of this sounds familiar to you, then you probably also use your iPhone’s camera to take photos of the things you want to remember – maybe even more often than you use Notes to write things down. If your mental notes are more visual in nature, then you may want give the new app Collections a go instead of relying only on your Camera Roll.

I know, I know…isn’t visual bookmarking already handled by Pinterest?

Well, okay, sure. You can go that route.

But using Pinterest feels heavy. There’s a vast collection of images to explore and search. A Home feed of new stuff to look at. (Why, Pinterest, are you showing me spider tattoos? Why?). People to follow. A feed of notifications to check in on. (Where I get to write back to people things like, “hi, you’re messaging the wrong Sarah Perez. I don’t know you.” Ugh, too often. Stupid common name.)

Collections is just a little app for you to use. 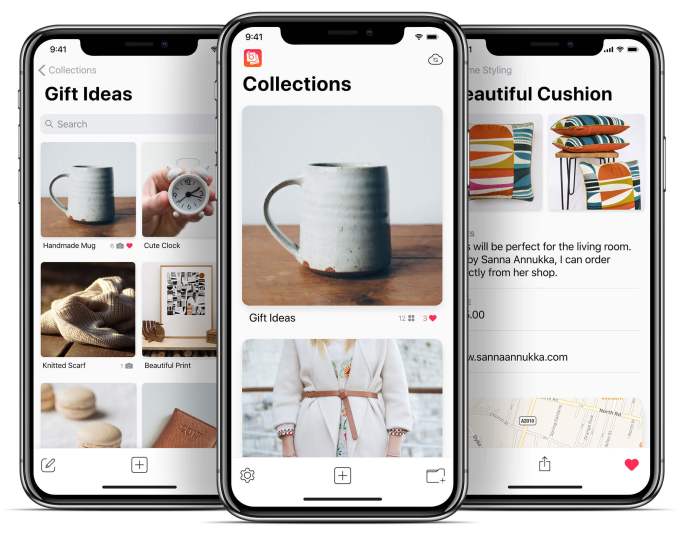 It’s not overwrought. Its simple interface just helps you to better organize those photos you’ve snapped for inspiration, ideas, mental notes, or whatever else you may need to refer back to – like clothes you like, restaurants you passed by and want to try later, art or design ideas, the best photos of your dog, events you want to go to, screenshots, gift ideas, travel inspiration, or really anything else you could think of.

But unlike saving these things to the Camera Roll, where they quickly get lost into a feed of photos, Collections lets you write down little details – like the vendor or price, or your notes. For example, “Great gift for mom. Shop owner says it also comes in blue. Having a summer sale in 2 weeks.” 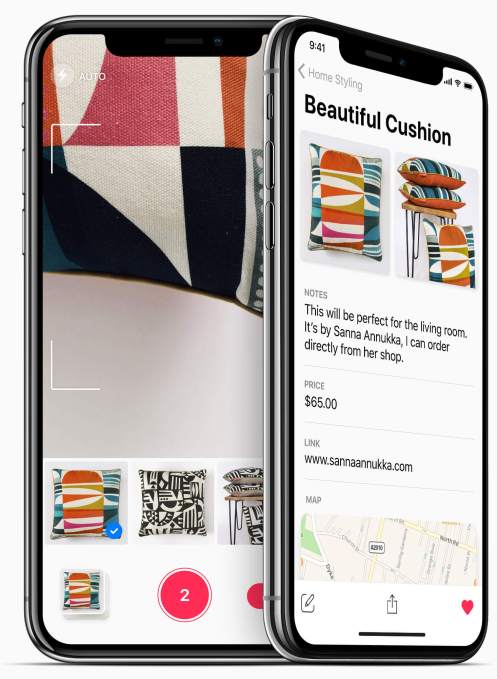 While your collections are largely meant just for you, if you ever want to share them, you can use iCloud to do so – friends and family won’t have to sign up for a new service to view your shares, just download the app. You can also share them to social media, iMessage, email, messaging apps, and elsewhere, if you choose.

If you prefer to keep your collections private, you can turn off iCloud syncing during setup to keep them saved to local storage only.

On iPad, the app is even better because it supports drag-and-drop – meaning you drag images from other apps to your collections. 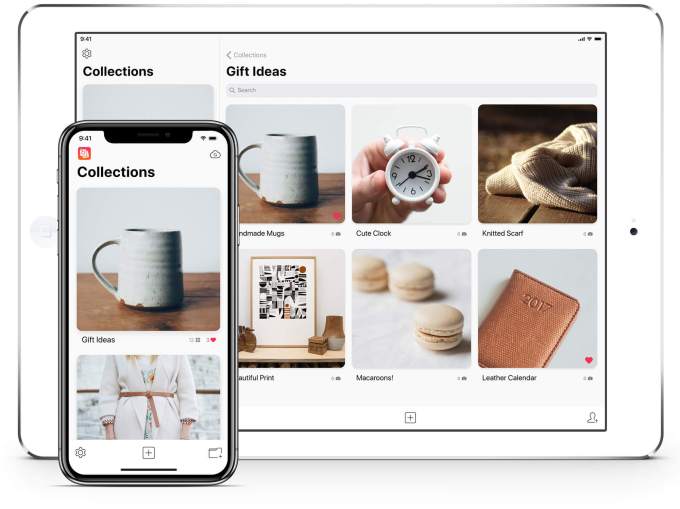 The app was designed by a team of two indie developers, Emile Bennett and Dave Roberts, based in Chamonix, France and Liverpool, U.K., respectively. Bennett had previously launched a budgeting app called Pennies, but built Collections because it’s something he wanted for himself.

“I often find myself in clothes shops just ‘window shopping’. I’ll find a shirt, or a pair of shoes, or yet another over-priced GoreTex outdoor jacket  – I’ve got a bit of a thing about them…I have too many! – and I think “yeah I like this, but I’m not going to buy it now, I’ll pick it up another time,'” he tells TechCrunch.

“So I’d take a few photos, the item, the tag, maybe me wearing it and also maybe the shop front so I remember where it is. I’d always think ‘it’s in my photo stream, I’ll remember it later.’ But, of course, that doesn’t happen as the photos just get lost down in your stream, and even if I did find and remember the photos, there’s no context around them,” he says.

He tried Evernote and Notes to keep tracking of these things, but found Evernote was too bloated and Notes was too text-centric. He also feels Pinterest is too focused on discovery and public sharing to be used for collecting your own private inspirations.

One of the best things about Collections, in my opinion, is that there’s no sign-up. Radical idea, right? Bennett is sick of it, too.

“I’m really passionate about not forcing people to sign up to my apps – I want your data to be yours, I don’t want you to have to sign up to a new service just to use this app,” he says. “I think we’re all getting a bit of ’sign-up fatigue’ these days. Most apps do it because it’s the way they make their money – they give you the app for free, make you sign up to use it, collect your data, and then use that data to make their money. That’s really against my ethos,” says Bennett.

Hey people, this is the kind of app development we should be encouraging.

Bennett gave me a few promo codes to try out the app with friends, but I forgot about that, and purchased it.

M77J6T7WLHWJ
N3X9APPT9THE
KNJMTXMY6FFJ
TRT4E77MTR4H
Promo codes are just free downloads. It’s not a scheme to make money, cynics. Nobody’s getting paid here. I just like this app and figured I’d share. Have a good weekend.