The initial report by the National Transportation Safety Board on the fatal self-driving Uber crash in March confirms that the car detected the pedestrian as early as 6 seconds before the crash, but did not slow or stop because its emergency braking systems were deliberately disabled.

Uber told the NTSB that “emergency braking maneuvers are not enabled while the vehicle is under computer control, to reduce the potential for erratic vehicle behavior,” in other words, to ensure a smooth ride. “The vehicle operator is relied on to intervene and take action. The system is not designed to alert the operator.” It’s not clear why the emergency braking capability even exists if it is disabled while the car is in operation. The Volvo model’s built-in safety systems — collision avoidance and emergency braking, among other things — are also disabled while in autonomous mode.

It appears that in an emergency situation like this this “self-driving car” is no better, or substantially worse, than many normal cars already on the road.

It’s hard to understand the logic of this decision. An emergency is exactly the situation when the self-driving car, and not the driver, should be taking action. Its long-range sensors can detect problems accurately from much farther away, while its 360-degree awareness and route planning allow it to make safe maneuvers that a human would not be able to do in time. Humans, even when their full attention is on the road, are not the best at catching these things; relying only on them in the most dire circumstances that require quick response times and precise maneuvering seems an incomprehensible and deeply irresponsible decision.

According to the NTSB report, the vehicle first registered Elaine Herzberg on lidar six seconds before the crash — at the speed it was traveling, that puts first contact at about 378 feet away. She was first identified as an unknown object, then a vehicle, then a bicycle, over the next few seconds (it isn’t stated when these classifications took place exactly). 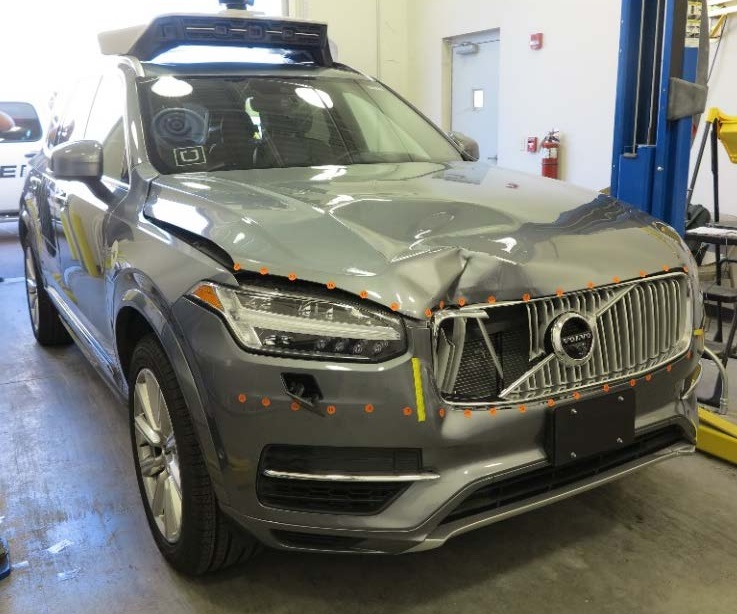 The car following the collision

During these six seconds, the driver could and should have been alerted of an anomalous object ahead on the left — whether it was a deer, a car or a bike, it was entering or could enter the road and should be attended to. But the system did not warn the driver and apparently had no way to.

Then, 1.3 seconds before impact, which is to say about 80 feet away, the Uber system decided that an emergency braking procedure would be necessary to avoid Herzberg. But it did not hit the brakes, as the emergency braking system had been disabled, nor did it warn the driver because, again, it couldn’t.

It was only when, less than a second before impact, the driver happened to look up from whatever it was she was doing and saw Herzberg, whom the car had known about in some way for five long seconds by then. It struck and killed her.

It reflects extremely poorly on Uber that it had disabled the car’s ability to respond in an emergency — though it was authorized to speed at night — and no method for the system to alert the driver should it detect something important. This isn’t just a safety issue, like going on the road with a sub-par lidar system or without checking the headlights — it’s a failure of judgement by Uber, and one that cost a person’s life.

Arizona, where the crash took place, barred Uber from further autonomous testing, and Uber yesterday ended its program in the state.

Uber offered the following statement on the report:

Over the course of the last two months, we’ve worked closely with the NTSB. As their investigation continues, we’ve initiated our own safety review of our self-driving vehicles program. We’ve also brought on former NTSB Chair Christopher Hart to advise us on our overall safety culture, and we look forward to sharing more on the changes we’ll make in the coming weeks.