InVision, the startup that wants to be the operating system for designers, today introduced its app store and asset store within InVision Studio. In short, InVision Studio users now have access to some of their most-used apps and services from right within the Studio design tool. Plus, those same users will be able to shop for icons, UX/UI components, typefaces and more from within Studio.

While Studio is still in its early days, InVision has compiled a solid list of initial app store partners, including Google, Salesforce, Slack, Getty, Atlassian, and more.

InVision first launched as a collaboration tool for designers, letting designers upload prototypes into the cloud so that other members of the organization could leave feedback before engineers set the design in stone. Since that launch in 2011, InVision has grown to 4 million users, capturing 80 percent of the Fortune 100, raising a total of $235 million in funding.

While collaboration is the bread and butter of InVision’s business, and the only revenue stream for the company, CEO and founder Clark Valberg feels that it isn’t enough to be complementary to the current design tool ecosystem. Which is why InVision launched Studio in late 2017, hoping to take on Adobe and Sketch head-on with its own design tool.

Studio differentiates itself by focusing on the designer’s real-life workflow, which often involves mocking up designs in one app, pulling assets from another, working on animations and transitions in another, and then stitching the whole thing together to share for collaboration across InVision Cloud. Studio aims to bring all those various services into a single product, and a critical piece of that mission is building out an app store and asset store with the services too sticky for InVision to rebuild from Scratch, such as Slack or Atlassian.

With the InVision app store, Studio users can search Getty from within their design and preview various Getty images without ever leaving the app. They can then share that design via Slack or send it off to engineers within Atlassian, or push it straight to UserTesting.com to get real-time feedback from real people. 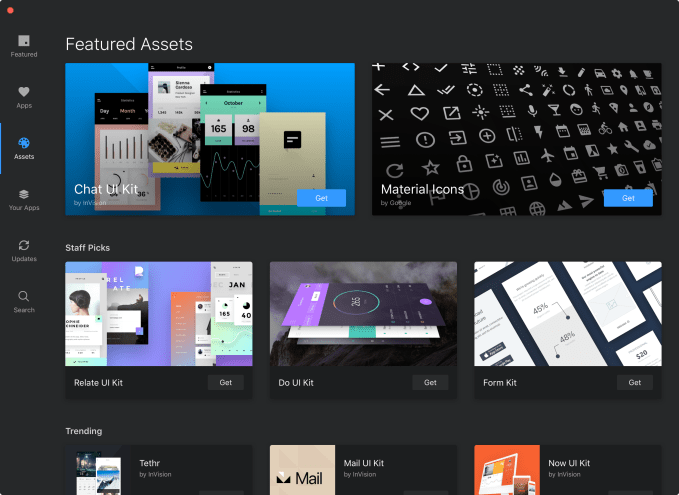 InVision Studio launched with the ability to upload an organization’s design system (type faces, icons, logos, and hex codes) directly into Studio, ensuring that designers have easy access to all the assets they need. Now InVision is taking that a step further with the launch of the asset store, letting designers sell their own assets to the greater designer ecosystem.

“Our next big move is to truly become the operating system for product design,” said Valberg. “We want to be to designers what Atlassian is for engineers, what Salesforce is to sales. We’ve worked to become a full-stack company, and now that we’re managing that entire stack it has liberated us from being complementary products to our competitors. We are now a standalone product in that respect.”

Since launching Studio, the service has grown to more than 250,000 users. The company says that Studio is still in Early Access, though it’s available to everyone here.