The San Francisco Municipal Transportation Agency has officially made available its permit application for electric scooters to operate in the city as part of a one-year pilot program. Part of that means companies like Bird, Lime and Spin will need to at least temporarily remove their scooters from city sidewalks while their applications are being processed.

Lime, Bird and Spin — all of which deployed their scooters in March without permission from the city — have until June 7 to submit their applications. At that time, the SFMTA will review all the applications and aim to let companies know if they qualify by the end of June.

As part of a new city law, which goes into effect June 4, scooter companies will not be allowed to operate their services in San Francisco without a permit. Given that the SFMTA won’t start reviewing applications until the 7th, that means scooter companies will need to remove their scooters from city sidewalks by June 4. If they don’t, each companies respective scooters will be at risk of impound and fines of up to $100 per scooter.

“San Francisco supports transportation innovation, but it cannot come at the price of public safety,” SF City Attorney Dennis Herrera wrote in a press release. “This permit program represents a thoughtful, coordinated and effective approach to ensure that San Francisco strikes the right balance. We can have innovation, but it must keep our sidewalks safe and accessible for all pedestrians. We can have convenience, but it can’t sacrifice privacy and equity along the way. This program is a strong step forward. It provides the framework to ensure that companies operating in the public right of way are doing so lawfully and are accountable for their products.” 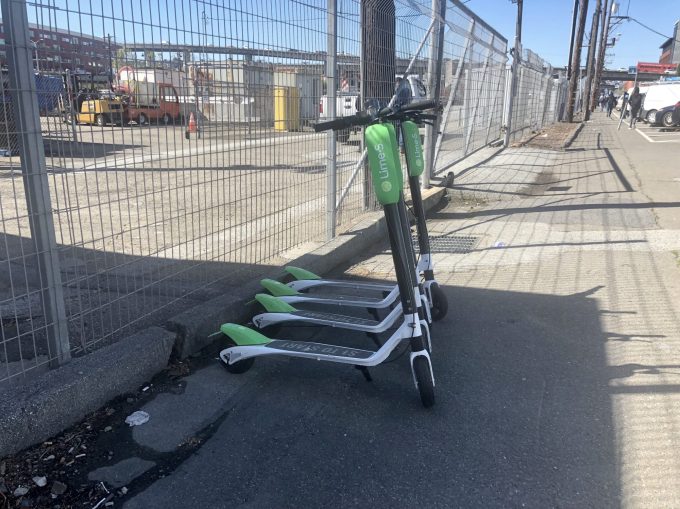 And if any company violates the law by operating electric scooters without a permit will automatically be denied a permit. The SFMTA’s application asks about things like scooter availability, proposed fleet sizes in disadvantaged communities, options for low-income people, processes for charging and deploying scooters, insurance and rider education. At a Board of Supervisors meetings in April some supervisors and members of the public expressed concerns around the lack of helmets and people riding on sidewalks. That’s where rider education would come in.

In order to submit an application, each company must make out a $5,000 check to the SFMTA to cover evaluation costs. If issued the permit, companies must then pay an annual permit fee of $25,000, as well as a $10,000 public property repair and maintenance endowment. Companies must also share trip data with the city.

Earlier this month, the city of San Francisco laid out its requirements for companies seeking to obtain electric scooter permits. The city will issue permits for no more than five companies during the 24-month pilot program. The program would grant up to 2,500 scooters to operate, but it’s not yet clear how many scooters each company would be allowed to deploy.

Since Bird, Lime and Spin deployed their scooters, a couple of other companies have signaled their interest in electric scooters. Lyft, for example, is looking to launch a service in San Francisco. And Uber also has its eyes on electric scooters. In April, Uber CEO Dara Khosrowshahi told me the company plans to “look at any and all options” that would help move transportation options in ways that are city-friendly. And just earlier today, a company called GOAT launched some electric scooters over in Austin.

#LimeNation San Francisco,We are excited to apply for a permit and will comply with the city’s request that all…