Tinder will now help you find matches with those people you may cross paths with in your day-to-day life. As promised earlier, the company today is announcing the launch of a new location-based feature that will narrow your list of potential dating prospects to those who hit up your same bar for after-work drinks, or who stop by your favorite coffee shop for their daily caffeine fix, or who work out at your same gym.

Yes, that’s right — you no longer have to say “hello” in real life — you can match first, then speak.

This is what it’s come to, friends. Even the “meet cute” story is now a dating app product.

The feature, known as Tinder Places, was previously spotted during beta tests.

Starting today, Tinder Places is formally being announced as a public beta test that’s underway in three cities: Sydney and Brisbane, Australia and Santiago, Chile. (It was being tested privately in these markets prior to now.) The plan is to collect user feedback from the public trials, and tweak the product before it launches to all users worldwide, the company says.

The idea of sharing your location with strangers, however, is a bit creepy — especially considering that Tinder users are not always respectful. But Tinder believes that the fact it’s showing you people you might actually run into in real life will actually prompt more civility in those initial chats.

“I do think that — and this is a personal hypothesis of mine — if you match with someone who you know goes to the same place as you, I think that will set a very different tone to the conversation than someone who is more or less anonymous as an online match on a dating platform,” says Samantha Stevens, director of Location Products at Tinder, who led the product’s development. 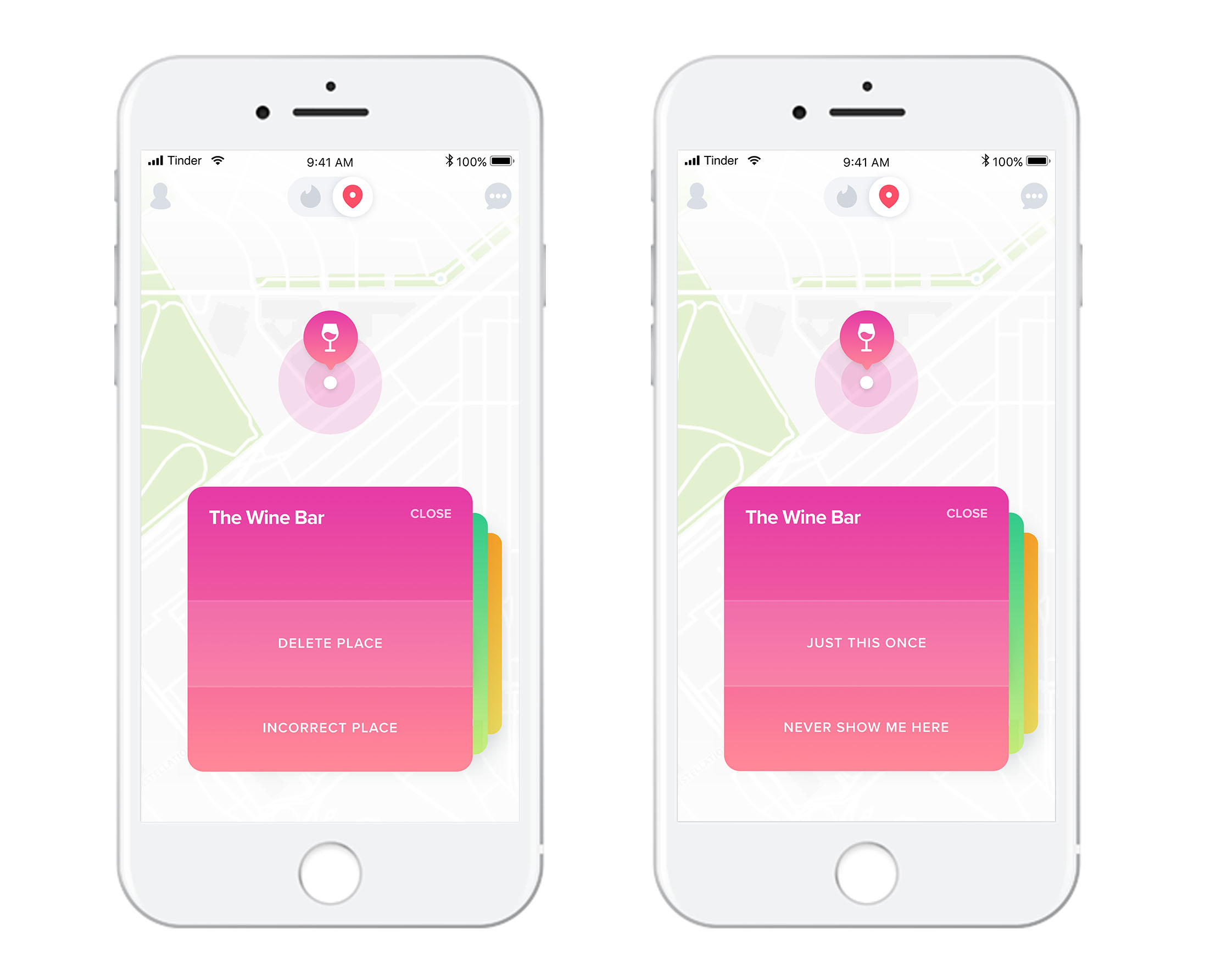 She says the larger idea here is to present users with potential matches who you already have things in common with, as reflected by the places you go.

“The places that you go say a lot about who you are as an individual, what you value, your hobbies, your interests,” she continues. “So being able to match with someone on Tinder who shares those same things with you, we believe creates a more genuine match and a better conversation.”

That said, not everyone would want strangers on a dating service to know where to find them.

But Stevens explains Places has a number of safeguards built-in to make users feel more comfortable, and to limit the feature’s ability to be used for stalking.

“As a female who designed this feature, I personally made sure that I would feel safe using it,” she says. 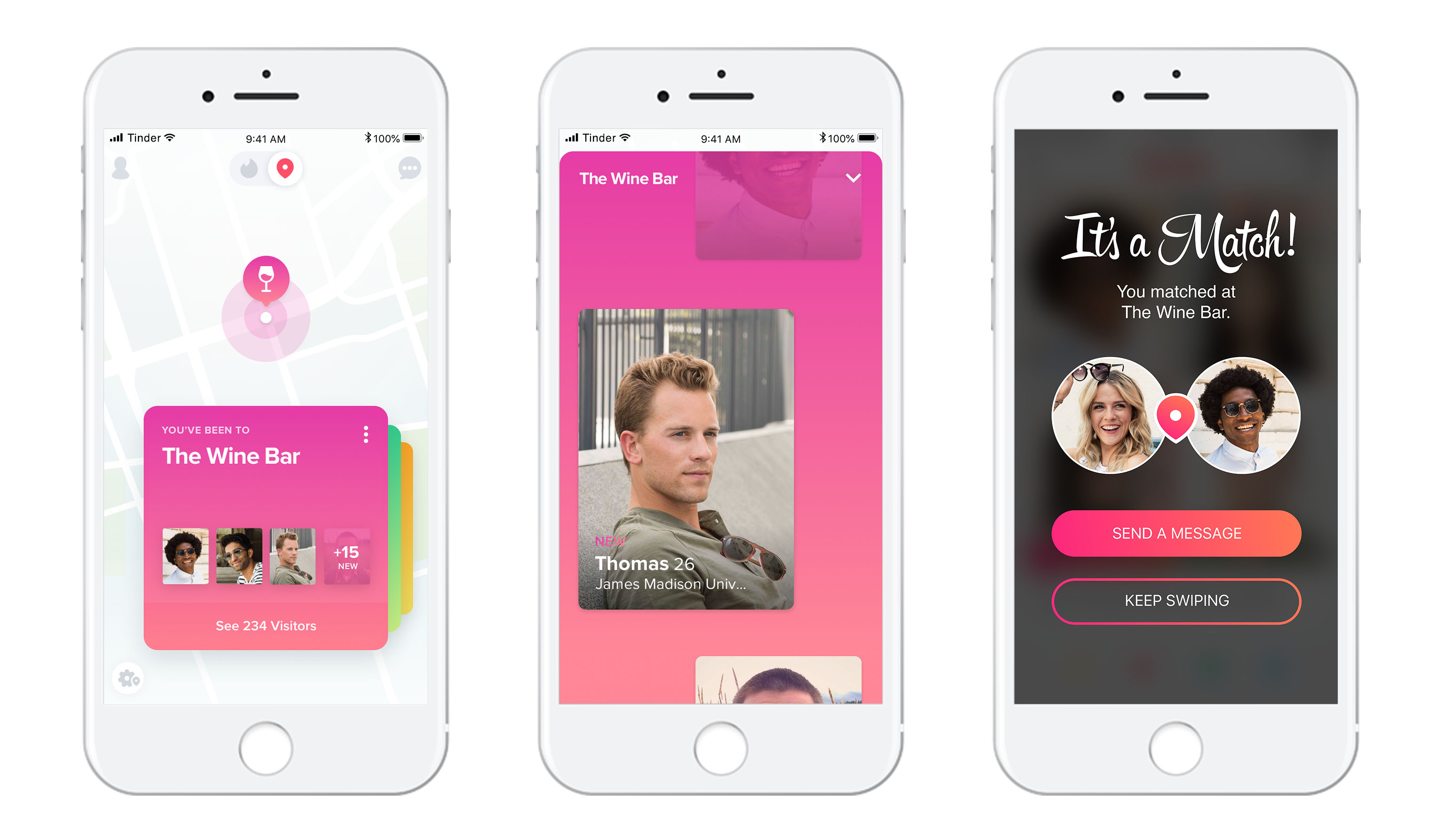 For starters, the feature is opt in, not opt out.

It leverages Mapbox and Foursquare’s Pilgrim SDK to identify and categorize places you go, and it only shares those places Foursquare deems “social.” (Foursquare is able to “wake up” Tinder’s app for background location, in case you’re wondering how this works). Tinder says it will not record places like your house, the office building where you work, banks, doctors’ offices and other venues that are either too personal or not relevant to matching. All this appears in a separate section of the Tinder app’s interface.

Plus, your place visits aren’t recorded to the app in real-time. Instead, Tinder waits until at least 30 minutes before a place shows up, or even longer. It randomizes the time before someone appears associated with a particular venue in order to limit others’ abilities to deduce people’s routines.

In addition, users who are participating in Places will get an alert when a new place is added, and can then choose to toggle that place off so it’s not shown right away. 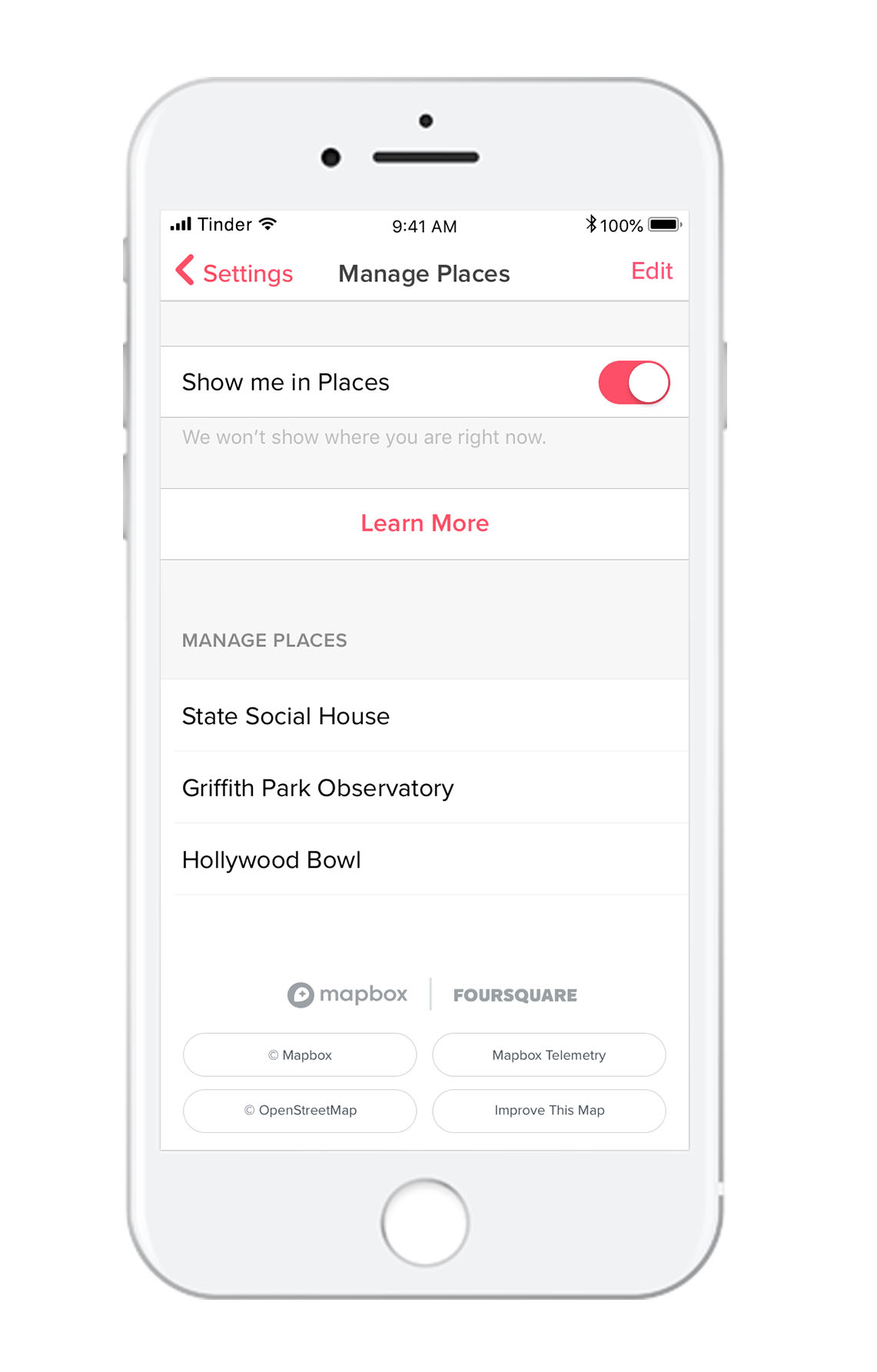 You also can tell Tinder to never show a particular place again after its first appearance. So, for example, if you never want to meet people at your gym when you’re all hot and sweaty, you can disable that place from ever appearing.

Your association with a place also deletes from the app after 28 days, not only as a privacy protection, but also because it helps keep data fresh, Stevens says. (After all, just because you went to that hip bar a year ago does not make you a person who goes to hip bars.)

Of course, a dedicated stalker could make a note of your favorite haunts and attempt to locate you in the real world, but this would require extra effort in terms of writing things down, and trying to determine your patterns. It wouldn’t be impossible to start making some connections, but it would require dedication to the task at hand.

Despite the safeguards, it’s unclear that the real-world benefit to users is significant enough to opt in to this additional data collection. While there are arguably use cases for matching with those you cross paths with, simply visiting the same coffee shop isn’t necessarily an indicator of a potential for a relationship. That comes down to a lot of other factors — including, most importantly, that unpredictable chemistry — something neither Tinder, nor any other dating app, can determine — and a set of shared values. At best, this “place data” is an icebreaker.

But for Tinder, location data on its users holds far more value.

The company has no plans to delete its own records of your jaunts around town. You can’t push a button to clear your data, for instance. If you want it gone, you’ll need to delete your Tinder user account entirely, we understand.

The company says users haven’t asked for this sort of functionality during tests. Rather, they’ve opted in to the feature in full force, with very few qualms about their personal data or its usage, it seems.

“In terms of opt-in rates — and we’ll see how this behaves as we go to a bigger population — but we’re at like 99 percent,” says Tinder CEO Elie Seidman, who moved over from Match Groups’s OKCupid’s top position to lead Tinder in January. “I don’t know that we’ll see that hold up on a broad population, but I think we could expect this is a 90-plus percent opt-in rate.”

That seems to contradict the shift in user sentiment around personal data collection in the wake of the Facebook-Cambridge Analytica scandal, which has led the world’s largest social network to rethink its practices, and potentially face regulation. The fallout has led to users becoming more cynical and wary of social apps asking them to share their data — and in the case of Tinder, where it’s about — well, frankly, romance and sex — one would think users would give “opting in” a bit more thought.

Seidman doesn’t believe there’s much for users to be concerned about, though. That’s because Tinder’s main business isn’t ads — it’s subscriptions to its premium service, he explains.

“We’re not using [personal data] to sell advertising,” the exec says. “If you think about the trade between our members and us — like, what do you get in exchange for the data? In one place, you get photos of kids, right? And obviously, a lot of ads. And in the other place, you get connected to the most important part of your life. So I think it’s a very different thing,” Seidman says.

One could argue that “photos of kids” — meaning your family, your friends and their family, and generally, those broader connections you have through social networks — are at least equally important to your romantic relationships, if not more valuable. (Especially if you’re just using Tinder for hook-ups). 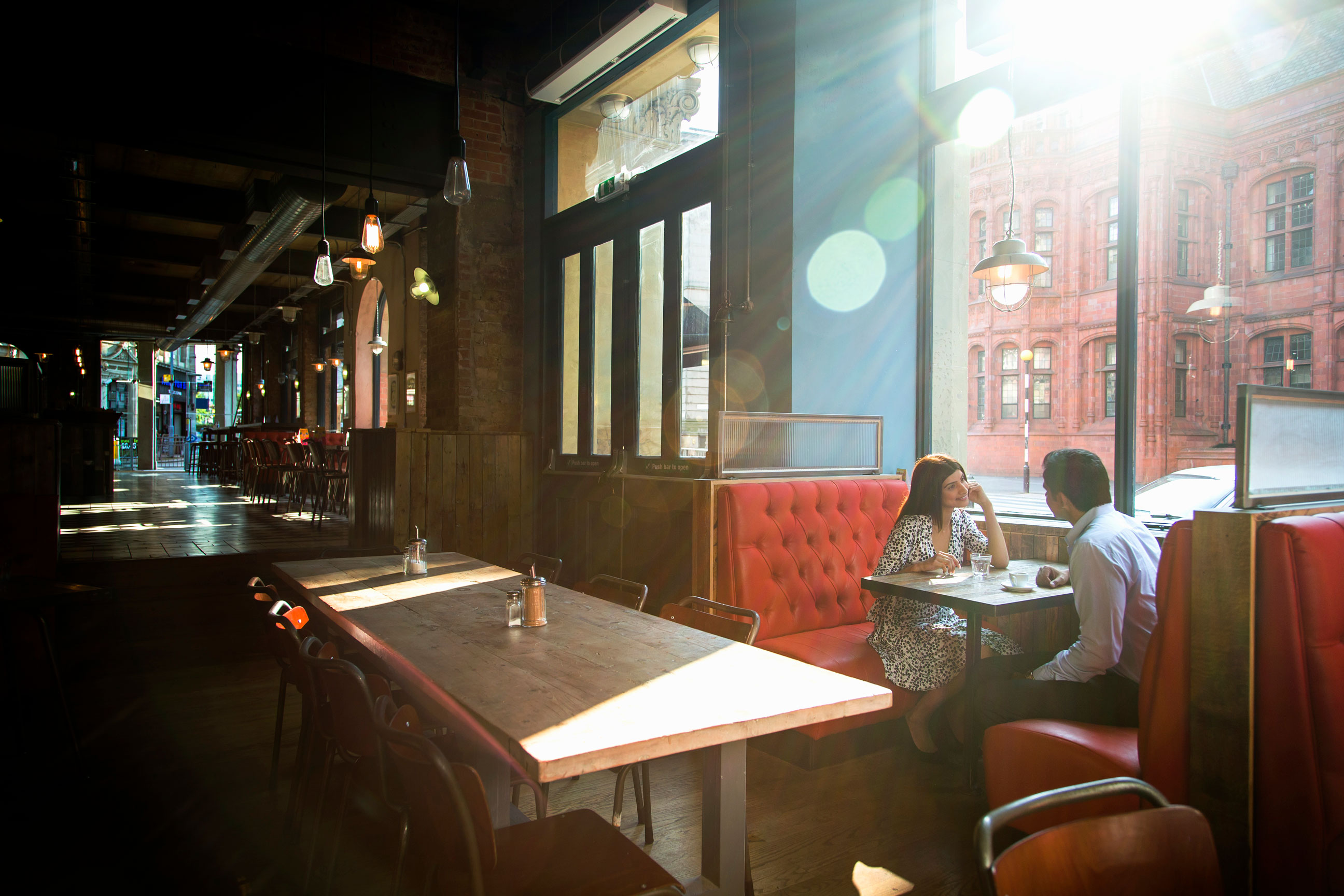 Tinder claims that it’s not using the location data to target users with its in-app ads, but that doesn’t mean the option is off the table forever. Having a massive trove of location data on users could be an advantage there, as well as a way to improve its algorithm, and even potentially to help it expand into real-world events — something Stevens didn’t rule out, saying if that was something a large number of users demanded, Tinder may consider it.

Meanwhile, a better matching algorithm would be a significant competitive advantage for Tinder, which is today fending off other newcomers, too, not just the desktop web-era dating sites. It’s embroiled in back-and-forth lawsuits with top rival Bumble, for example, and even itself is adopting Bumble’s “women speak first” feature. Given that the industry at large has stolen the swipe to match mechanism Tinder popularized, that seems fair enough.

“This is the first time, on an experience before people match, where we’ve changed — in a really fundamental way — the user interface. Of course, it feels very much like Tinder,” he says. “There’s a large body of work here and the team has worked for quarters to do this. It’s a product that inherently works better with scale. We’re drawing a smaller circle around the universe,” Seidman adds. “You need Tinder’s level of scale to make this work.”

Tinder officially claims “tens of millions” of users worldwide, with estimates putting that figure at more than 50 million.

The company hasn’t provided a time-table as to when location-based dating will roll out worldwide.