Facebook’s Groups are one of the social network’s most popular products, with more than 1.4 billion monthly users across tens of millions of active groups. Today, the company is rolling out a series of new features aimed at those who create and manage these groups, including customer support with answers and help provided by a real person, not a machine or automated responses. Admins are also getting a dedicated online education portal and more tools to manage their groups’ posts.

Unfortunately, the customer support service is not available to all groups at this time.

Facebook instead is beginning a pilot program for admin support that’s only available to a limited number of group admins on iOS and Android at this time, initially in English and Spanish.

“We spend a lot of time speaking with admins, and we listen to their feedback quite a lot,” explains Alex Deve, Product Management Director for Groups. “And the first thing we heard from them – very loud and clear – is that they want to be able to reach out to us and get a very quick response,” he says.

The free service will allow admins to send any issues they have to Facebook, and the company will respond within one business day. This is made possible by the additional hires the company made to expand its moderation team, as CEO Mark Zuckerberg had previously announced, Deve notes.

The idea with the admin support isn’t just about helping admins out directly – it’s also about figuring out what their needs are, what troubles they have, and what features they want. This will help Facebook roll out new features for admins that they’ll find useful, but it also ties into another new product being announced today: an online educational center for admins.

At facebook.com/community, Facebook has collected best practices, tutorials, product demos, and case studies based on the experiences and expertise from the admin community, and is sharing it with others in the form of audio and video content. There are tips on things like growing groups, setting the rules, building a team, using group tools, managing conflicts, and more. 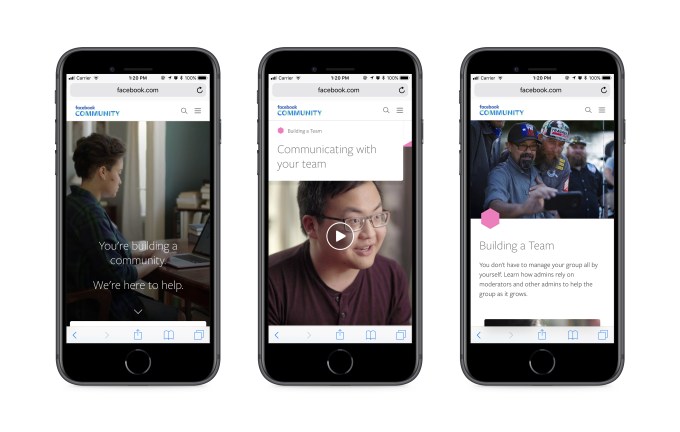 “Going forward, the support work is going to feed into this. [Facebook will learn] what other themes are very common that people want to hear about from other admins. So we’ll create more videos in the future,” says Deve.

The other new feature, “pre-approved members,” will allow admins and moderators to select members whose content will automatically be approved whenever they post. This will save admins time by not having to moderate content from trusted people. 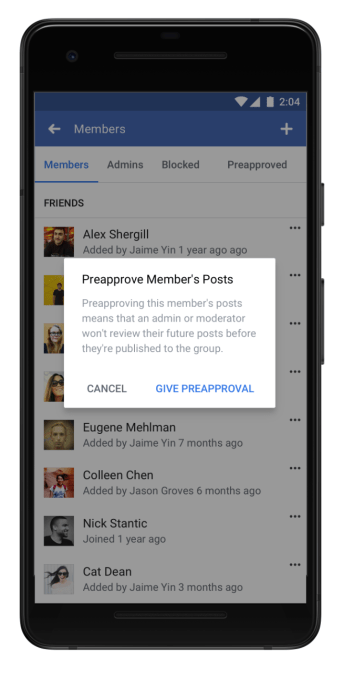 Groups have been a particular interest for Facebook in recent months, especially as the trend towards private networking and sharing continues to grow. At the company’s F8 Developer Conference in May, Facebook announced other features that will make Groups a more prominent part of the Facebook experience, as a result. This includes a new tab for Groups, where your groups are better organized and you can find others to join – similar to Facebook’s now-defunct standalone Groups app. And it introduced a new Groups plugin that admins could use on their websites or emails to solicit people to join their group. 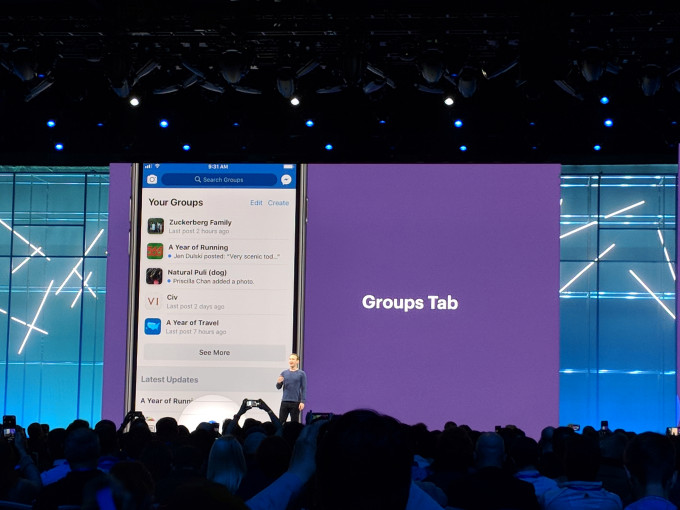 All the new Groups features are rolling out starting today to about 20 percent of supported users, and will continue to roll out to the rest of the world in the weeks ahead. The online educational portal is live now in English, but will launch in Spanish in June.