Earlier this year, Pandora announced its plans to challenge Spotify by taking aim at one of its rival’s top features: personalized playlists. Pandora in March began rolling out dozens of variations of personalized playlists, including those spanning moods, activities, and genres – all powered by its music database, the Music Genome. Today, Pandora says the rollout has completed and all its Premium users will now have access to these new playlists.

The feature is meant to offer Pandora’s free users a reason to upgrade to its top-tier paid offering, Pandora Premium. This $9.99 per month service offers on-demand listening, playlist creation, downloads for offline listening, unlimited skips and replays, higher-quality audio and no advertisements. 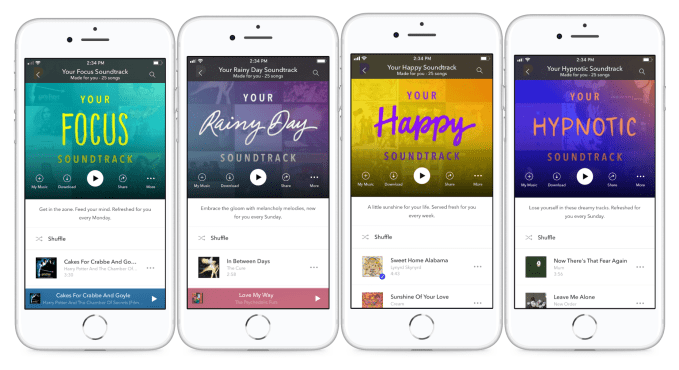 Premium users can share their personalized playlists with friends, even if they’re on the free tier, by sending a link.

The free user can temporarily access Premium by watching a video ad as a way to test drive the Premium experience, and listen to their friend’s playlist. This option, called “Access,” launched in December and has been used by millions.

The company declined to comment on how well this “test drive” strategy has been working to convert free users to paid, saying that it’s not sharing metrics and engagement numbers around personalized playlists as the feature hadn’t yet been broadly rolled out. (Only a “select” number had access to the playlists ahead of today).

The playlists themselves are created by a combination of data from Pandora’s Music Genome and machine learning models that understand what sort of music you like. But Pandora also employs human curators to perfect the lists and update them, as needed.

At launch, the service was capable of offering over 60 personalized playlists, like those for “focus,” “energy,” “rainy days” or genre-based ones, like “pop” or “hip hop.” But users won’t necessarily get all 60 – they’ll only get those that Pandora thinks makes sense for the individual based on the user’s listening habits.

Pandora says that, during this staged rollout phase, it was creating up to four new playlists for each user per week, and this process would continue until it “maxed out” each user’s playlist categories. This “max” is not a flat number, but varies by user. For example, someone who listens to a lot of different types of music may continue getting new playlists for weeks.

Now that the feature is live, Pandora plans to release more categories, including new soundtrack themes, in the months ahead.

“This is the beginning of a whole suite of themed playlists that we will automatically build and tailor to each Premium user. In the coming months, we’ll be rolling out more even more themes for you to unlock,” writes Chris Phillips, Pandora CPO, in a blog post announcing the news.

To find the new playlists, visit the “Featured Playlists” section of “Browse” in the Pandora mobile app.