In the trailer for Solo, Chewbacca dangles for dear life from a high speed train barreling through a snowy landscape. “Chewie!” the young Han shouts, as the Wookiee’s head comes within spitting distance of a rocky mountainside, moments before everything goes black.

For those with even a passing familiarity with the Star Wars universe, it’s about as low stakes as cliffhangers get. Chewbacca will be fine. He’s made it to 190, and by all accounts, he survives well into the sequel trilogy, several cinematic decades later. It’s a bit silly, as far as these things go, but it also just might be the perfect setup for the film.

Solo is, by its very nature, low stakes. The fate of the galaxy is never at play, nor are the destinies of any of its familiar faces. In many ways, it’s a slight film, so far as the grandiosity of epic space operas are concerned, and for the most part, its filmmakers seem perfectly content to operate within those parameters.

Fans of the franchise were understandably skeptical in the lead up to release. It never bodes particularly well when a film’s directors are fired so late in the game. And while we may never get a straight answer as to why Chris Miller and Phil Lord were unceremoniously dumped by Disney toward the end of filming, rest assured that the unamicable parting of ways between the two sides is never peeks through the film’s shiny veneer.

If you should ever find yourself in charge of a major film studio, looking to deliver the latest entry in the world’s premier film franchise on time and in one piece, you can do a heck of a lot worse than Ron Howard. The man behind Apollo 13 and those Dan Brown movies is Hollywood’s leading auteur when it comes to delivering a film right down the middle of the road.

However you might have ultimately felt about The Last Jedi, the movie was downright giddy in its attempts to subvert the series’ tropes. Solo, on the other hand, revels in them — at least as much as a film can that isn’t directly tied to the Skywalker saga and the never-ending tug of war between Jedi and Sith.

Like The Phantom Menace before it, the anthology entry is downright obsessed with tracing the origins of every available nook and cranny of the original trilogy. But where the prequels had a much larger mythology to explore, Han’s story is decidedly more narrow. As such, the film is content to offer the origins of elements you almost certainly never wondered about.

Why, for example, does Solo call Chewbacca “Chewie?” Or how about the fact that Lando pronounces “Han” differently that practically everyone else in the series? All of these questions, and more, are answered. If Solo winked at the camera any more, it would be flying with its eyes closed.

But Howard and a capable cast weave those elements into a largely enjoyable experience. In an era of blockbusters with ensemble casts 100 actors deep, Solo feels lean. It’s one part western and one part heist film, never requiring you to think too hard, instead just letting the film wash over you. In those moments when planned courses of action do get complex, however, never fear — there’s bound to be someone on screen explaining their plan.

Alden Ehrenreich is capable in the unenviable role of filling Harrison Ford’s massive shoes. Like the film itself, the actor plays it down the middle. He’s charming, but not overly so, and while Solo falls into some of the Episode I traps of excessive exposition, his Han is almost instantly more fleshed out than the young Anakin. From the opening scenes, which play like a cross between Oliver Twist and Blade Runner, it’s clear that Han Solo came into this world fully formed. 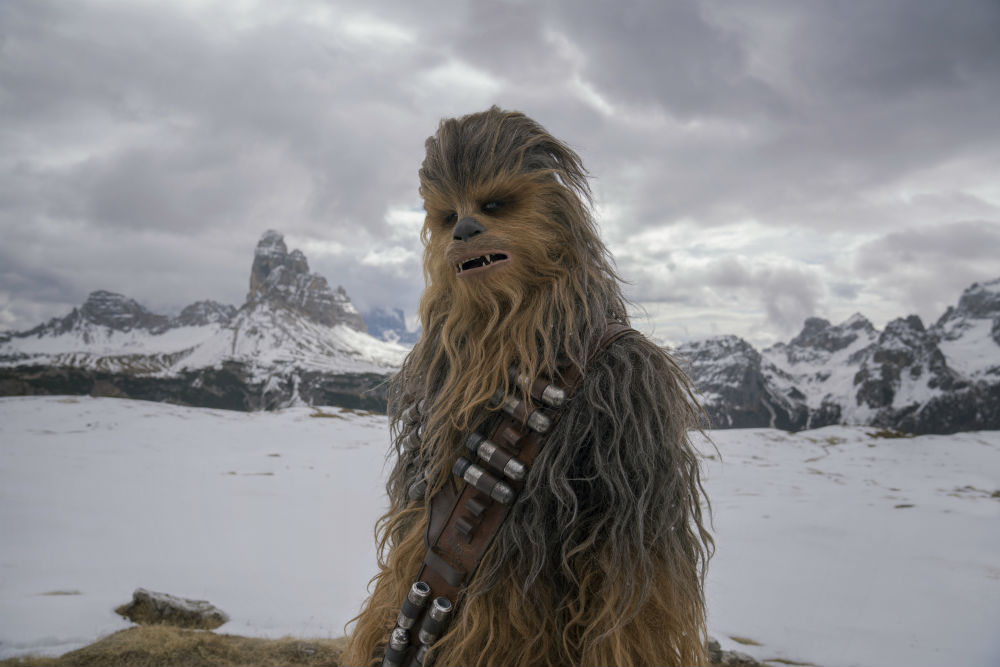 Donald Glover, for his part, clearly revels in the role of Lando Calrissian — a character like Solo himself, that is seemingly inextricable from its originating actor. But there’s a overwhelming joy in watching him inhabit the role it seems he’s been waiting his entire life to play — a force of chaotic-good cloaked in a velvet cape and goatee.

Phoebe Waller-Bridge’s L3-37, however, is undoubtedly the film’s breakout character. The bipedal droid presents a moral center of a kind in a film without otherwise populated by ethically ambiguous characters. A strong-willed crusader for robotic rights, L3-37 is easily the film’s most entertaining addition to the canon, as well as a sly thumb in the eye of fanboys who have turned their backs on a more inclusive Star Wars universe.

Droid aside, however, those concerned that the most recent films has strayed too far from the films of their youth will find plenty to like in Solo. It’s a perfectly middle of the road adventure that’s unlikely to end up at either the top or bottom of anyone’s list of Star Wars films.

To paraphrase Han, “I’ve got a perfectly okay feeling about this.”