A new coalition of activist groups led by Yelp and TripAdvisor are renewing the fight to get Google to give a fair opportunity to all sites instead of putting its Knowledge Cards atop the results for subjective search queries. The alliance that includes Fight For The Future and Consumer Watchdog.org has assembled tens of thousands of dollars to run targeted ads on Facebook, Instagram and Twitter “calling for Google employees to introspect and examine how Google’s One Boxes or Answer Boxes are harming the open internet,” says the project’s leader Luther Lowe, Yelp’s VP of public policy.

The initiative is certainly self-serving, as Yelp and TripAdvisor have the most to lose from Google’s own local results getting to sidestep the PageRank algorithm and be shown atop search results pages before their own sites. But it’s a fair question to ask why Google’s dominance in search should let it deviate from a fair process of choosing the best result to give its content a boost.

Yelp initially launched its “FocusOnTheUser.eu” campaign targeting Google+ in 2014 as the European Union was determining whether Google abused its power to preference its shopping results. That eventually led to a €2.4 billion anti-trust fine. Yelp has now filed a complaint with the EU that extends those concerns to how it treats local business results, which Lowe said is now the biggest category of search. The campaign was timed to come alongside this week’s 60 Minutes report examining whether Google is a monopoly.

The new Focus On The User that launched today concentrates on swaying Google’s employees rather than regulators, and includes new partners like DemandProgress and American Family Voices. We’ve contacted Google requesting a statement in response to the campaign and will update if we hear back.

The coalition’s two stated goals are to get Google to:

1. Match users with the best possible information at the top of results. For local search (the most common category of search), this means creating an interoperable box and ranking Google’s content alongside other business listing pages across the web. An organic, merit-based process should pin the most relevant businesses from the web to the map. That box should provide a clear path to the source content, not a small link designed to generate a low CTR.

2. For other forms of answers (Wikipedia-powered information, recipes, etc.) rather than offering small links designed to generate low CTR, answer boxes should encourage users to leave Google.com and visit the source content for themselves. The box itself should be a clear path to the web-based information powering the box.

Essentially, the groups want Google’s results to compete with everyone elses, and for it to more prominently cite and prioritize driving more traffic to sources of info for its Knowledge Cards. The coalition’s hope is that if Google has to deal with internal complaints or risks losing talent over the issue, it might redesign search results to be a more even playing field.

“Google does not include its own content it its own index. It robots.txts itself” Lowe explains. “Why? Because it doesn’t have to be indexed because it doesn’t compete on a level playing field alongside other local search services and has rigged the most common form of search (local is 40%) in its favor.” 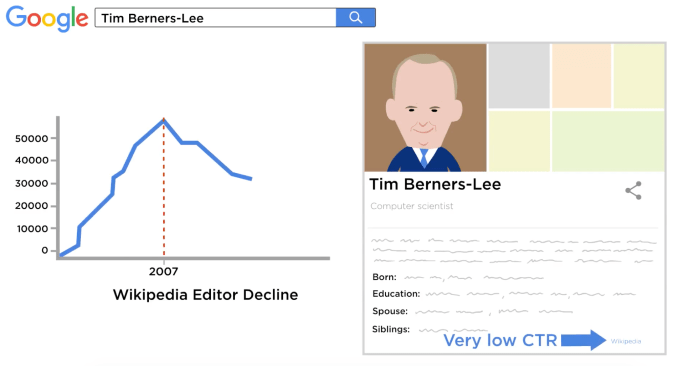 While it makes perfect sense for Google to simply spit back answers instead of results for immutable facts, like math equations or sports scores, it’s reasonable to expect subjective content to have to compete in the algorithm. If TripAdvisor has far more reviews for a restaurant and therefore a likely more accurate answer to whether you should eat there, it doesn’t make sense for a Google business profile based on far fewer reviews to appear first in the results.

Google has seen a sudden surge in backlash after downplaying the “don’t be evil” line in its mission statement and its Duplex demo worried people about how the company could use its new human-voiced artificial intelligence technology. This campaign could stoke that discontent. But because it comes from Google’s direct competitors like Yelp and TripAdvisor, employees may be able to write off the initiative as purely opportunistic. Unless the U.S. government gets serious about anti-trust regulation or Google’s employees cry out en masse, it may just ride out the campaign doing business as usual.