In April, YouTube TV confirmed rumors it was expanding its service by way of digital-only networks by launching two news channels from Cheddar. The streaming service was also expected to roll out channels from Tastemade and The Young Turks soon, reports said — something YouTube TV hoped would differentiate its service from the now numerous live TV streaming rivals, while leveraging the power of big-name online brands to attract new subscribers.

On Thursday, YouTube TV alerted customers by way of email it had added new channels Tastemade and TYT, along with Cheddar and Cheddar Big News, which arrived earlier. 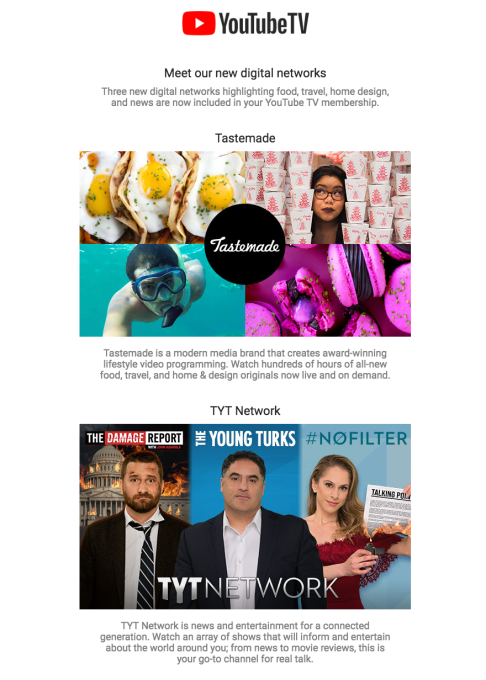 The company also confirmed the news in an interview with Variety, where the company explained how it saw this as the first step toward YouTube TV fulfilling its original promise of delivering a streaming service that combined traditional TV content with that from YouTube publishers.

Those efforts will continue, as YouTube TV says it’s in talks now with other partners to carry their digital media content on its network, too.

One challenge for YouTube TV in going about these new deals involves getting the publishers to craft unique content for its service — otherwise, the service could even blur the lines too much between YouTube proper, where some of the digital content may currently reside, and its paid, subscription-based TV service.

In Tastemade and TYT’s case, the publishers committed to producing original shows for YouTube TV, equating to several hundred hours of programming for subscribers, Variety noted. That’s 10 new series from Tastemade this year, and four from TYT Network at launch, with more to follow in 2018.

For the networks themselves, the deal allows them to reach new viewers who may have before only had minimal or no exposure to their content. And for Tastemade in particular, the channel will benefit from YouTube TV’s lack of food and travel channels — the service doesn’t carry Scripps/Discovery networks, which produce a lot of this type of content.

Despite the advantages with YouTube TV distribution, these digital publishers are by no means putting all their eggs in one basket — they expect to do similar deals with other over-the-top services. The Young Turks even just launched its own iOS app, following its $20 million raise last summer.