Oh my god, someone’s doing Blippy again. If you’ve been around the internet as long as I have (too long), you’ll probably remember the meteoric rise of the social network for sharing your purchases, Blippy, which was hyped up to a $46.2 million valuation back in 2010 before the world realized that almost nobody wanted a dedicated network for sharing and viewing each others’ purchases. Well, guess what? Someone’s trying a Blippy-like thing again — this time, in the form of a new app called Vota, which automatically records your credit card purchases and the places you visit so you can share them with friends or family, or view them privately for your own reference.

As a byproduct of this data collection, you may spot credit card fraud or other errant charges, too, or just get a handle on your spending.

But why revisit this concept now, when it failed before?

Well, there’s the argument that some startups are just “too early,” or that they could have succeeded if they had done X instead of Y. That’s coming into play here, a bit.

Plus, the younger generation is a little more comfortable with sharing financial data, as evidenced by the popularity of Venmo, where a feed shows your friends’ payments for seemingly no other reason beyond the fact that someone had to the idea to“make payments social.” (I mean, really — does anyone actually browse their Venmo feed for recommendations?)

Venmo, however, is largely a utility, and a useful one at that. It lets you pay back a friend when you’re splitting the check, the cab fare or anything else, as well as quickly move money back to and from bank accounts.

Vota, on the other hand, is like turning your credit card transactions into check-ins.

Thankfully, it’s not publicizing them for the world to see, nor is it sharing dollar amounts, as Blippy had done.

The concept for Vota comes from Kiyo Kubo and Nick Farina, the founders of Meridian — a location-based technology company acquired by Aruba Networks five years ago, which then became a part of HP.

The two left HP in 2016 with the goal of building something meaningful.

“One of the things that we came across [was that] nobody knows anything about personal finance, and so we thought, ‘well, maybe we can help with that,'” explains Kubo. 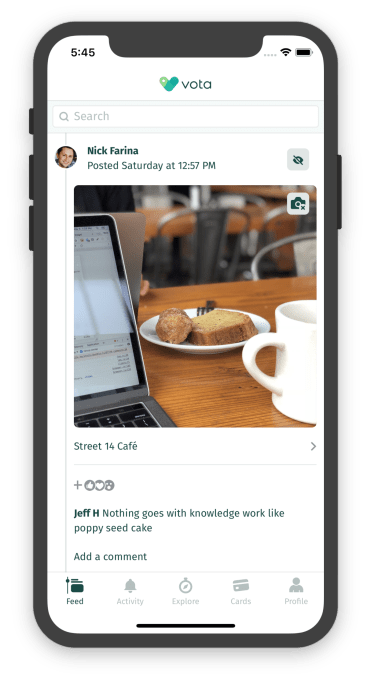 The app lets you connect your bank cards from Chase, Capital One, Wells Fargo, US Bank, Citi and other Visa cards, to get an easy-to-read feed of what and where you’re spending — information you can opt to share with individual friends or family members. And because it pulls in data in real time, Vota can help you quickly spot fraud.

But Kubo admits that, in its current form, Vota could be a hard sell.

“The very first thing we learned was that people are not comfortable sharing their finances,” he says.

That’s why the app removes the dollar amount, makes sharing opt in and allows you to selectively show or hide individual purchases. It also won’t share some transactions, like online purchases.

But that may not be enough. 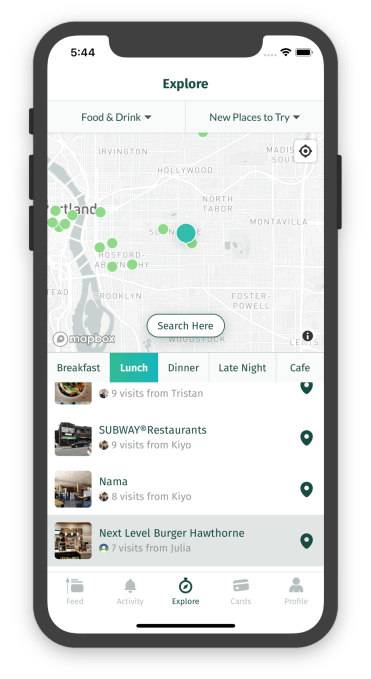 There is, arguably, value in seeing a cleaned-up, pretty feed of users’ check-ins. Foursquare’s Swarm does this with some success, for example, as it’s a way of keeping up with friends, and learning about cool places to visit in a sort of indirect way.

But linking a credit card and automating the process will likely give users pause, especially at a time when our personal data has been slurped up repeatedly for unscrupulous reasons. To get regular folks to try an app like this, they’ll need a better reason than it being a “useful journal of transactions” or a way to explore what friends are doing.

The company is considering those other paths. In fact, Kubo says the original idea was to develop a personal finance insights app, but user behavior during the beta led them to focus more heavily on the social portion.

It’s a case of following the data instead of your gut.

However, Vota aims to roll out other features that could broaden its appeal. For example, it may work on features to help people find ways to save — like by highlighting subscriptions you forgot about; or it may automate expense reports for businesses.

The goal is to roll out a set of premium features like this, rather than use the data to target you with ads or offers to monetize Vota (which is bootstrapped and not making money today).

An app that shows me all the iTunes subscriptions I forgot about, or helps me to cancel HBO NOW when Game of Thrones ends would be handy — especially if it also alerted me to suspicious transitions and fraud, while helping me budget and track trends. Selective private sharing could also be useful for spouses or partners who are pooling their finances, or need a way to coordinate their spending.

But much of what could make Vota interesting or mainstream-friendly isn’t built yet. And that makes Vota’s launch feel a little early, too.

Vota is a free download on iOS and Android.