This evening, Boring Company executives Elon Musk and Steve Davis offered a few more details about their plans to revolutionize LA urban transit, introducing the “Loop,” which would eventually be composed of all-electric pods that transport up to 16 passengers at a time. Musk theorizes that the Loop could take Los Angeles residents from downtown LA to any terminal at the LAX airport within 8 minutes for about $1. 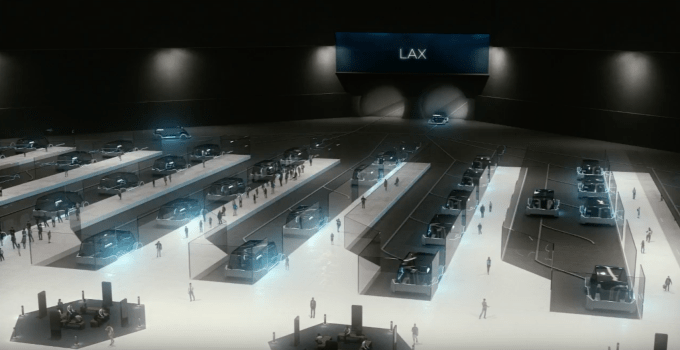 Much of the focus of the presentation was to assure the public that the Boring Company’s efforts would not be disruptive to the public or heavily stress the city’s existing highway systems. While the company has been best known for its hat and flamethrower sales, its most daunting challenge is courting public opinion for its plans to upgrade LA’s transport infrastructure.

The odd little presentation held at an LA synagogue started about 25 minutes behind schedule after a late arrival from Elon Musk who ironically said he got stuck in traffic. Musk offered a few minutes of eccentric discussion about why flying cars couldn’t solve the problem of “soul-destroying traffic.” Tunnels, on the other hand, Musk detailed were “way less nerve-racking than flying cars” and still “so fun.”

Alongside the execs onstage was Boring Company “mascot” Gary the snail. 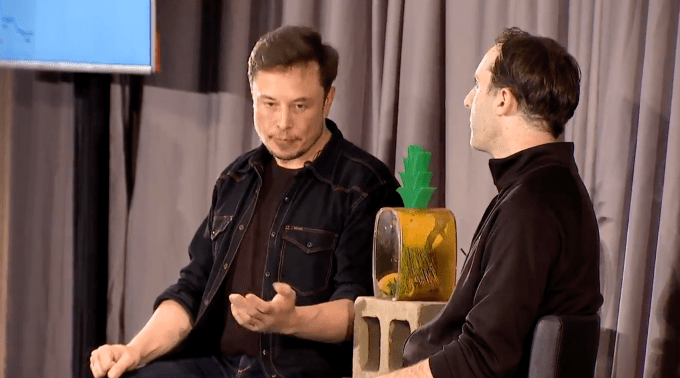 Musk said that Boring Company Loop’s vision of the future would be much more congruous with city life than subways, and that while it was very difficult to weave large stations into a city, building many more parking spot-sized stations could theoretically be much more effective. Musk also noted that he hoped the Loop would supplement existing transport systems and connect public transport lines.

To get moving towards this “Loop” vision, the company will begin with a 2.7 mile test tunnel on private property with private funds. Just last month, SEC documents were filed detailing that Musk’s Boring Company had raised just shy of $113 million.

Once the test site has been completed, Musk suggested they would begin offering free rides, which he hoped the company could make as fun as a Disney theme park, joking that guests could “bring [their] flamethrowers.” 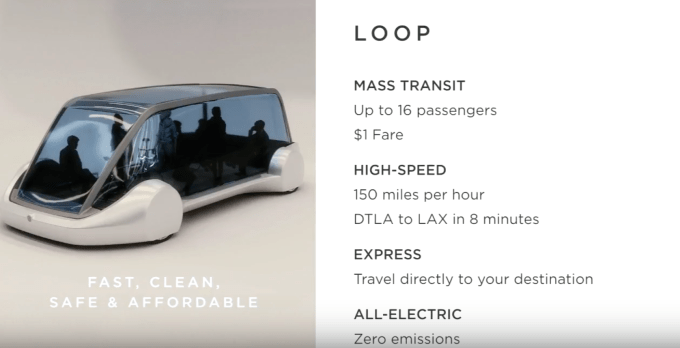 As Musk has previously noted, the Boring Company’s focus will prioritize pedestrian traffic rather than pods that house vehicles. While the executives were sure to distinguish the difference between the “Loop” and the Hyperloop, Musk also theorized that the two systems could eventually be seamlessly connected so riders could travel within the city and between cities with minimal friction.

Musk was notably asked during a Q&A about whether the Boring Company would do a full environmental impact report. He noted that they would, but given the length of the process would do so once moving toward a larger-scale project rather than on one of the test tunnels.

It’s clear from the presentation that things are very much in their early stages, but Musk and Davis seemed to do a good job assuring the public that they would be moving with the bureaucracy on this project rather than trying to push their vision forward quickly and recklessly.