Sometimes two companies get along so well together and fit each other so perfectly, they almost have to come together. That’s what happened when Dialpad, a business communications platform whose products include UberConference, started working with TalkIQ. They liked them so much, they bought the company.

Dialpad CEO Craig Walker says the two companies actually started working together about 8 months ago when Dialpad began looking at artificial intelligence options and they found that most weren’t real time and were expensive.

Walker liked the fact that TalkIQ had that near real-time solution and that it was also built on the Google Cloud Platform like his company. In addition, the principals from both companies each came out of Google and had actually worked together at various points.

When the teams came together under that commercial agreement, Walker says, they really clicked. At some point, they began talking about making it a permanent arrangement.

TalkIQ CEO Dan O’Connell says there was natural synergy they both recognized right away. “All acquisitions have challenges and opportunities. For me making a decision [to sell] was a pretty easy decision. We knew each other and with culture sometimes you don’t know what you are getting. Our values aligned really well,” he said.

With TalkIQ, the Dialpad platform gets an injection of intelligence. Specifically, they can capture voice in near real time and apply sentiment analysis and analytics. This could provide a customer service operation with feedback in real time along with advice for managers when to intervene in a call. 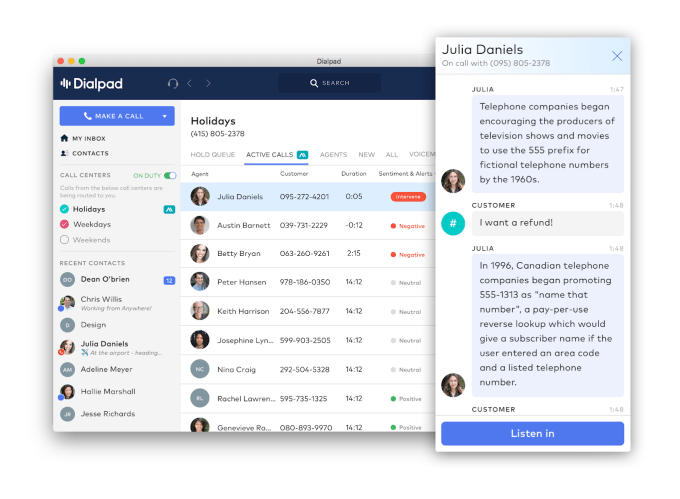 Call is being analyzed in real time and the manager can see the intervene recommendation. Photo: Dialpad

The TalkIQ functionality will be incorporated natively right into the Dialpad suite of apps, which includes voice and video along with customer service call center management and UberConference for conference calling. “Part of why we wanted to go all the way and acquire this technology was that we wanted it to be seamless and integrated and simple and not weird for end users,” Walker said.

To that end, the initial offering called VoiceAI will include real-time transcription along with smart notes, which automatically pick out the salient points in a meeting or call. It also comes with the real-time sentiment analysis and coaching for call centers.

Starting today, customers will be offered the opportunity to opt in on the new functionality and can use it for free during the Beta period. They will begin charging for it in July, but are still working out exactly how that will work. It could come with a certain amount of the AI-fueled functionality for free and then higher paid tier for more advanced functions.

The deal closed a few weeks ago and TalkIQ’s 29 employees are already part of the company with the San Francisco-based employees moving into the Dialpad headquarters. The TalkIQ engineering team will continue to work out an office in Waterloo, Ontario.