TiVo’s DVRs are getting Alexa support. The company is announcing its lineup of DVRs, including Series 4 (Premiere), 5 (Roamio), and 6 (Bolt) boxes like TiVo BOLT VOX introduced last fall, will be gaining support for Amazon’s virtual assistant, Alexa. The assistant will be able to do things like change the channel, skip commercials, jump back or forward, launch apps like Netflix, and more, says TiVo.

The company is not the only third-party DVR maker to have added support for Alexa.

Thanks to developer tools like the Video Skill API, other cable and satellite TV companies, streaming services, and content providers can now add voice control to their devices and apps, as well. For example, Dish last fall became the first U.S. pay TV provider to integrate with Alexa for hands-free TV. Others working with Amazon include DirecTV and TechCrunch’s parent (by way of Oath), Verizon.

Amazon’s Video Skill API was updated in March to include support for DVR recording, allowing users to set and manage their DVR recordings via their voice – that’s something TiVo, presumably, will add at a later date, as it’s not live yet. At the time of Amazon’s announcement, it had also said TiVo was one of the companies developing experiences using the Video Skill API.

In addition, TiVo itself had announced plans to add smart home integration, including voice control through Alexa and Google Assistant, back at CES in January.

But where TiVo’s implementation is different from other DVR makers is how it has put Alexa to use to control its devices’ unique features, like skipping the commercials – which TiVo calls SkipMode. 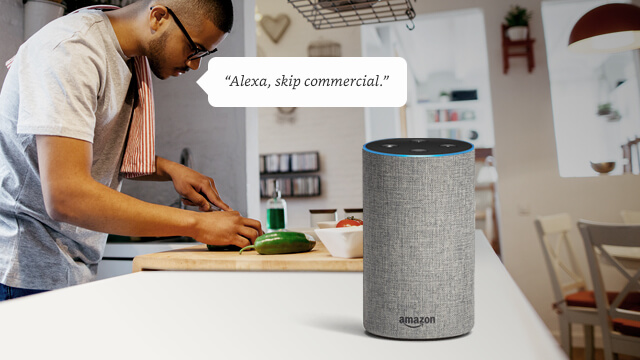 This can be done by telling Alexa to “skip commercials,” says TiVo, and it joins other playback-related skills like jumping back 8 seconds (“Alexa, go back”), pausing and playing, fast-forward, and rewind.

“With far-field voice control, life becomes more untethered for our customers,” said Andrew Heymann, TiVo’s Senior Director of Product Management, said in an announcement about the new functionality. “They can continue to enjoy watching their favorite programming with TiVo’s cool features even when they’re preparing dinner and their hands are too dirty to use the remote, or when they’re exercising, and they don’t have access to their remote. Life suddenly gets a lot easier,” he adds.

A placeholder screen for the new Alexa functionality popped up this weekend on supported devices, reports Dave Zatz, who regularly covers TiVo. The screen says Alexa is “coming soon” and will roll out to TiVo retail devices with software version 20.7.4 or later. The rollout is expected to compete by June 1st, it also notes.

The addition of Alexa to TiVo’s boxes is notable, too, because TiVo itself had developed voice-control functionality of its own. Its newer BOLT VOX and Mini VOX were the company’s first DVRs to include a voice remote control, which offers similar functionality to Alexa.

However, TiVo sold the remote separately, which limited the reach of its voice control offering for consumers. With Alexa, the company is able to go after the growing market of those who already own an Amazon Echo device.