Remember Project Jacquard? Two years ago, Google showed off its “connected” jean jacket designed largely for bike commuters who can’t fiddle with their phone. The jacket launched this past fall, in partnership with Levi’s, offering a way for wearers to control music, screen phone calls, and get directions with a tap or brush of the cuff. Today, Google is adding more functionality to this piece of smart clothing, including support for ride-sharing alerts, Bose’s “Aware Mode,” and location saving.

The features arrived in the Jacquard platform 1.2 update which hit this morning, and will continue to roll out over the week ahead.

It’s sort of odd to see this commuter jacket adding ride-sharing support, given that its primary use case, so far, has been to offer a safer way to interact with technology when you can’t use your phone – namely, while biking, as showcased in the jacket’s promotional video. (See above).

But with the ride-sharing support, it seems that Google wants to make the jacket more functional in general – even for those times you’re not actively commuting.

To use the new feature, jacket owners connect Lyft and/or Uber in the companion mobile app, and assign the “rideshare” ability to the snap tag on the cuff. The jacket will then notify you when your ride is three minutes away and again when it has arrived. When users receive the notification, they can brush in from their jacket to hear more details about their ride. 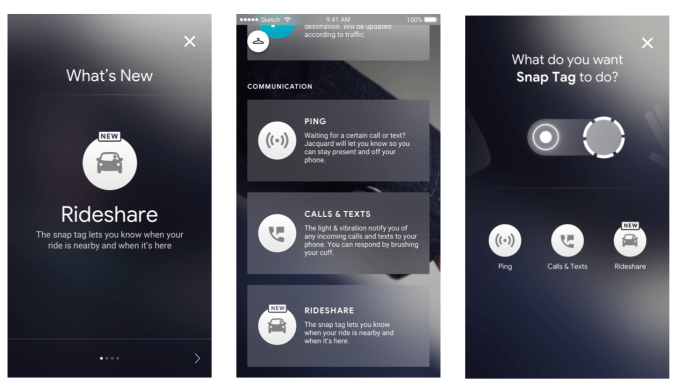 Another new addition is support for Bose’s Aware Mode, which picks up surrounding sounds and sends them to the user’s ear through supported headphones. The feature is helpful in terms of offering some noise reduction without losing the ability to hear important things happening around you – like approaching vehicles, horns, and other people, for example.

Jacquard will now allow users to turn any gesture into a toggle for Aware Mode to turn it on or off for Bose’s QC30 and QC35 headphones.

And lastly, the jacket will support being able to drop a pin on the map to save a location then see, share or edit it from the app’s Activity screen.

The jacket continues to be a curious experiment with connected clothing – especially given that much of what the jacket can do, can now be accomplished with a smartwatch these days.

Google and Levi’s aren’t sharing sales numbers, so it’s hard to speak to adoption at this point, either.

However, a Google spokesperson did tell us that “[Levi’s is] pleased with the response and continue[s] to be excited to hear from people about what’s useful and what requests they have once they purchase the jacket.”

Given the addition of ride-sharing support, one wonders if maybe the focus is expanding beyond the bike commuters crowd, to those who just don’t like having their smartphone out, in general.