There is no degree required to be a CEO of a venture-backed company. But it likely helps to graduate from Harvard, Stanford or one of about a dozen other prominent universities that churn out a high number of top startup executives.

That is the central conclusion from our latest graduation season data crunch. For this exercise, Crunchbase News took a look at top U.S. university affiliations for CEOs of startups that raised $1 million or more in the past year.

In many ways, the findings weren’t too different from what we unearthed almost a year ago, looking at the university backgrounds of funded startup founders. However, there were a few twists. Here are some key findings:

Harvard fares better in its rivalry with Stanford when it comes to educating future CEOs than founders. The two universities essentially tied for first place in the CEO alum ranking. (Stanford was well ahead for founders.)

Business schools are big. While MBA programs may be seeing fewer applicants, the degree remains quite popular among startup CEOs.  At Harvard and the University of Pennsylvania, more than half of the CEOs on our list graduated as business school alum.

University affiliation is influential but not determinative for CEOs. The 20 schools featured on our list graduated CEOs of more than 800 global startups that raised $1M or more in roughly the past year, a minority of the total.
Below, we flesh out the findings in more detail.

Where startup CEOs went to school

First, let’s start with school rankings. There aren’t many big surprises here. Harvard and Stanford far outpace any other institutions on the CEO list. Each counts close to 150 known alum among chief executives of startups that raised $1 million or more over the past year.

MIT, University of Pennsylvania, and Columbia round out the top five. Ivy League schools and large research universities constitute most of the remaining institutions on our list of about twenty with a strong track record for graduating CEOs. The numbers are laid out in the chart below: 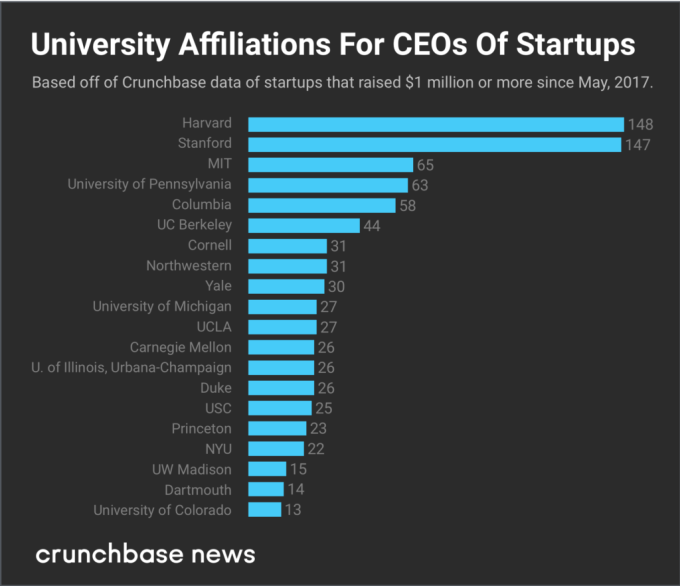 Yes, Bill Gates and Mark Zuckerberg dropped out of Harvard. And Steve Jobs ditched college after a semester. But they are the exceptions in CEO-land.

The typical path for the leader of a venture-backed company is a bit more staid. Degrees from prestigious universities abound. And MBA degrees, particularly from top-ranked programs, are a pretty popular credential.

Top business schools enroll only a small percentage of students at their respective universities. However, these institutions produce a disproportionately large share of CEOs. Wharton School of Business degrees, for instance, accounted for the majority of CEO alumni from the University of Pennsylvania. Harvard Business School also graduated more than half of the Harvard-affiliated CEOs. And at Northwestern’s Kellogg School of Management, the share was nearly half.

While the educational backgrounds of startup CEOs do show a lot of overlap, there is also plenty of room for variance. About 3,000 U.S. startups and nearly 5,000 global startups with listed CEOs raised $1 million or more since last May. In both cases, those startups were largely led by people who didn’t attend a school on the list above.

Admittedly, the math for this is a bit fuzzy. A big chunk of CEO profiles in Crunchbase (probably more than a third) don’t include a university affiliation. Even taking this into account, however, it looks like more than half of the U.S. CEOs were not graduates of schools on the short list. Meanwhile, for non-U.S. CEOs, only a small number attended a school on the list.

So, with that, some words of inspiration for graduates: If your goal is to be a funded startup CEO, the surest path is probably to launch a startup. Degrees matter, but they’re not determinative.